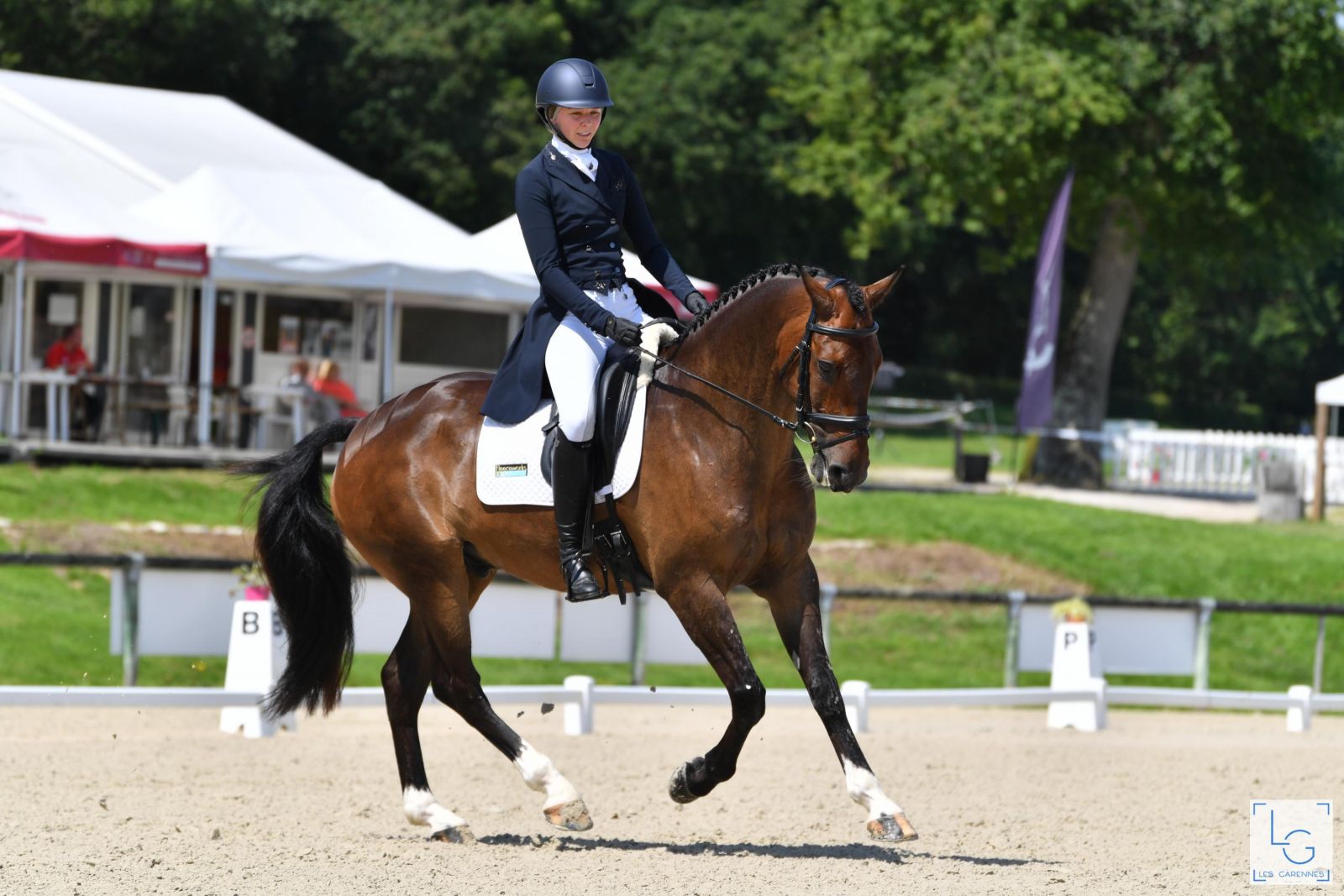 It’s hard not to make an American girl in Paris reference any time we spot a U.S. rider competing anywhere in France – probably offending our French readers every time we do, to be fair – though I suppose not everyone reading this will have been as diehard of a Sex and the City fan as I was (am?). I digress, though – the more important piece of news here is that the U.S. is represented this weekend at Le Grand Complet at Haras national du pin in Normandy, France by two talented women and we spent some time catching up with them as we settle in for an exciting weekend of international action.

You probably recognize Avery Klunick as a former Area V young rider who took a trip to Kentucky with her late partner, In It To Win It, and who has worked with Bea and Derek di Grazia as well as Boyd Martin through the years. Earlier this year, Avery packed up and moved to the UK with her young up-and-comer, Pisco Sour (Metropole – Heathlawn Cailin, by Clover Park), to base with Australian riders Emma and Kevin McNab (who himself is fresh off a team silver medal finish in Tokyo). This weekend in France, Pisco Sour makes his CCI3*-S debut after stepping up to the Intermediate level at Aston-le-Walls in July.

Avery took a step back from riding full-time a few years ago after losing “Winston” to colic in 2016. In the interim, she found a job working for JP Morgan Private Bank. After transitioning to remote work in 2020, Avery found that she might have the flexibility to pull off an overseas move, something she’d always wanted to do. Now, working on U.S. hours while also riding Pisco Sour and several others on the McNabs’ yard, Avery says she’s definitely tired more often than not, but she can’t believe her luck that she’s ended up in this place.

This is Avery’s first three-star since 2016, and she and Pisco Sour earned a 30.5 to sit in early 16th place. “I’m thrilled with our test today,” she said. “I haven’t done a three-star since 2016 so I am knocking the rust off as Pisco gets more confident in the half-passes and simple changes. This is Pisco’s second run at the Intermediate/three-star level, so I’m looking to give him a confidence-building ride in the jumping phases.”

Avery will have a day off tomorrow before tackling Quentin Perney’s show jumping on Saturday and Pierre Le Goupil’s cross country track on Sunday. Avery is also taking over our Instagram story all weekend long (and she’s got enough pastries to go around!), so be sure to follow us on Instagram for all the French eventing you can handle! 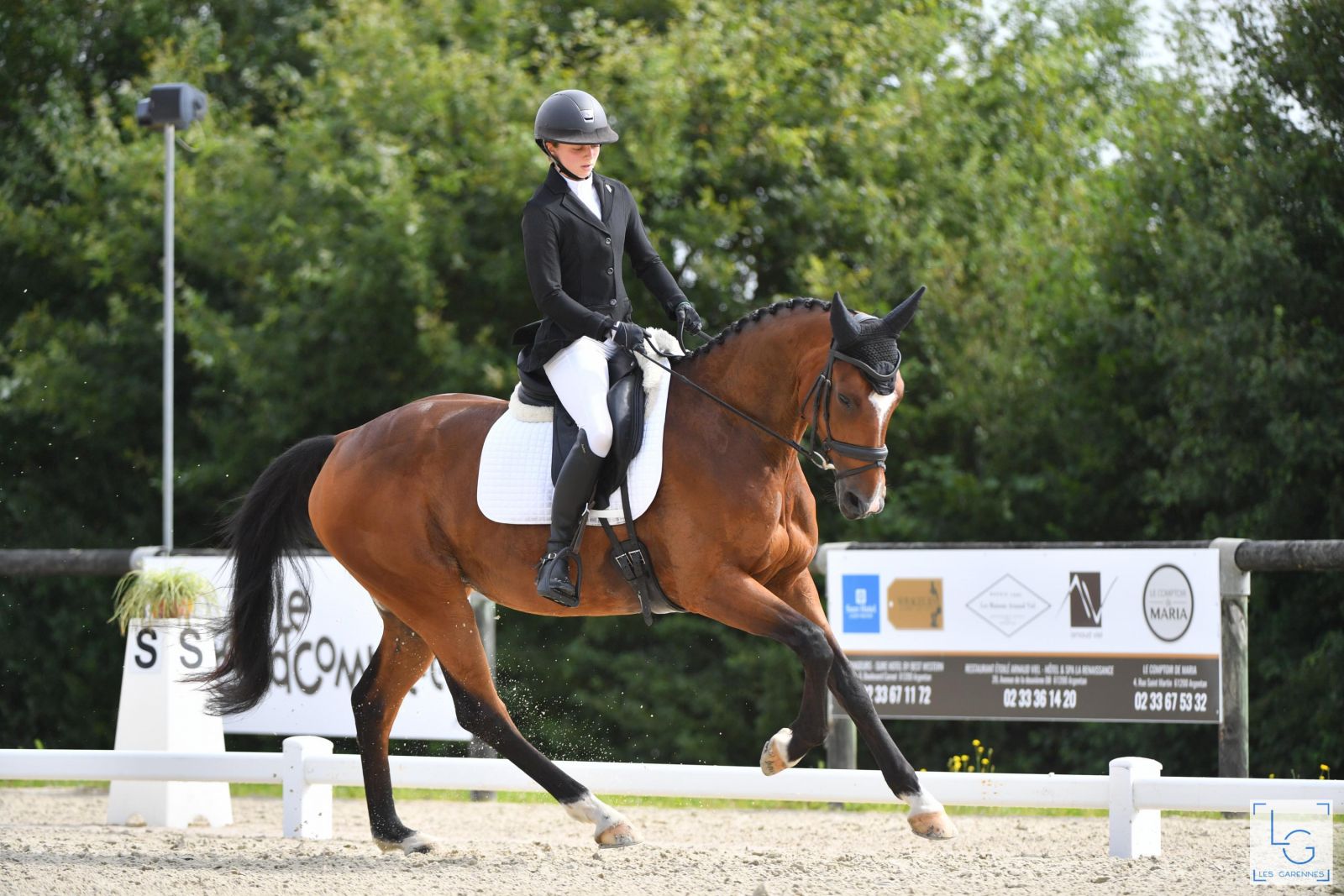 Nina, who was born to French parents in the States but has since been living full-time in France, began competing internationally under the Stars and Stripes in 2017. Previously working with Karin Donckers and Ludwig Svennerstal, Nina, 22, currently bases in Normandie and trains with Astier Nicolas.

This weekend is the first FEI start for “Filippines”, and confidence as well as qualification is the goal as the pair contests the CCI2*-S together. They scored a 34.3 in the dressage today and will show jump tomorrow.

There is plenty of action to keep up with from France (and Great Britain, and Canada, and other places I’m sure I’m leaving out) this weekend, including a Nations Cup competition where Germany’s Josephine Schnaufer-Völkel and Pasadena 217 are the early leaders after the first day of dressage on a score of 24.4. France holds the early team lead thanks top-five tests from Gwendolyn Fer and Romantic Love (26.3) and Sebastien Cavaillon and Sarah d’Argouges (28.3). There are several Olympians fresh off the plane from Tokyo competing this weekend as well, and we must give Swiss rider Robin Godel a proper shout as he’s got his chin up competing this weekend, earning a 27.5 for early third place aboard Grandeur de Lully CH.

You can keep up with the scores from France here – and stay tuned for more right here on Eventing Nation!