We’ve got an excellent contingent of American, Canadian and American-based Australian riders tackling Badminton this week, which means we’ve got plenty to catch up on after the majority of them rode their dressage tests today. It’s either a first time or a return for the first time in many years for these riders, so the palpable energy has been gratitude to be here — mixed with a bit of good-natured tolerance of the first bit of competition!

On Friday we’ll see the remainder of the North Americans ride as follows:

Mike Winter’s daughter Amelia, who runs the Team Canada Instagram page, will be doing a takeover of our @goeventing story tomorrow — be sure to follow along!

Now, let’s catch up with the U.S. riders who rode today as they passed through the mixed zone: 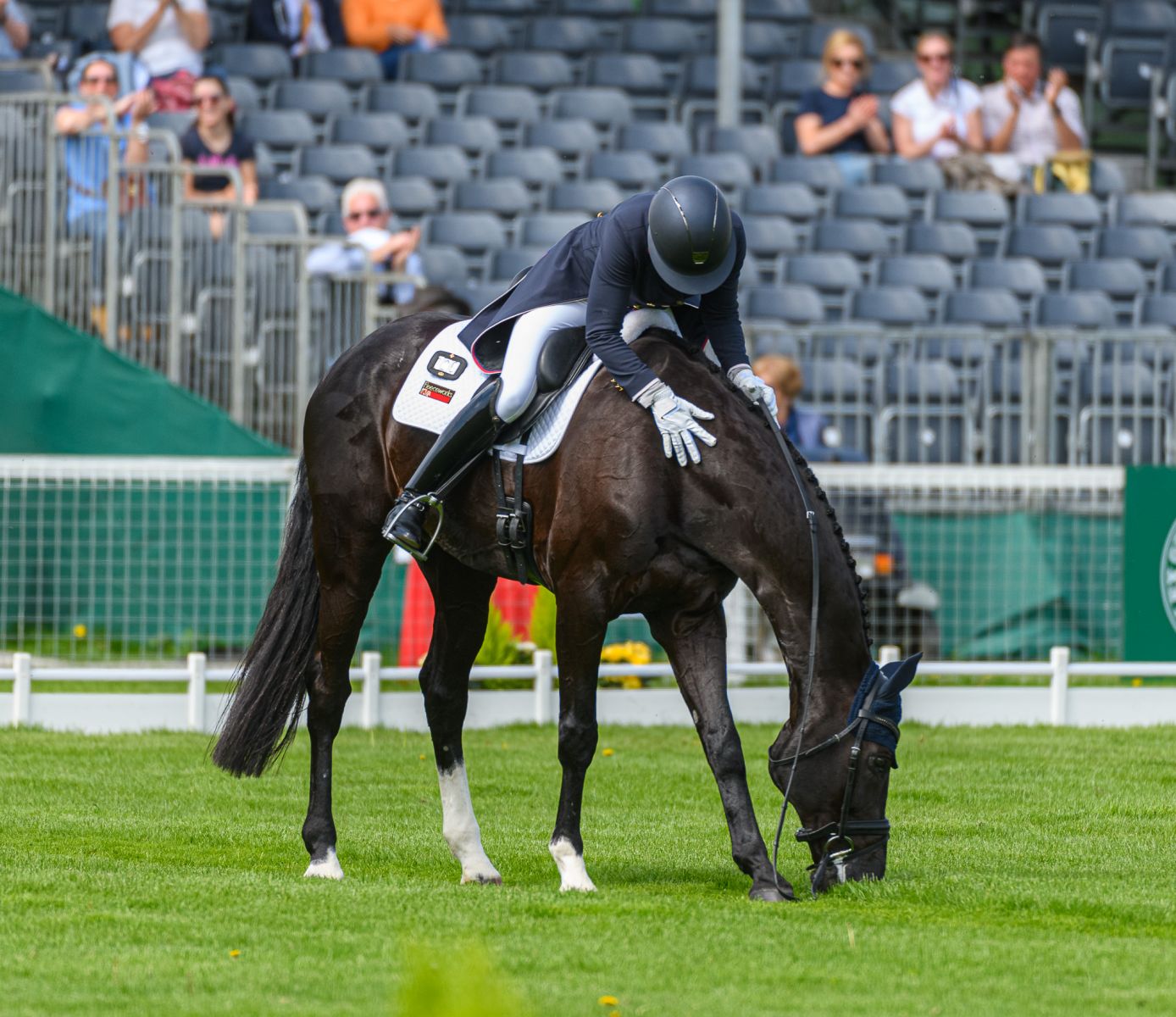 On her dressage test today: “I was really pleased with him – he’s been on on fire all week and he was just really with me. He got a little bit overwhelmed by the crowd but held it together.”

“On grass you don’t get the same kind of pushing power you’d get in the arena, and he wouldn’t be experienced with that. He’s never made me nervous going into dressage before, and I yesterday I was slightly like, ‘oooh — this isn’t what I’m used to!’ But he’s never been this fit and ready to go, and I was really pleased with everything. He could have maybe gone a little bit more forward, but when I went to ask for that he broke to canter, so I just played it a little bit safe there.”

On her plan for Friday’s “day off”: “I’ll probably take him out for a little gallop and we’ll jump school, but [I’ll mostly be] walking the course and studying my lines to be prepared for Saturday.”

On the decision to bring Mai Baum to Badminton: “He did Kentucky last year and…I feel like he’s the best horse in the world. He’s just an unbelievable creature, so I want to be at the best event in the world with him. It’s not every day you have a horse to take to Badminton, and I feel like I do — so I could have played it safe and gone to Kentucky but, you know, neither one of us have 30 years ahead of us. So we’re ready!” 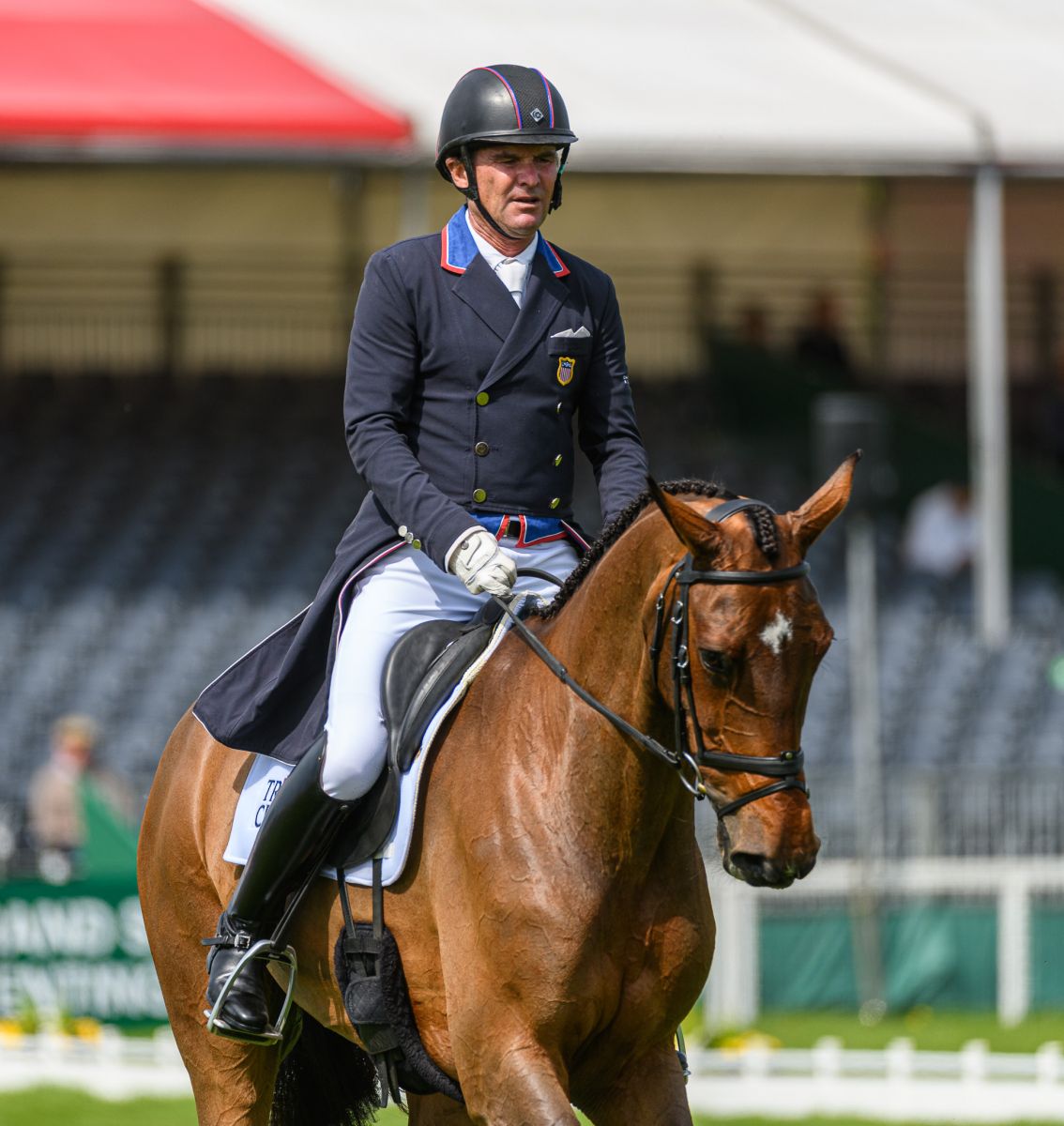 On his dressage test: “Well, I’m pleased with where we’re at because yesterday with the [Grassroots Championship] cross country going, he was all confused and was pretty wound up. And so that’s carried over a bit to today. I was just trying to sit there and keep him as quiet as I could, so it could have been a lot worse. In hindsight, I wish I found a better place to work him yesterday. But anyway, it’s all great experience, and we’re just so grateful to be here.”

On Z’s attitude and work ethic: “He’s a bit of a workaholic and loves to work. But he does overthink it a bit — at home he’s really quiet, but at the shows he can be a bit of a handful. But lately, he’s figured out in the dressage to be quiet, and then I don’t care so much if he gets wound up on the cross country day. That’s why it got a bit confusing for him yesterday, I think because he saw all the horses galloping around. He came out of the stall shaking in anticipation as he thought he was going cross country. So I’ve worked him a lot and spent some time trying to get through to him that he doesn’t need to worry about cross country yet.”

On the decision to bring Z to Badminton (Phillip has not competed here himself since 2003): “Obviously this is arguably the best event in the world and, I don’t know, I’m not getting any younger. So I’d like to experience it again. And this is the right horse for it, and all the owners decided to be a part of it as well.” 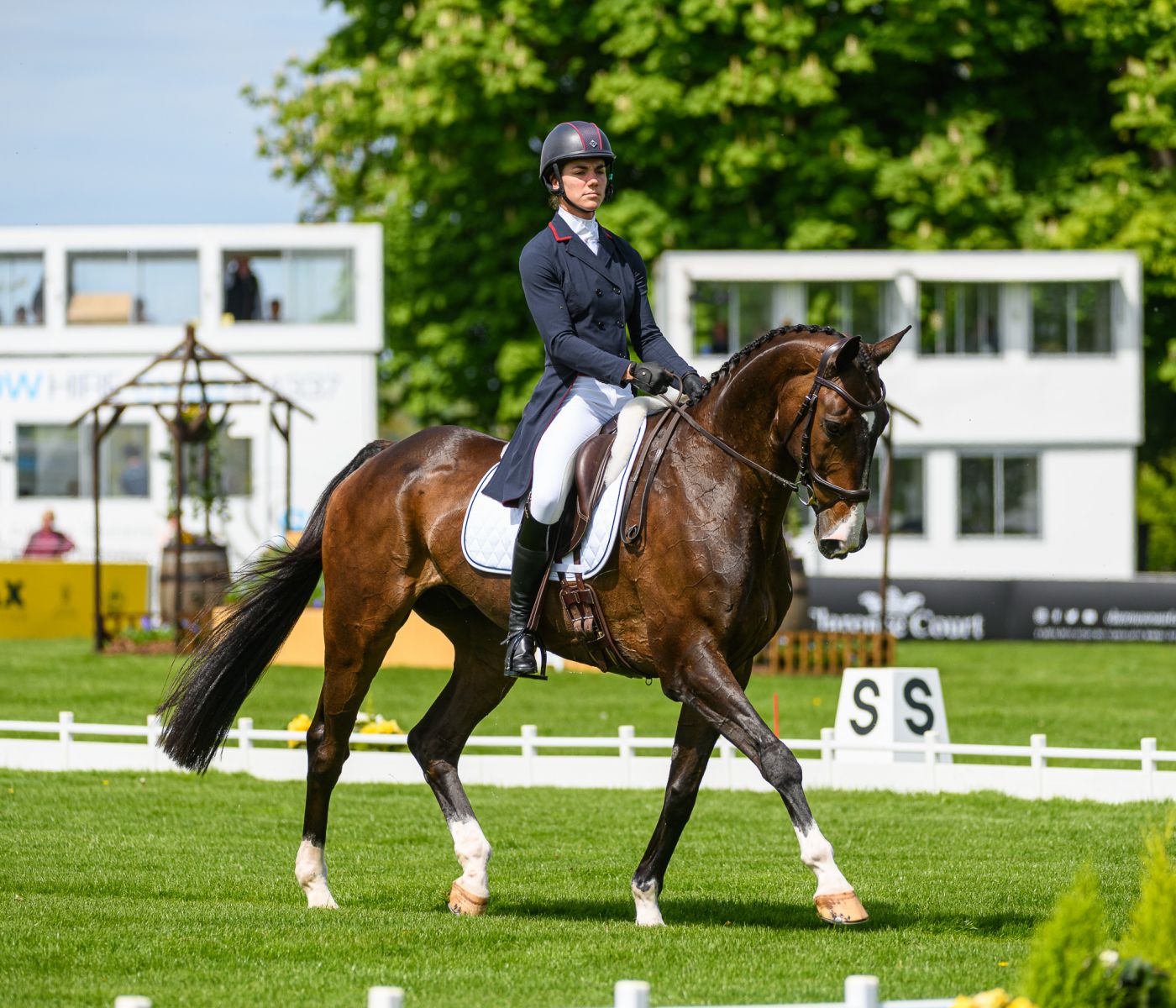 On her test today: It’s not what I was hoping for. He’s been getting better and better in the dressage each time he’s run a five-star, so we’ve been sort of slowly creeping marks down, but dressage is just not his strength. He gets a little exuberant and quite tense. So this was not quite what I had hoped for. He got a 33 at Luhmühlen last year but, you know, he’s just been a lot more keyed up this week, really feeling the atmosphere.”

On the atmosphere at Badminton today: “My horses haven’t had a whole lot of opportunity to see crowds. You know, in the last couple years, there were no spectators at Luhmühlen and no spectators at Kentucky last year. So I mean, I did go to Aachen, but that’s later in the season, so they’ve been out a few times — so this is a lot. I mean, at least for mine, this is the first time he’s been in front of the crowds this year.”

On Eric Winter’s cross country course: “It looks really, really fantastic. It’s good to see it’s a different type of track than I’ve seen before, but I think it’ll suit my horse. Lots of big jumps and lots of galloping to do so I think it’ll be right up our alley. He’s got a massive stride and a huge jump and he just loves to run and take things on. So I think that this will be great for him. You know, last year was a bit of a learning year for both of us and that we went to Luhmühlen and then we went to Aachen and did sort of the twisty or more technical tracks just to gain mileage. But yes, I think this is back to old time, cross country roots of running and jumping. So I’m excited to get out there.” 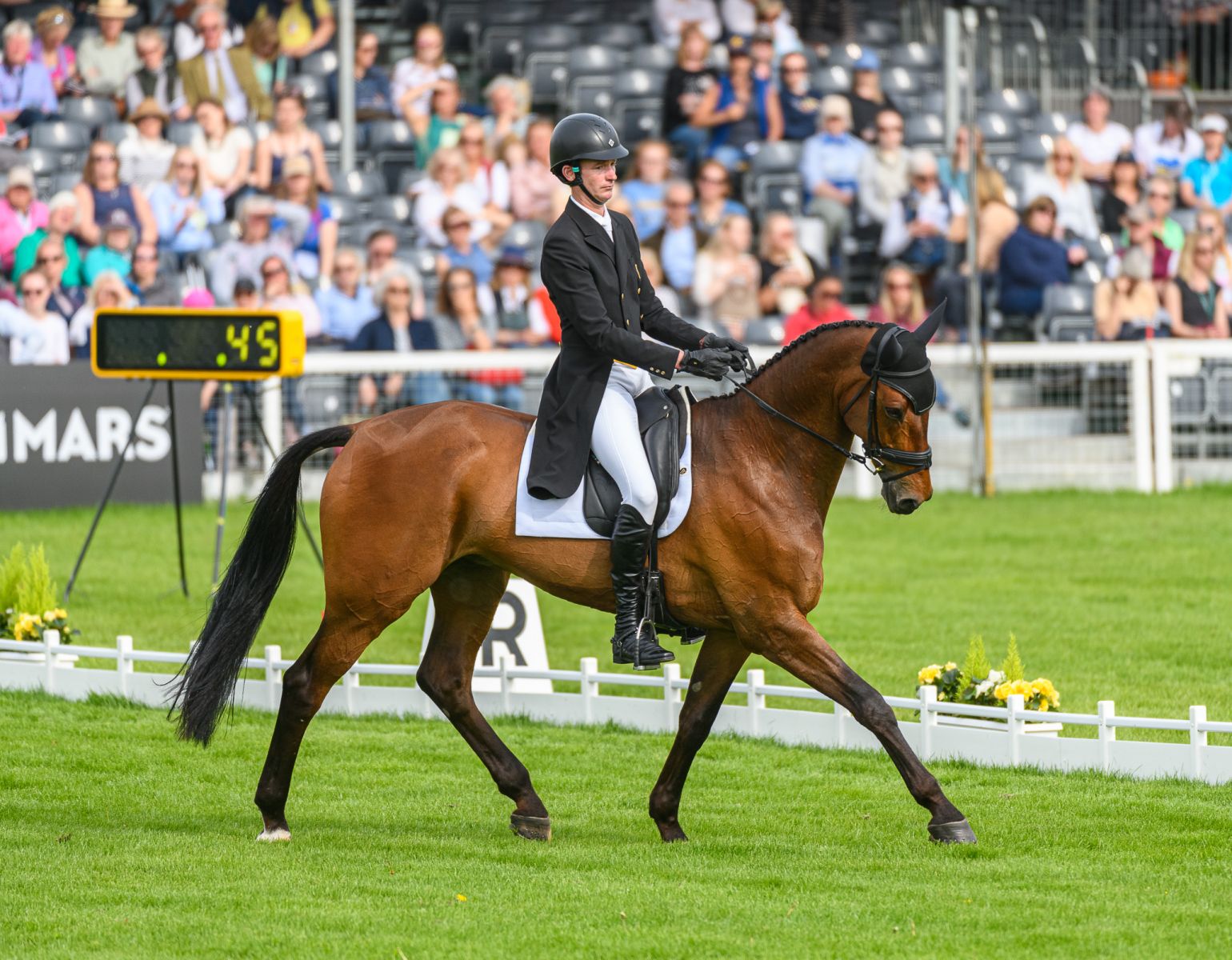 On his test: “You always wish there could be a bit better. So I guess that’s the biggest thing but I’m happy with him for today and there’s always room for strong improvement.”

On the cross country course: “Yes, that’s impressive. So that’s really something, and just the magnitude of the atmosphere and the decoration and it’s definitely not a dressage show. There’s a lot of work to do this week. 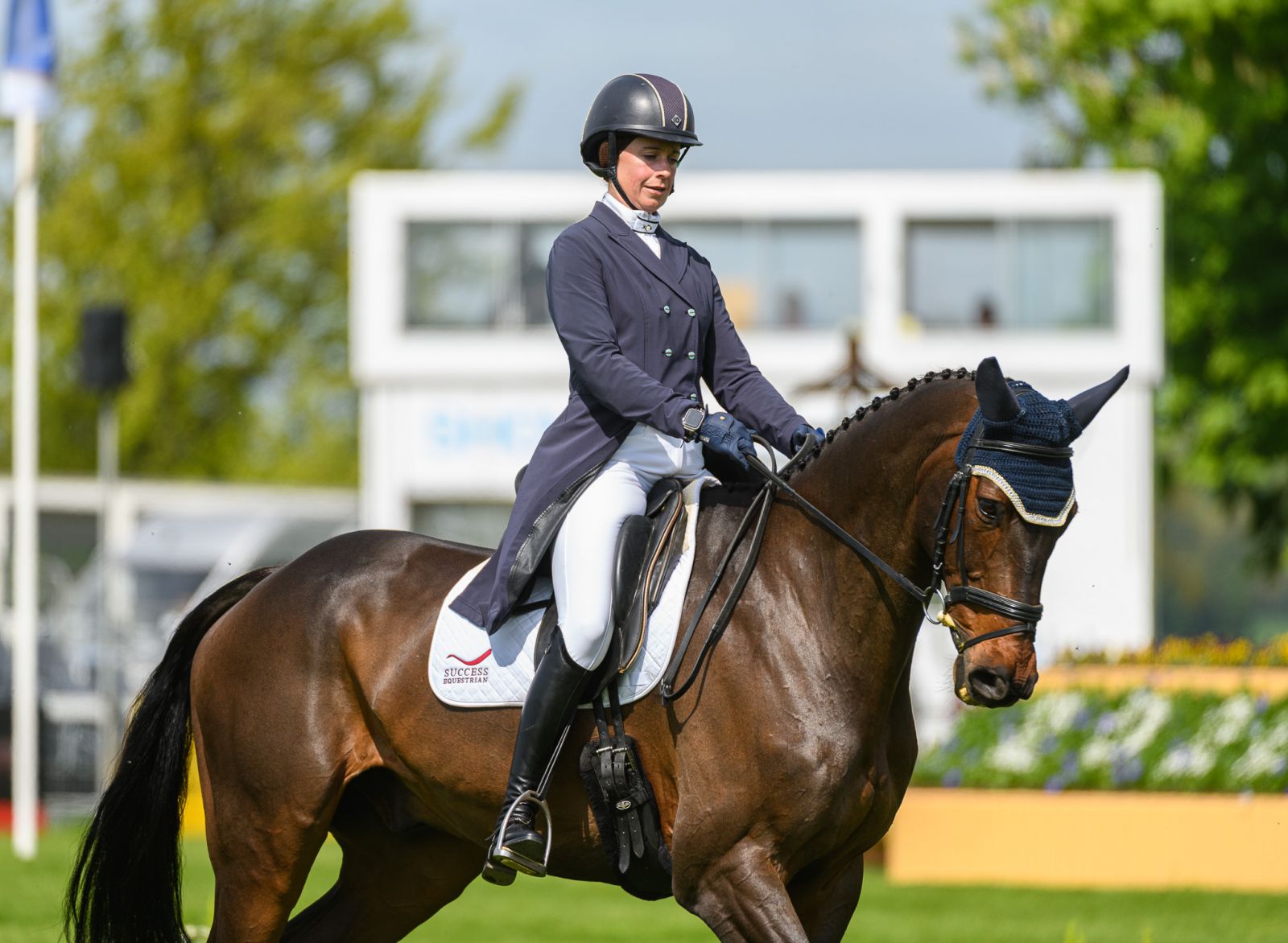 On her test today: “This is not his phase, I will admit. I went in there and thought, ‘oh’, like he got that feeling like he was going to absolutely blow a top. But he was really good. I’ve never felt him that tense and still ride that sort of okay in the test. So I mean, I know everybody’s got their own standard for what they’re looking for here. I brought a jumping horse, not a dressage one, and I’m happy with him. He’s a good horse and the dressage is hard for him. He’s really long, so it’s made him nervous because it’s physically hard for him. But I’ve been riding this horse for ten years, and this is actually my tenth five-star, so I know him really well. I know not to get my hopes up about this phase — and that’s why I bring him here, so that we can hopefully climb our way up.”

“When they’re 16, they are who they are, and if I come in here thinking I’m going to lay it down on the flat — that’s not fair to him. I’ve got to accept him for who he is. Now I do expect him to lay it down in the jumping, so we’re going to go out there with some expectation.”

Her thoughts on the cross country: “I don’t know what to think. It’s big! You need a horse that turns really well, that’s my takeaway. And you really need to know where you’re going. I think people who have never been here before, like myself, have a bit of a disadvantage. So I’m going to walk it like seven times if I can stand it! I found Burghley super confusing when I first went there. This is less confusing — you sort of do the cross country courses like a big circle around the property. It’s flat, you can see all your points of reference.”

On the decision to come here to Badminton: “By the end, I’ll be thinking this is the most fun thing I’ve ever done but for now I’m like, ‘what was I thinking coming here, I should have gone to Kentucky!’….This horse has afforded me the luxury of going to big events. He’s taken me to Burghley, taken me to Kentucky. He’s taken me all over the place. And like, I was like, you know what? I better go [to Badminton] just so I can figure it out with the horse I know really well. And a horse I know it doesn’t matter if the jumps are the biggest things you’ve ever seen. He doesn’t care about that.” 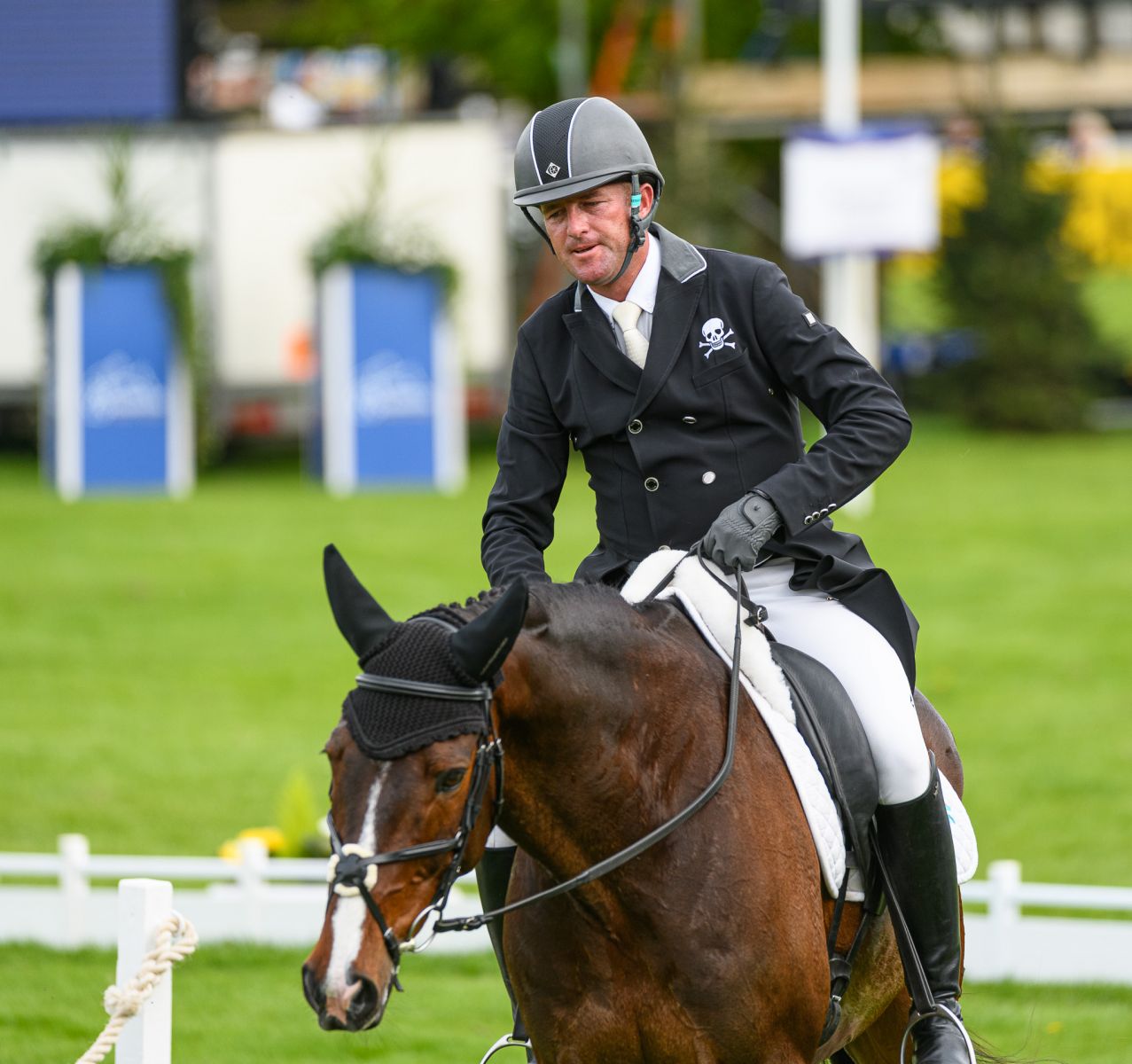 On Mama’s Magic Way’s dressage test: “He stayed rideable-ish in there. I was getting run off with everywhere, but he’s so talented. It’s just getting his mind in the right spot. We wish we could just do our dressage at home and then just send videos in for them to judge! I was hoping they would start doing that with COVID. My EquiRatings would have gone way up! But it’s not a dressage competition — Saturday is the big test. The score is disappointing, but I was happy that we didn’t have any complete blowout meltdowns.”

On the decision to bring Mama’s Magic Way here: “I did Badminton 17 years ago. It was the last year it was long format, and I’ve always wanted to come back. And although I’ve had horses at the five-star level in the past 17 years, it always never kind of fit in and this year, you know, Jennifer Mosing who owns him said let’s go to Badminton, so here we are.”

On returning to Badminton for the first time since the great Antigua: “It’s fun to be back. I was 23 when I was here last and now I’m 40 — Antigua is the horse that gave me a career, and I did my first Badminton on him, my first Burghley on him, my first Pan American team, my first World Equestrian Games. So that horse was so many firsts, and I unfortunately lost him last year at the age of 34. He looked a million bucks ’til the day he died.”