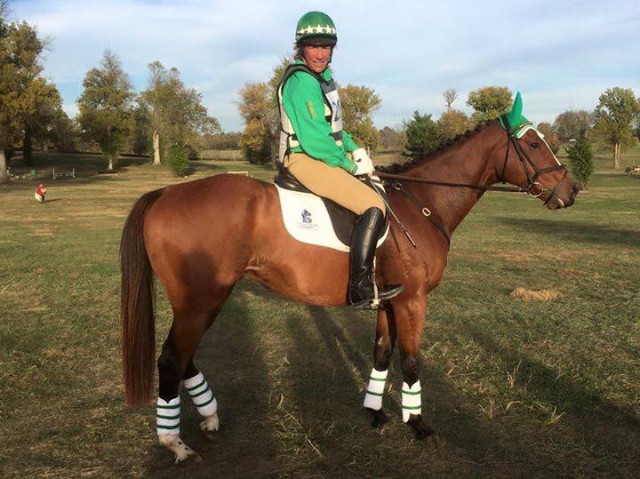 The move indoors with a more powerful PA system, music, banners, lights, and a big supportive crowd proved to be a whole new challenge for competitors in many of the disciplines Saturday morning, and it soon became a battle of which proven and elegant mount could handle the atmosphere and still demonstrate their qualities.

Speed Rail was the final of the three horses to compete in the eventing portion, and the six-year-old gelding stayed composed and businesslike throughout the final test. ‘Speedy’ handled the flatwork, stadium jumps and a handful of cross country fences like a veteran, and for his quality and steadiness was awarded top prize and a $5,000 check.

Bred in Indiana (Purge x Five O’Clock by Saratoga Six), Speedy was last raced a little more than a year ago and was a stakes-placed contender in his region. He had 17 starts and three wins in his previous career, and can now add a W in a new sport to his list of accomplishments. According to Cathy, Speed Rail will be competing in the novice division at River Glen Horse Trials in two weeks and then be headed to his new owner, Jessica Bollinger.

Cathy also claimed the third place title on her mount Title Contender.  ‘Sheldon’ is a Pulpit baby (out of Winter Garden by Roy) who once sold at the Keeneland auction for $310,000 and made back that money and more in his racing career, offically raking in $343,153. He had 27 starts, 7 wins, and multiple Graded Stakes race wins. Sheldon is also for sale!

Elisa and ‘Henri’ put in a strong final performance to cap off a great weekend for the pair, and Elisa seemed pleased that he mostly kept it together in the big environment.

“He was a little amped up for the show jumping,” Elisa said on her Facebook page. “But he did everything I asked, well, except for the halting!” But she clearly couldn’t have been prouder. Henri is a 2010 gelding who had 32 starts on the track, earning just shy of $60,000 in his career.

All three horses in the eventing final were also cross-entered in the Freestyle class, showing off their superior manners and sensitivity, as none of the three wore bridles in their performances.

Cathy and Speedy were also invited back as winners of their discipline to take a shot at title of America’s Most Wanted Thoroughbred, where they made a strong showing against extremely tough competition.

The Most Wanted title was awarded to Fairway King, trained and ridden by Lauren Turner. The pair made it to the finals by way of winning the dressage division, but coincidentally, Lauren is also an eventer. She recently retired her longtime mount after completing their first one-star together, and Fairway King was meant to be a short-term project, Lauren told Thoroughbred Daily News. “The money we just won means that I get to keep him,” she said, her eyes brimming over with tears.

According to spectators, Lauren won them over with his massive, relaxed free walk and his audacious, no-holds-barred finishing gallops.

Congratulations to all the competitors, and keep it locked in EN for more stories from the Thoroughbred Makeover!

Correction: A previous version of this article described Speed Rail as a mare. We have corrected the language to reflect that Speedy is in fact a gelding.