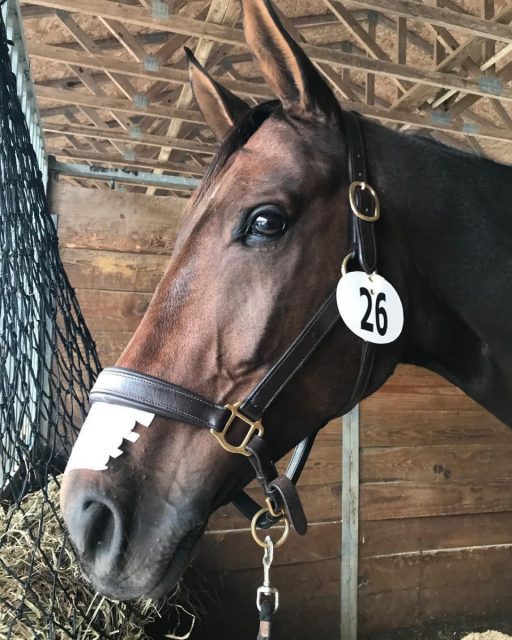 In the CCI1* Andrew McConnon and Bossinova, his own 8-year-old Hanoverian gelding (Bonifatius x Dawina, by Der Lord), had a cracking round in the horse’s first CCI run.

“He just does everything I ask of him,” Andrew says. “Hugo” came out of the box positive, Andrew says, and demonstrated his get-the-job done work ethic at the first water, which was quite deep. They stepped in conservatively, which put them off their stride to the next element, but Hugo stuck it out. “He was just incredible to hold his line and hunt for the flags.”

After that they got into a good rhythm and he was a professional through, Andrew says. A late combination at #19, a turning question of chevrons complicated by terrain, caught out a couple horses, but Hugo navigated it handily. “It was as if he’d walked the course,” Andrew says.

They came home clear and fast. “I looked down and we were well ahead of time the last couple minutes so we just cruised home,” Andrew says. “He pulled up and wasn’t even breathing, which made me happy for his first CCI.”

EN blogger extraordinaire Amy Nelson took time from her own busy competition weekend to film some clips of CCI1* cross country. Here’s Andrew and Hugo through the second water:

A few more cobbled together dispatches from the field … fifth-placed Laura Crowl and Dinner at Malones:

Ninth-placed Hillary Irwin and By A Hundredth:

This wonderful guy jumped double clear around his first CCI* today. So so proud of him not only for jumping around but for stepping up when I wasn’t perfect and still trying his hardest. I can’t help but remember his wiggly, spooky five year old self that didn’t know how to gallop and was so unsure on xc. Today he was all confidence and class. Producing him has been nothing but fun. Onto tomorrow, no matter the outcome, he’s a star in my eyes ⭐️🐲💖 #5o1macintosh #5o1sporthorses #goeventing #blackdragon #hagyardmidsouthteamchallenge

It was a brisk 50 degrees for the final horse inspection this morning. “The horses were feeling fresh,” Andrew says. “It felt a lot like Europe!”

Sixteen-year-old Elizabeth Henry and Charlotte La Bouff, her own 10-year-old warmblood mare, maintained their lead in CCI1* Young Rider/Junior division, adding nothing cross country to their dressage score of 24.9.

“I was over the moon with my dressage test,” Elizabeth says. “She felt amazing — as always there are things to work on and make better but it was one of our best tests.”

The pair was foot perfect on cross country this morning. “It was a really fun course with some technical distances and combinations,” Elizabeth says. “Cross country is Lottie and I’s favorite phase! We had an awesome double clear run; Lottie felt ready to go as she usually is. I am so lucky to have such an amazing horse like her for both of our first one-star. We both love what we do and want more than anything to do our absolute best.”

One-star show jumping begins at 1 p.m. Best of luck to all! 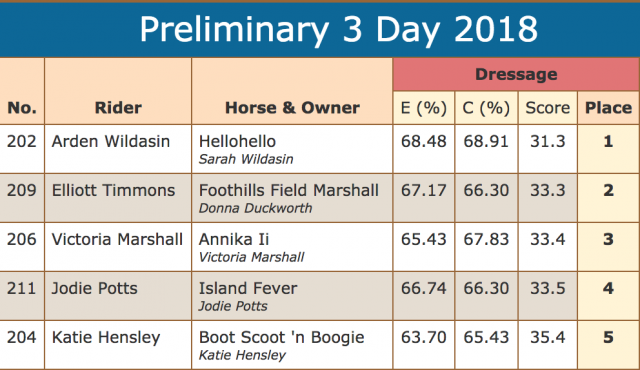 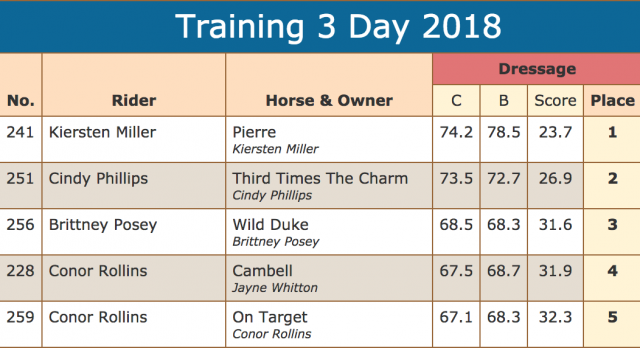