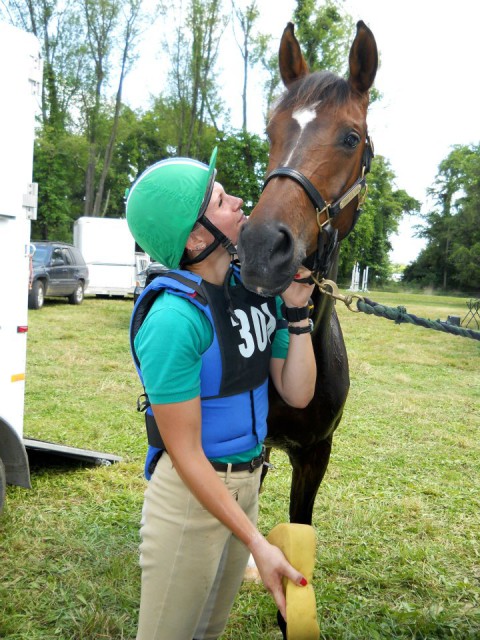 La in her element.

Eventing is a sport of breathtaking highs and gut-wrenching lows, and every person involved in this sport has probably experienced each of these at least once, if not several times over. We carefully select our horses based on breeding, conformation, and other factors; we keep our horses in rigorous fitness programs; we consult regularly with our vets and farriers about our horses’ health and soundness; we provide the best nutrition that we can; and we carefully monitor our horses’ mental and emotional states at all times to ensure that they are happy.

We commit an inordinate amount of time and money to guarantee both our horses’ well-being as animals and their success as athletes. But even after all that we still have to accept the fact that, no matter the talent or the heart, some horses simply will not hold up to the demands of eventing.

After donating my would-be Young Riders horse to the Park Police after four years of vet bills and only four trips down the centerline, I was no stranger to the disappointment that is an unsound horse. I hoped that La, my new Oldenburg mare, would be my next upper-level horse.

I bought La in 2009 from a small dressage barn in Virginia. Her dam was competing at the Grand Prix level in dressage and her sire was a successful Grand Prix jumper. On paper, La had all the tools she needed to be a successful event horse. However, a period of time spent in a Wellington jumper barn had destroyed her confidence and had instilled in her an intense fear of jumping.

Through some connections who were familiar with her during her jumping stint in Florida, we determined that La had likely been exposed to some “alternative” forms of training. This manifested in a horse who, though very tidy with her knees, could not even stand in a jumping arena without panicking and washing out. The sound of another horse dropping (or even tapping) a rail was grounds for a complete meltdown.

I spent most of my first year with La just hand-walking over ground poles. This slowly progressed to exaggerated, somewhat erratic jumping until finally, about two years later, her brain started to catch up to her body (or maybe it was the other way around).

Once we established a baseline of trust, I cautiously introduced La to eventing. Her first year of competition was littered with Es, penalties of 20 and 40 points, and one RF. But finally, sometime during our second competition season, something just clicked.

After a handful of clean runs at the Beginner Novice and Novice levels, La transformed from a nervous, green, ex-dressage horse/failed jumper to a capable, confident event horse who would explode out of the start box in her zeal to get out on the cross country. After her second Novice, it was rare that La ever added a point to a dressage score.

We concluded the 2013 season with a spotless record at the Training level. The 2014 season looked promising, and I planned to move her up to Preliminary during the summer after spending the winter in Maryland. However, the year got off to a rocky start when La was diagnosed with Equine Polysaccharide Storage Myopathy (EPSM) in early March.

EPSM is an inherited metabolic disease caused by a dysfunction in the way the muscles synthesize and store glycogen. The disease is often characterized by lethargy, exercise intolerance, shifting lameness, muscle soreness, mild colic and muscle wasting.

Unfortunately, these signs can look like a lot of other problems, especially when experienced independently of one another, thus making the condition tricky to diagnose. By the time my vet and I came to the conclusion that EPSM was the problem, La had already lost a significant amount of weight and muscle and had been in only very light work for a couple months.

Although there is no cure for EPSM, it can be successfully managed through a low starch/high fat diet and a strict exercise regimen. With a diet change, La made a complete 180 (quite literally, overnight) and was quickly back on track to start the 2014 season, albeit a bit late.

We finally got to our first event of the year in July and ran two more Training events before I made the decision to move her up to Prelim in September. We did a fantastic cross-country clinic with Jimmy Wofford in August, and I was feeling confident about our move-up. 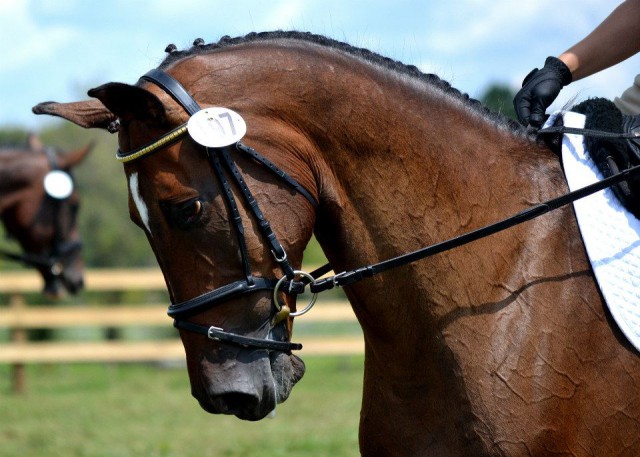 I continued prepping La for the new challenges she would face at Prelim, but in late August she started to tell me something was wrong. It began as a very mild lameness. For the most part, La worked out of it within 10 minutes or so.

This is also very common for the type of lameness you see in EPSM horses so initially I was not too worried about it. However, the lameness persisted. She had no irregular heat or swelling anywhere. No sensitivity. My vet and I poked and prodded and palpated daily while La stood by indifferent.

She did not display the typical head bob nor did she seem to favor any leg in particular. The lameness was so subtle, in fact, that you had a better chance of hearing it in her footfalls than you had in seeing it. For a month we tried test after test, treatment after treatment, with the lameness never getting better (but also never getting worse).

Finally my vet suggested I bring La in for a bone scan in the hopes of getting a conclusive prognosis. Three days later La was on the way to her appointment at Virginia Equine Imaging.

When two vets call you at your office in the middle of the day and tell you, “I’m trying to come up with some good news for you here (pause),” you know you’re about to have your heart broken. In a matter of 10 minutes, I learned that my teammate of five years, whom I had hoped to be competing with at the upper levels for years to come, might, with aggressive treatment, have a very, very slim chance of returning to her current level of work. There was very little hope of her progressing beyond that. Both vets suggested a career as a low-level dressage horse.

This news sparked weeks of fluctuating emotions not unlike those you experience when mourning the death of a loved one: sorrow, anger, resentment, guilt. Over the coming weeks I would become angry with myself, then with her, then would feel guilty for feeling that way.

Some days I would inexplicably resent her, and knowing this was nothing she could help, would feel guilty for that, too. Some days I got myself excited by the prospect of starting a new horse, would look around the CANTER website for a while, and then would feel extreme guilt for that.

I continued to stop by the barn after work every day to groom and hand-graze her. Most days I didn’t want to, having preferred to just hide from the entire situation, but I always felt better when I did. I was happy to see that La was completely oblivious to this turn of events and seemed content to be hanging out and eating instead of working.

While I was trying to deal with this flood of emotions, I was also trying to be as practical as possible — something that is very difficult for me as I tend to think with my heart, not my head (something I’ve learned will get you into trouble with horses every single time).

So what do you do with a retiree/lay-up when you pay full board and don’t have your own place to keep her? I knew that I did not want to sell La or give her away. And even if I did, she was going to need a significant amount of time off before I was able to move forward.

At this point my priority was finding La a suitable living situation at a lower cost. Fortunately, the equine community is a tight-knit group and I received an outpouring of offers to take her in.

I’ve been reflecting on why this whole thing has been so hard to deal with emotionally, and I’ve finally come to the conclusion that it was the surprise factor. When I’ve ended relationships with other horses, it has been because I was ready to move on to something else.

Was I sad when they left to go to their new homes? Sure. But in knowing that you will be selling that horse, you can begin to emotionally distance yourself from them so that it doesn’t hurt as much when they leave. But with La, I wasn’t ready to move on. We had really only just hit our stride, and I was looking forward to the future with her more than ever.

I can’t tell you how many times I’ve returned to the realization that the Fair Hill August horse trials would be the last time we would ever leave the start box together. I think it’s the finality of it that’s the most nauseating.

With the peace of mind that La is thriving in her new home, I have begun the process of shopping for another event prospect. Most days it’s fun and exciting, though some days I feel hopeless, as if I’ll never find anything better than her. I constantly struggle with the idea of replacing her even though I know she could never really be replaced.

La’s full name is C’est La Vie, and never has a horse been more aptly named. The French phrase, which translates to “that’s life,” serves as a reminder that things happen that are beyond our control. We can’t blame ourselves, our horses, or our sport for it.

So maybe it’s time I take a lesson from her, accept that “that’s life” and try to move forward.