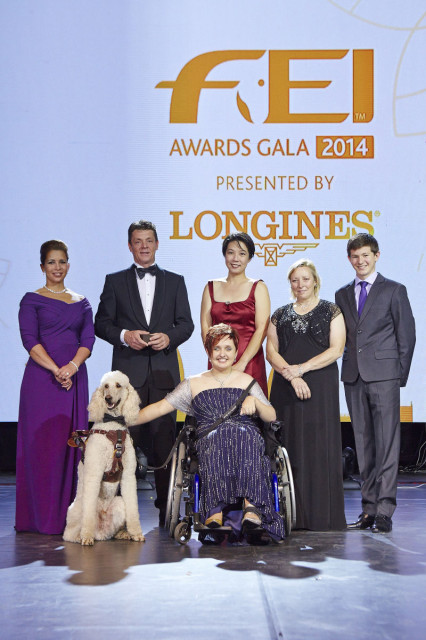 Nominations are now open for the annual FEI Awards, which serve to honor the world’s exceptional equestrians and salute excellence, courage, commitment and dedication in the sport.

“Our sport is unique and extraordinary,” FEI President Ingmar De Vos said in a statement. “Our athletes and everyone working in the equestrian community have amazing track records of success, incredible personalities and fascinating back stories. Time and time again as spectators and on television we see sensational victories, but there is so much more to our sport than meets the eye.

“These awards honour everyone who makes our sport happen, highlighting the true value of horse sport and its contribution to our global society. HRH Princess Haya created these important awards and I am proud to continue this tradition, which is now part of our community.”

This year’s winners will be celebrated during the glamorous FEI Awards Gala in San Juan, Puerto Rico on November 13, 2015.

Longines Rising Star Award – This award is for a person aged 14 to 21 who demonstrates outstanding sporting talent and commitment. Seventeen-year-old Lambert Laclezio won last year as the first athlete to represent the island nation Mauritius at a World Championship when he competed in the vaulting competition at the 2014 WEG.

Against All Odds Award – This award acknowledges people who have pursued their equestrian ambitions despite physical issues or extremely difficult personal circumstances. Para-Equestrian dressage athlete Sydney Collier of the USA accepted this award last year with her service dog, Journey.

Best Groom Award – This award is for that important person who works behind the scenes and ensures the horses he or she looks after are given the best possible care. Eventing has been represented in this category for two years running. William Fox-Pitt’s groom Jackie Potts (GBR) was last year’s winner, and Ingrid Klimke’s yard manager Carmen Thiemann (GER) won in 2013.

FEI Solidarity Award – This award is for an individual or organization that has demonstrated skill, dedication and energy in expanding equestrian sport. The equine therapy center Equal Ark in Singapore received this honor last year.

Nominations close at midnight on August 28. Click here to nominate your equestrian champion.