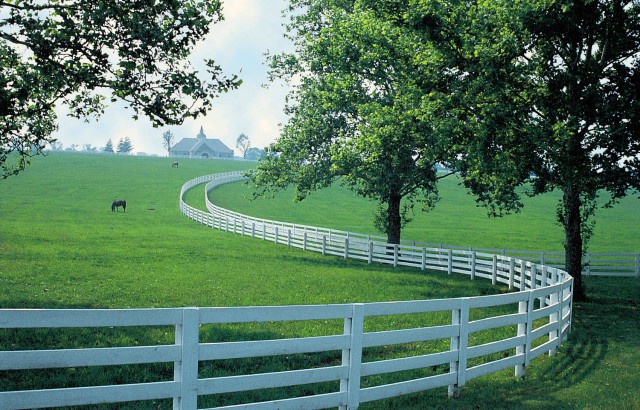 As you take I-75 exit 120 and begin the short drive down Iron Works Pike to the entrance of the Kentucky Horse Park, the highly visible white plank fencing has long been an invariable symbol that you have arrived in the Horse Capital of the World. That will soon change, as the Park is transitioning nearly 30 miles of fencing from white to black.

The iconic white fencing has been in place since the park opened in 1978, but it is expensive to maintain. Switching to black fencing will save an astounding estimated $50,000 annually in materials and labor costs that can be redirected to key operational needs that benefit the Park’s horses and guests.

Much of the fencing at the Park is already black, including the plank fence bordering the steeplechase track and other areas of the cross country course, and black fencing is not uncommon at other Lexington farms due to its lower maintenance costs.

The transition will be complete long before we all pile into Lexington for the 2016 Rolex Kentucky Three-Day Event. Pressure washing, scraping or replacing damaged boards and applying the new paint will begin very soon. Fences surrounding show rings, however, will remain white for visibility and safety purposes.

But the fencing is not what defines the Kentucky Horse Park – it’s the horses and the history that makes the Park so special to thousands of horse lovers around the world. That’s what keeps us coming back!