Kim Meier's eventing career spanned from 1969 to 2007, and from the 1980s on, she rode mostly homebreds. Early on in her career she rode with Denny Emerson and then mainly Ralph Hill and Donnan Sharp Jones. She made six Advanced horses, started all of them, broke five of them and bred four of them. She has shared her with us in the past, and now she returns to talk about Charisma. 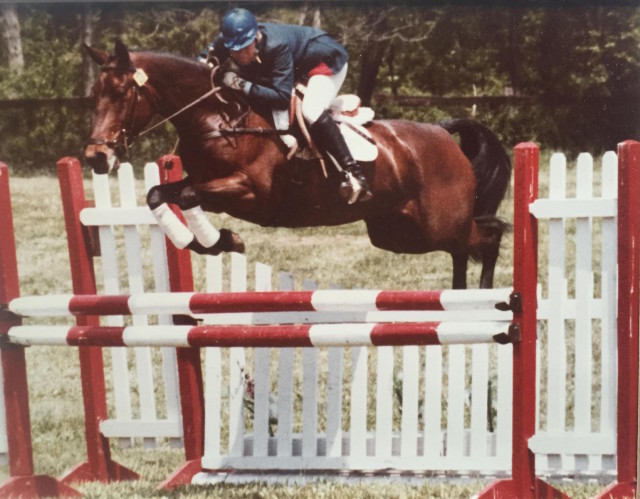 There were no windows in the bottom of the bank barn. The only light came from a row of yellowed light bulbs down the center aisle, and those were covered with hundreds of little brown spots, as if the flies had taken a census. There were 10 tie stalls on each wall. Here and there a low wall separated the horses, but mostly, it was fencing boards nailed to a beam or hung from the ceiling with baling string.

The old horse dealer backed out a skinny little mare. “Now I know she ain’t big even though she’s only 3, but you like ’em young and unbroken and she is that. She’s been stuck in here with strangles for a month. He led her out into the light of the open door, something she hadn’t seen in awhile as she rapidly blinked her large brown eyes. Nice eyes, I thought. Intelligent. She was barely 15 hands, I wanted 16 ideally, but those eyes … Something about them.

“And I can bring her back.” It was a statement.

“You can always bring them back.” He liked it when I brought them back. They were always fatter and wormed and better schooled.

It was done, the spare spot in my trailer had been filled, and the scrawny mare traveled home with the school horse I could put to use right away. On the way home I named her Charisma, because those big eyes screamed class beyond her non-impressive little body.

She was easy to break, afraid of nothing, least of all me. By summer she was ready to go in the school horse string, but I was the only one who taught off her. Most would think it was scary to put such a baby under campers, but I would rather have them nicely broken by me. I used her as lightly as I could and rode her myself when the campers went to lunch, to keep the schooling up.

By her 4-year-old year I’d figured out she was quite a good jumper and although I was obliged to keep her in the school, I found myself competing her on weekends. At that time I had a nice Preliminary horse named Moon Pilot. He had been a trade for a school horse. After a couple years of hard work we had made him into a Prelim horse and he would be taking me to the Junior National Championships at Radnor that fall.

I had a very disappointing Radnor, as poor Pilot irritated an old tendon injury shipping down and couldn’t complete more than the dressage. If fall was disappointing, then winter was dismal. Pilot colicked badly in January when colic surgery was very young and I was not very lucky.

For over a month it was all I could do just to feed the other horses and turn my head as I walked past his empty stall. But somehow during the March thaw the omnibus arrived and I looked around the barn and there was Charisma.

I called up Denny Emerson and said I had a horse to go Prelim on. Our first lesson commenced with her running around the ring like a sewing machine. He watched for all of three minutes and then, using every ounce of tact possible, asked, “Can she jump?”

At Hitching Post, I found myself standing in the lineup at the end of the day. Denny looked around and his eyes landed on me. “Did you win?” he asked in disbelief. I vigorously nodded my head with this stupid smile on my face. I had never won Preliminary before. Little Charisma had rewarded me for saving her out of that dealer’s barn two years ago.

But she developed an aversion to ditch and walls and left me in the toilet more than on the podium many, many times. Denny sat me down and said, “Look, she isn’t going to do it for you. I know you don’t have any money, but I don’t care if you beg, borrow or steal some, you need something the quality of Pilot.” So I chose to beg, from my grandmother, and for 10 times what I had ever spent before, I procured a lovely green off-track horse and named him Copilot.

But I refused to give up on Charisma.

A year after that he met me in the warm-up ring at Chesterlands, which had only Preliminary and Advanced. He shook his head and smiled. “I’m not even going to ask what division you’re in.”

Although she got me through my first Advanced, wouldn’t you know you don’t just get a competitive upper-level horse for $350. So I bred her.

She’s little so we went for something big, a local Trakehner, and she cloned herself in chestnut; I named that baby Chaos. Since that didn’t work so well, we had to go even bigger, Epic Win at over 17 hands, and he put 6 inches on Char; I named that one Chleptomanic.

Well then Bruce Davidson was riding two fancy Advanced horses by Babamist, and that meant I had to have one too. The only problem is that Babamist tended to put a bit of a, we’ll call it enthusiastic, spin on his babies; that might not have been the best gene pool for Char to go dipping in.

Regardless, that marriage produced a very fancy solid mare, Chamakazi, albeit she only made it to 15.2 hands. The last one was by a Thoroughbred named Lord Baltimore owned by one of my vets, and there was a rumor he produced some good jumpers. That time I finally got my colt, Chobalt.

My group of “Char babies” knew how to jump as a birthright. Chaos got her forever home in California after just a few runs at Preliminary. Meanwhile, having recently sold two good Prelim horses and not having much to compete, I began sneaking 3-year-old Chamikazi into a few Novices. She enjoyed competition, and I liked her very much.

I was planning on taking a little bit of the money from the sale of my two horses and getting something off the track to resell when my babies grew up, but I decided I’d rather take a little more stud fee than I usually spent and get another breeding to Babamist, this time to our big girl Chleptomaniac. This produced the most beautiful colt who, after much thought, I used one of my special saved names, Test Pilot, after Moon Pilot and Copilot.

As time went on, Chleptomaniac went Intermediate and then retired to be a broodmare. Chamikazi and Chobalt were going Advanced. At Fair Hill in 1996, both won their advanced divisions on the same day. If you congratulated me, my standard comment was “Thanks! I bred them both!” I was so proud of them.

Test Pilot had been so lovely that when it came time to geld him, I asked, “What if we kept him a stallion?” The answer was he would have to still be a good competition horse; he would have to be gentle to be around, as there were lots of kids running around the barn; and, of course, he would have to throw good babies. He made it to the Advanced level; my 7-year-old daughter could hold him; and his first foal, Test Run, turned out to be my four-star horse, placing 10th at Rolex Kentucky and completing Burghley.

I really just wanted to get another horse up to Prelim level. What I got was an introduction to Advanced; my first trip to Kentucky CCI3*; and another Preliminary, an Intermediate and two Advanced horses. Plus, Charisma became the great grandmother to my four-star horse. Not bad for $350.