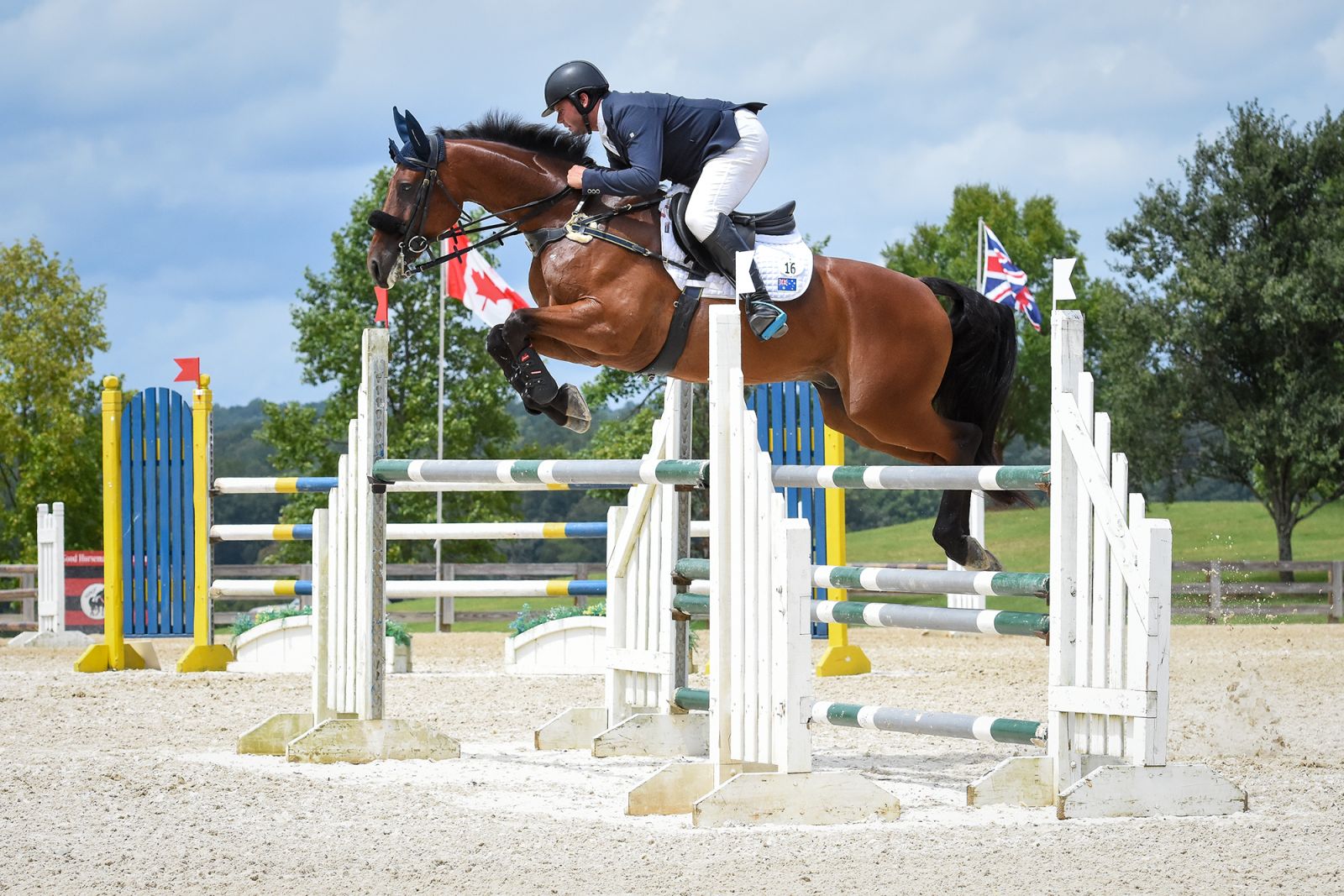 For most people, 2020 has been a dumpster fire of lost dreams, but this year has been a land of opportunity in Clayton Frederick’s eyes. In January, the Tokyo Olympic Games seemed out of reach for the silver medalist, but postponement was a chance for him to seriously throw his hat into the ring for team Australia. His frontrunner at the moment is FE Stormtrooper, an 11-year-old Hanoverian (Stakkato’s Highlight x  Levina, by Levisto) who currently tops the Chattahoochee Hills Advanced division.

“You get an extra year to prepare for an Olympic Games. That for me was an advantage because I was probably slightly behind the eight ball getting these horses and getting ready for Tokyo, but this year has ended up being an opportunity to consolidate, and I think we’ll actually be pretty ready next year,” Clayton said.

For “Stu,” who is owned by Diana Crawford and Kingfisher Park, this quieter year gave him a chance to get comfortable in his skin. Today’s performances showed that in illuminating color. On the flat, he was tied for third, and had a clear show jumping in the afternoon for a two-phase score of 30.7.

“He’s starting to get more established. It’s taken a while with him. He’s a very high strung horse, so he’s needed to settle into himself,” he said. The trick? Elbow grease and patience. “It’s just work. It just takes time. This is my third year riding him, but it just takes time with them. With him, he tries so hard, so if it’s not right or he feels like he’s under pressure, he gets worried. So you’ve got to take it really steady with him and build his confidence. I really feel that it’s taken me a while to build his confidence with me – he really trusts me now.”

“I think he’s a horse certainly for teams, and having this extra year … fingers crossed, touch wood – If he stays going the way he’s going and improving like he has, I would hope that he’s going to get me back into the team,” Clayton said.

Clayton is also eighth with another promising horse, FE Always In Time, a 9-year-old Trakehner owned by Clayton, Adele Siewert and Eckart Siewert, with one pole down for a score of 36.1. 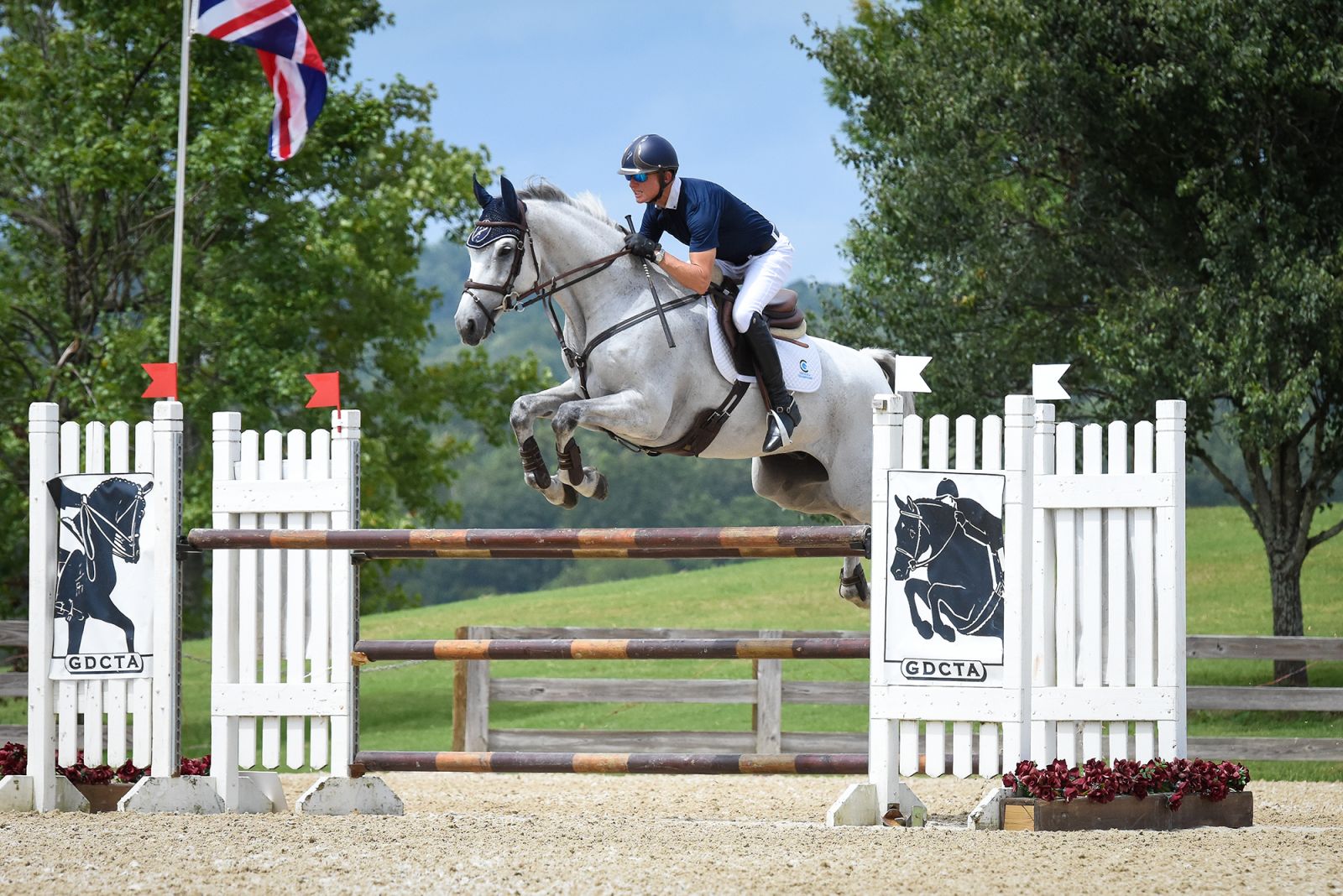 Riding for Beatrice Rey-Herme, Leslie Law moved into second place with QC First Class. The 9-year-old Oldenburg (Fuestenball OLD x Laguna, by Lortino) posted a 31.8 on the flat and added nothing to it over fences. He’s less than three seconds on the cross country course behind our division leaders.

Leslie is also fifth with Tre’ Brooks’ Voltaire de Tre, an 11-year-old Selle Francais (Gentleman IV x Jasmina du Fresne, by Socrate de Chivre) on a clear round and a score of 33.8 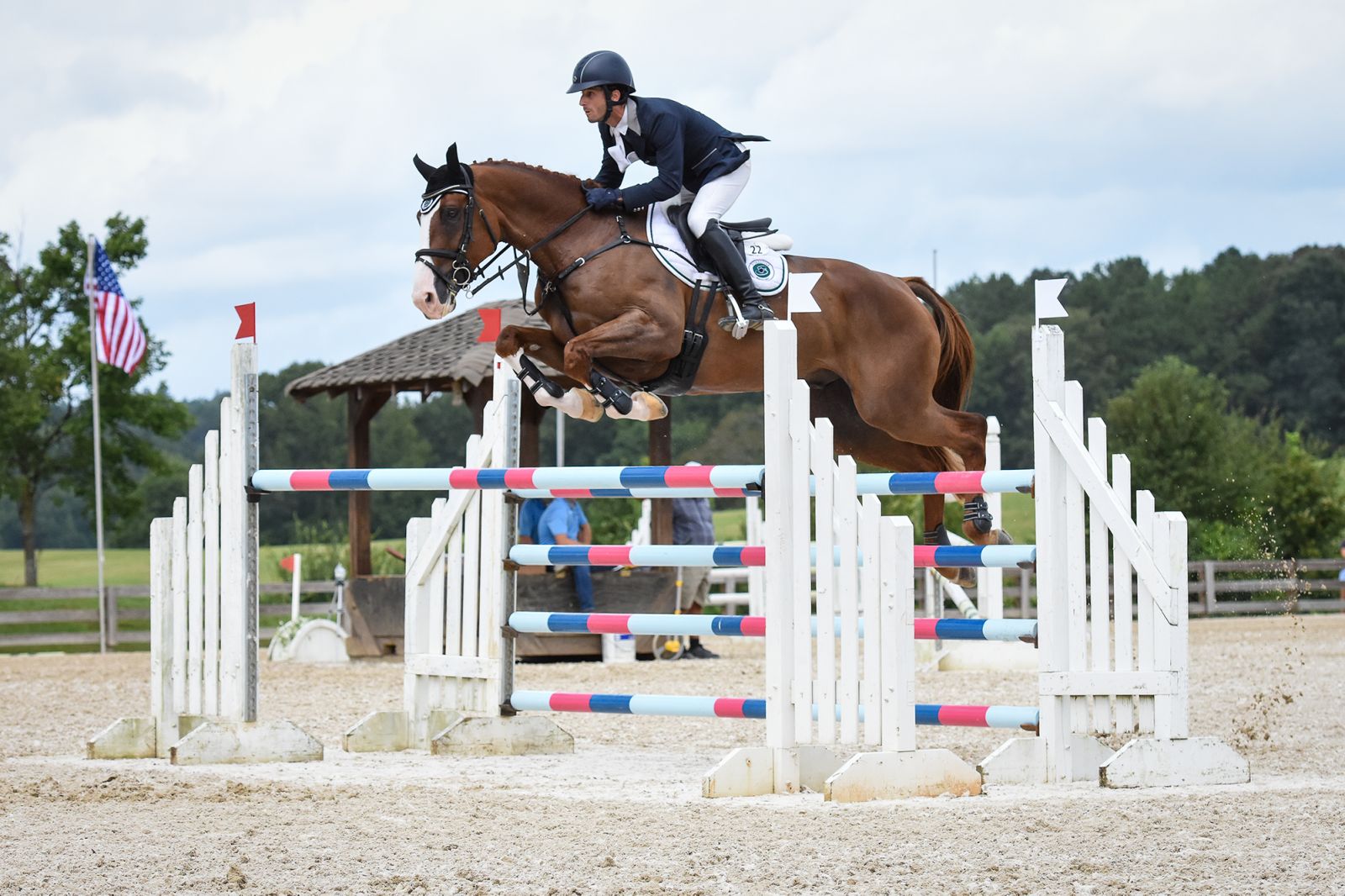 Zach Brandt and Direct Advance are third. This is the 9-year-old Irish Sport Horse’s (Night Cruise x Herbst Jennie B, by Concorde) debut at the level, and on the flat he laid down a 31.8 — forming a tie with Leslie Law and first class — but was one second too slow in the show jumping to drop into third on 32.2 penalty points. 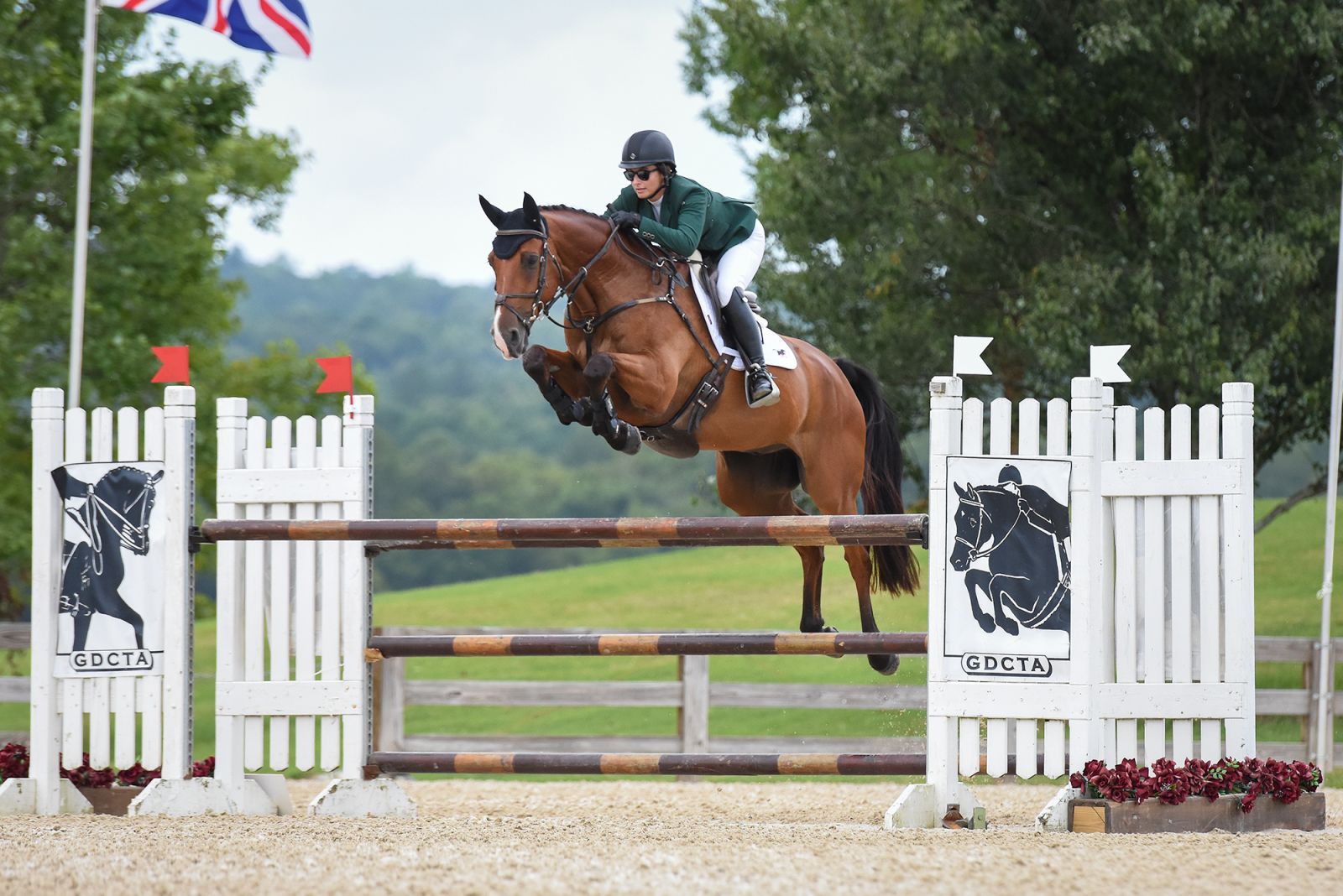 Rebecca Brown might be wishing she’d been just a tad faster over Chris Barnard’s show jumping course today. She and her own Dassett Choice had a class round, but 1.6 time penalties broke the tie they held with division leaders Clayton and Stu. Nevertheless, she and the 11-year-old Dutch Warmblood (Caricello x Vilja, by Hemmingway) still hold fourth place on a score of 32.3. 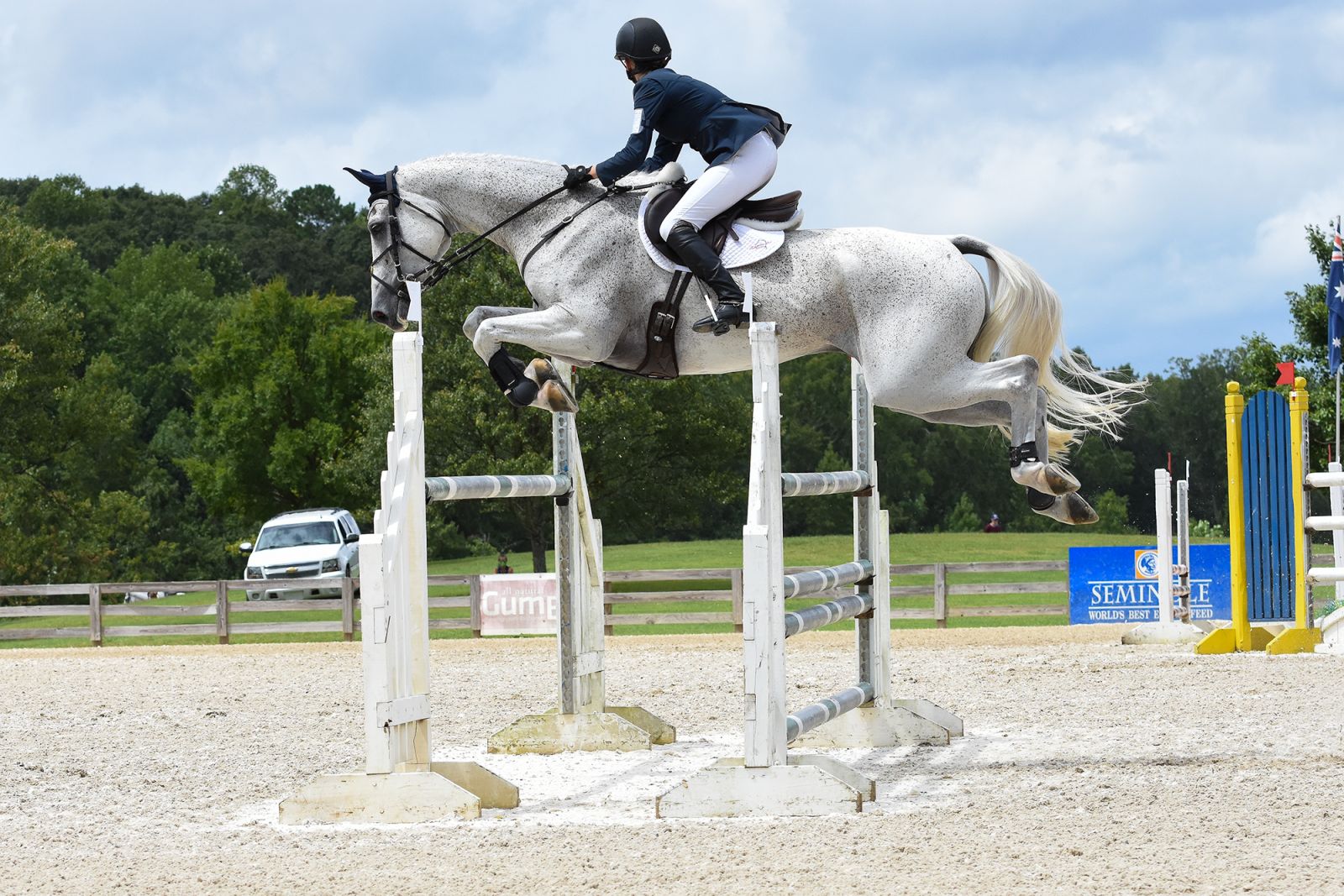 Ashlynn Meuchel and Emporium hold sixth overnight. The 11-year-old Dutch Warmblood (Cartano x Upana), owned by Ashlynn and Ashley Creek Stables, rode a clear round from 14th to their current position after a faultless show jumping effort in the pair’s second start at the level. 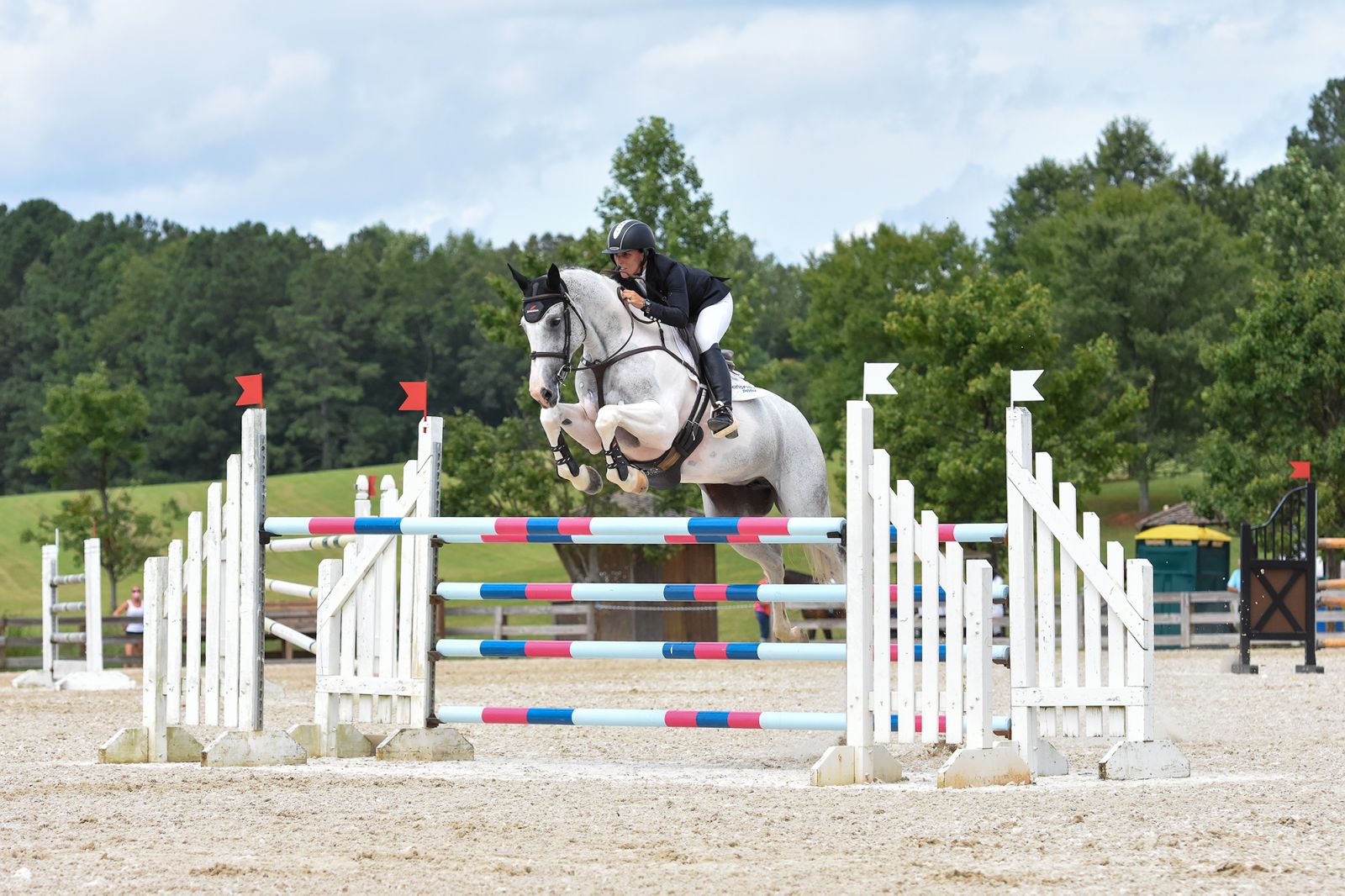 Jon Holling is ninth aboard a very promising ride, Dushi Terma. The 12-year-old KWPN (Valliant x Naterma, by Ammareto D I), who is owned by Jon, Constance Ann Holling and Team Rebecca saw one rail fall for a current score of 37. Alexandra Green Kerby and Fernhill Limited Edition round out the top ten on a score of 37.3.

Of the 30 starters, only 7 achieved rounds without poles or time over Chris Barnard’s track for a double clear jumping rate of 23.3%. In addition to those mentioned above Zoe Crawford and K.E.C. Zara were also among those who jumped clear today. 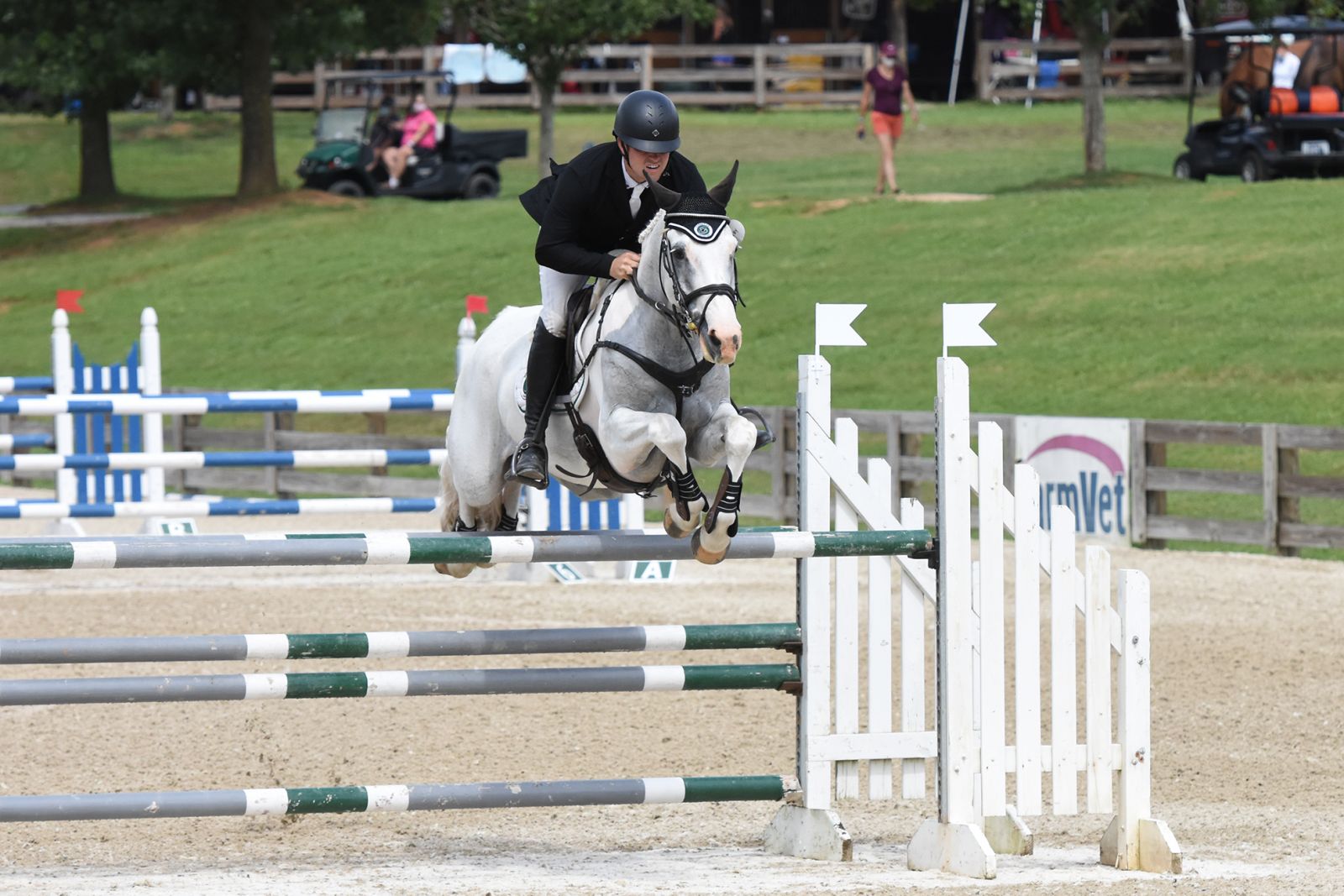 Alex O’Neal and Gayle Davis’ Pauldary’s Arctic Tiger stepped up to lead the CCI3*-S class. The 8-year-old Anglo European (Pauldary’s Funky Tiger x Pauldary’s Tigers Touch of Fro), a first-timer at this level, are sitting pretty on a 29.5 ahead of tomorrow’s cross country phase.

Alex is also third with Miss MoneyPenny V, who had two rails for a score of 28.9.

Tomorrow is cross country day! The Advanced division will kick things off at 9 a.m. over Hugh Lochore’s course, followed by the three-star will follow at 10:25 a.m. Stay tuned for more from Chatt Hills.