Recently, I finally got the chance to check “Denny Camp” off my bucket list. Denny Emerson needs no introduction. Any eventer who hasn’t heard of him either has been living under a rock for the past 40 years, or is unconscionably young, or some combination of both.

Since 2004, Denny and his wife May (herself an experienced rider with a good eye, and the consummate hostess) have hosted the twice-annual Tamarack Hill Farm Adult Camp (popularly referred to as “Denny Camp”), a five-day extravaganza of riding instruction, guest lectures, superb meals and excellent company.

The Emersons open up their farms (Tamarack has picturesque dual campuses in Strafford, Vermont, and Southern Pines, North Carolina) and homes to primarily amateur competitors from Beginner Novice through Preliminary. It’s a major logistical undertaking, and rumor has it, this 2016 spring camp in Southern Pines was the last of its kind.

This isn’t a travel guide review you’re looking at — it’s an epitaph. So I set out to capture and record the pearls of wisdom Denny and his team had to share at this, the last-ever Denny Camp. 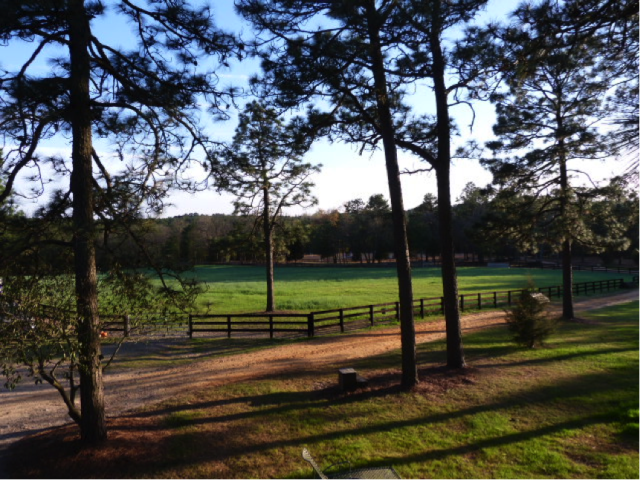 The view from Denny and May Emerson’s deck at Tamarack Hill Farm in Southern Pines, and the setting for “happy half-hour” and dinner at the end of every camp day.

Denny Emerson is the first to admit that just because he went to the Olympics in ‘76 doesn’t mean he necessarily had become what he would now consider to be a good rider by then. He claims that the fundamentals of good riding took him decades to understand and to master.

What sets him apart, even more than his achievements as a competitor, is his devotion to being a true student of equestrian sport — the art and the science of it. He has spent half a century pondering, experimenting, practicing, writing about and teaching all the intricacies of both his riding and that of others.

Consequently, anyone who rides with Denny gets not only his own perspective, but anecdotes from famous former USET coaches like Jack Le Goff and Bert De Nemethy (complete with convincing imitations of their accents); show jumpers like Rodney Jenkins, Bernie Traurig and Michael Matz; and eventing legends Bruce Davidson, Michael Plumb and countless others.

Denny routinely gives away all of his accumulated knowledge for free on his Tamarack Hill Farm Facebook page. One could probably compile a definitive textbook of riding just by downloading his various posts and organizing them by subject. Or you could just purchase the book he actually published, How Good Riders Get Good.

Denny Camp staff features, in addition to Denny and May, well-known and respected Area I Advanced eventer Sue Berrill, who artfully provided all of the dressage instruction, and Daryl Kinney. Daryl is essentially the Lauren Kieffer of Tamarack Hill Farm. She arrived straight out of college in 2007 for a stint as barn manager and there she remains – quietly and consistently honing her skills as competitor, trainer and instructor.

Daryl keeps a relatively low profile in the event world yet has earned respect throughout Area I and beyond for patiently and skillfully moving a talented string of Tamarack horses up the levels. Denny’s horses all strike me as being impeccably bred, yet there seem to be no easy rides among them. Daryl has mastered them all, with a tenacious, unfailingly positive attitude and a correct, stable lower leg of steel.

In this video, Daryl Kinney demonstrates the elusive concept of converting “forward-and-down energy” to “under and up energy,” one of several keys to an accurate showjumping round.

Overall, Denny Camp probably has more in common with military basic training than a typical dressage or jumping clinic. I’ve surely attended as many lessons, clinics and eventing camps as anyone out there, but, even in Pony Club, I’ve never seen the fundamentals broken down quite so explicitly or in such detail, or drilled with such discipline.

From seeing a distance, to putting a horse on the bit, to achieving The Right Canter or gallop to navigate any and every jumping question (and all the space between), Team Tamarack demystified the sport’s most confounding concepts.

Seeing a distance and ‘The Right Canter’

In case you were wondering, purportedly the average distance away from the base of a fence from which the average horse leaves the ground to successfully jump over said fence is six feet. So, presumably, if one were to go through all of one’s courses before jumping and draw or otherwise superimpose a line six feet out from the base of each fence, and then take off from that precise point every time, one would never “miss” a distance.

However, this is impractical. Moreover, even when one of the many people who have tried in vain over the years to teach me to ride have actually drawn me a stupid line like that in the sand before the fence, frequently I still miss. So, despite now knowing the answer to the age-old question “where is my distance?” how does one learn to “see” one’s distance to the optimal take-off spot while in the saddle approaching the fence, at speed, constant bearing-decreasing range? 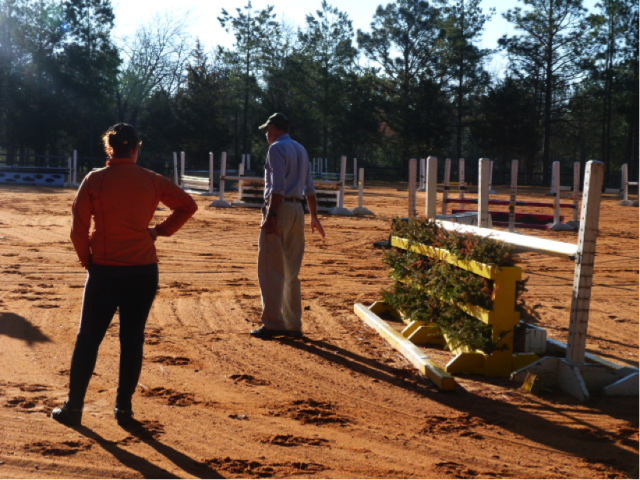 Denny Emerson demonstrates take-off spots — this one is too close, fewer than six feet from the jump. If Denny were a horse he would be “chipping in” and have more difficulty clearing the fence.

Team Tamarack recommends the following method. Their method initially seemed too simple to effectively master what I have come to regard as so complicated a concept. However, at this point I am willing to try anything so I gave it a go.

First, determine whether you have The Right Canter for jumping by counting aloud each canter stride in a rhythm, “one-two, one-two, one-two,” etc. Do this often enough to get a sense of what the rhythm of a canter with sufficient balance and energy to jump proficiently from sounds like.

You can get a sense of the “right” rhythm by having a professional tell you when you have a good canter, or by watching the experts on video and counting the strides of their canter, or by figuring it out for yourself through trial and error. Soon, you develop a sense of what the right counter sounds like when counted aloud.

Then, count the canter strides you have at any given moment, and compare the cadence of that count to what you remember as that of The Right Canter. Too slow? Add leg. Too fast? Half-halt, balance and try to compress and elevate the stride into the right rhythm.

I tend to think I have a faster (which is to say, more energetic) canter stride than I do. Denny politely described my typical canter as “languid.” So more often than not I need to put leg on and, in a nutshell, go faster. BUT. When I do, my horse easily transitions into fast and flat. From there, we increasingly pick up speed and start to rush. When that happens, upon counting the rhythm it sounds too fast.

Denny relates that Jack Le Goff described The Right Canter as one that combines impulsion (energy) and balance, in equal measure. Achieving either balance or engagement alone is not that hard. Combining them both together simultaneously is very difficult.

“Engagement” is the act of the horse stepping under itself with the outside hind foot, flexing, and “lifting” or pushing up off of it. Engagement is the key to a balanced, energetic, bouncy-feeling canter. So the goal is to achieve engagement while keeping the horse moving forward energetically at what has come to sound (and feel) like the right rhythm.

Once in The Right Canter, look for the spot that looks to you to be three rhythmic canter strides away from the take-off spot. Once you reach it, shift from counting your canter strides in a repeating cadence of “one-two, one-two” to counting your strides down from where you think is three strides out. So, “three, two, one” [insert jump here].

Repeat this exercise several hundred thousand times. You probably will find that you “guess” correctly more of the time, you develop a fairly reliable sense of where three strides out from the fence is, and, most importantly, “miss” less often. To save wear-and-tear on the horse, you can do this exercise without jumping anything. Instead, count down to a pole on the ground, a line in the sand, a traffic cone, a jump standard, a shrub alongside the arena or along the trail, or any other stationary object. 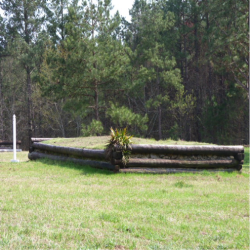 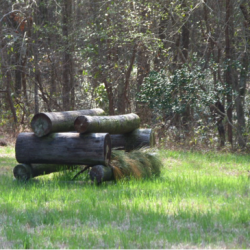 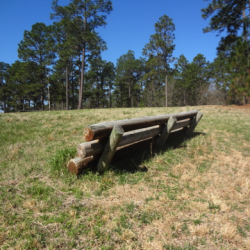 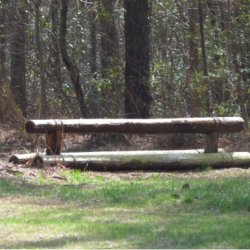 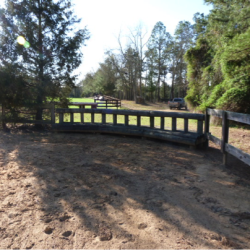 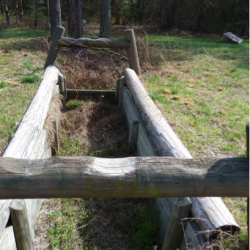 Feet forward and heels down

Tamarack Hill Farm South sports a mind-blowing array of cross country obstacles in terms of both number and diversity. The cross country portion of Denny Camp spanned a healthy variety of obstacles and terrain.

The key to not only surviving but flourishing cross country is, once again, position. Specifically, keeping feet forward, heels down, toes out. This is not a new idea, and something I had already learned. Many, many times. In theory. But it is surprising how fast the fundamentals slip away without regular reinforcement, particularly under the stress of an event, or the scrutiny of a clinic.

What I thought of as feet forward and heels down wasn’t nearly enough to satisfy Denny –—nor stable enough to enable me to half-halt and balance my horse once he shifts gears into running fast and flat. 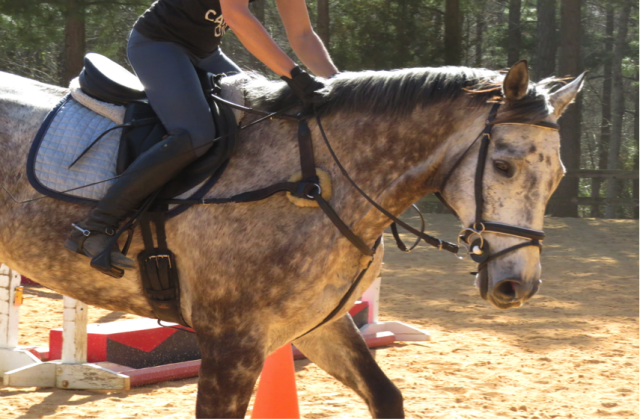 See? This is me. Leg too far back, not balanced, not stable, rider susceptible to being “pulled out of the tack.” Photo courtesy of May Emerson — and thanks bunches for capturing this particular “teaching” moment … 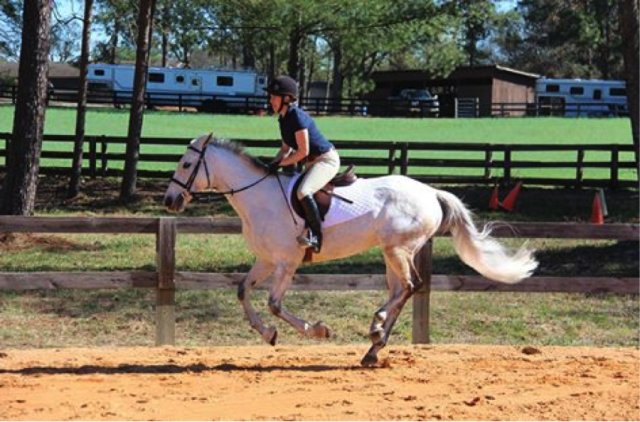 Much better. (This is not me). Heel down, foot forward, balanced over her stable lower leg. Photo courtesy of May Emerson.

The heel/spur of the rider needs to impact the horse’s side at the outermost point of its barrel, just behind the girth. Bruce Davidson allegedly refers to this spot as “the control button.” When putting “leg on,” the heel or spur needs to go here. A rider gripping with the knee is rendered anatomically unable to effectively put “leg on,” since the interior side of the knee, and the back of the heel, can’t both be on at the same time.

This is also the reason for riding with stirrups as short as possible cross country. It is a matter of geometry. Short stirrups help put the heel at the apex of the horse’s barrel, where it achieves the greatest effect.

The most striking quality about Denny Emerson is the depth of his emotional investment in the success of his students, whether he has known them for a few days or many years. He is exacting, and at times (in keeping with his reputation) curmudgeonly. He is the first to admit this.

“Why am I growling at you like a Dutch Uncle?” he asks rhetorically. “Because it’s safety. Your safety is at risk if you don’t get this right.” I think that at times Denny became even more frustrated with my bad riding than I did, and that’s saying something.

But the converse also is true, and he is equally effusive with his praise and excitement when the light bulb finally goes on and someone visibly puts into practice what he has been telling them. I have never encountered an instructor who experiences such genuine, personal and obvious delight in his students’ success.