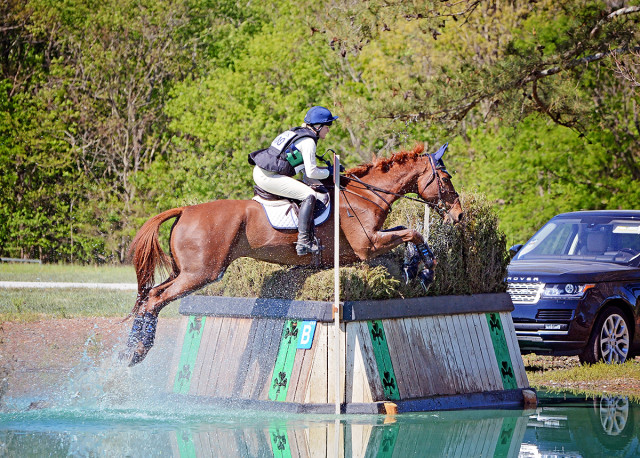 Philippa Humphreys and Sir Donovan in their final Rolex prep run at the Fork. Photo by Jenni Autry.

Philippa Humphreys has withdrawn Sir Donovan from Rolex Kentucky after the 14-year-old Irish Sport Horse was diagnosed with a lung infection following a successful final prep run in the CIC3* at The Fork Horse Trials. She pulled “Donald” up about halfway around the cross country course as planned, but several days later they noticed he had become ill.

“I’m absolutely gutted to report on Tuesday Donald became sick,” Philippa said. “We have discovered he has a lung infection. Fortunately he was in very close proximity to Dr. Kevin Keane’s sports medicine practice, and they were able to attend to his emergency immediately. He remains in a stable condition under the wonderful care of Dr. Amy Johnson at New Bolton in Pennsylvania, where he is expected to make a full recovery.”

Philippa and “Donald” partnered in 2014, finishing in 23rd place at the Dutta Corp Fair Hill International CCI3* the same year. They completed the Pine Top CIC3* and Carolina International CIC3* this winter and were looking towards Philippa’s first four-star appearance at Rolex. Donald competed at Rolex three times in his career with former rider Katie Ruppel, finishing 15th in 2013.

“Donald’s health and well being will always be my number one priority,” Philippa said. “I have so much appreciation for Donald. He’s a horse of a lifetime.”

We’re sending well wishes to Donald as he recovers and hope to see the two of them compete in Kentucky in the future.

Click here to see the entry list for Rolex. Six horses have now been withdrawn since the draw order was released: Wesko, Ballylaffin Bracken, Catalina, High Times, The Dark Mark and Sir Donovan.