It’s a busy summer weekend for eventers and we’ve got another U.S. rider to cheer on (along with an absolutely star-studded international entry list) at Arville’s CCIO4*-S Nations Cup leg: Tamie Smith, who’s got Tokyo reserve Mai Baum, owned by the Ahearn family, as well as Ruth Bley’s Danito and Julianne Guariglia’s Solaguayre California on a European tour that kicks off this weekend.

This will be more of a set-up event/test run for Tamie’s trio, who are also aimed at Aachen and/or Boekelo this fall. Mai Baum was named to the Aachen Nations Cup team and today it was announced that Danito would be joining the squad for Boekelo.

After the first day of dressage in the stacked CCIO4*-S, Danito will be the top-placed Smith ride, earning a score of 29.4 for fifth place, followed very closely by Mai Baum, who scored a 29.9 for early sixth place. The judging panel for this division consists of Nice Attolico Guglielmi at C and Nicola Nicholson at E.

“Both horses were super!” Tamie commented. “The ‘black stallion’ was a bit fresh, but everything else was spot on. Danito had a couple mistakes, but I was very happy with both of them.”

Notably back on top of the leaderboard, for now at least, is German stalwart Ingrid Klimke, who earned a 23.9 with SAP Hale Bob OLD to take the day one lead. Ingrid had a nasty fall earlier this season that would see her sidelined from the Tokyo Olympics, and despite the severity of the injuries she’s determined to come back for a bid at the upcoming FEI European Eventing Championships in Switzerland later this month.

“My young mare Cascamara and I were on the road in the CCI3* in Baborowko and fell together on jump four,” Ingrid said in an interview with St. Georg [this quote has been translated from German, so please forgive any translation errors]. “She rolled over me and really caught me. My entire collarbone and sternum were broken. The sternum was actually no problem. The bigger problem was the collarbone. Because this was once completely blown up inwards and thus pressed me extremely on the most important areas of the chest. In addition, I had some hematomas, so that swallowing, breathing, talking was really only very difficult for me. So the first two weeks I was really tied to my bed. It didn’t work at all.”

As most eventers do, Ingrid was quick to begin ramping up her recovery, though she says she sat on her old friend “Bobby” first as he is the horse she feels the safest on. Thanks to the efforts of her team, including stable manager Carmen Thiemann, former apprentice Valerie Kampe, her daughter, Greta, and the other interns on the farm, the horses were all kept in work and fit, making a return to competition more seamless.

Notable among the entries this week also include Michael Jung with Kilcandra Ocean Power and fischerWild Wave, Anna Siemer and FRH Butts Avondale, Christoph Wahler and Cartajan S, and many others fresh off the Tokyo Olympics and beyond. Unfortunately, we’ve not been able to locate a live stream for this event – if we do come across one, we’ll update our posts accordingly.

The cross country course this weekend is designed by Rüdiger Schwarz and the show jumping designer is Eugène Mathy. We’ll be back tomorrow with another wrap-up from dressage at Arville. 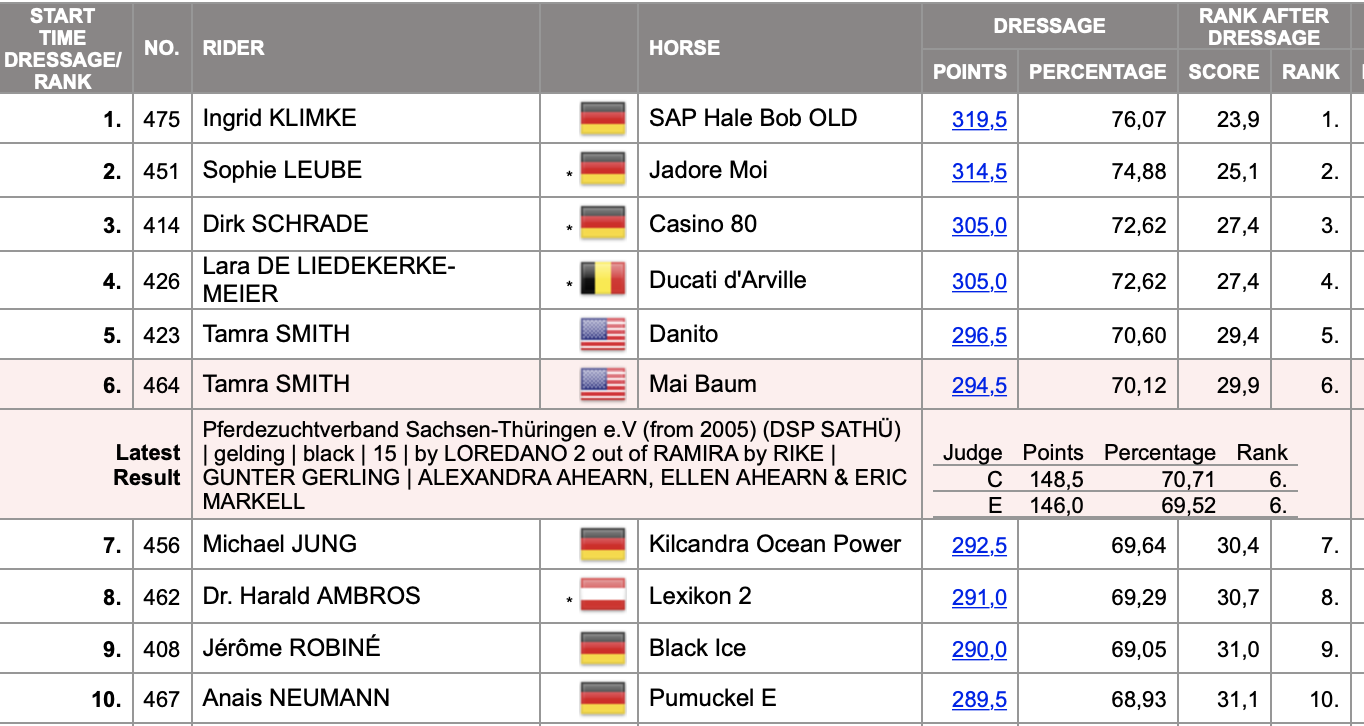