Last year, loyal EN reader and 2011 Blogger Contest contestant Chesna Klimek kindly sent us a write up and photo gallery of the brand new Advanced course at Aspen Farms. Chesna has continued to keep us up to date on eventing in the great Northwest, and we appreciate it!  Today, she’s back to share a great story about cancer awareness supported at Aspen Farm’s upcoming September horse trial. Thanks so much to Chesna for writing, and thank you for reading. 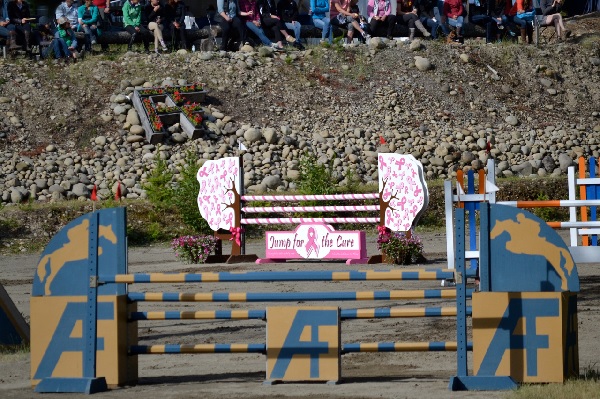 Area VII eventer Desiree Bruce has done more than tackle cross-country courses in the Pacific Northwest; she has battled and beat breast cancer twice. Now she’s coordinating a project to spread awareness and raise funds for cancer survivors, and she’s enlisting the help of the local eventing community. 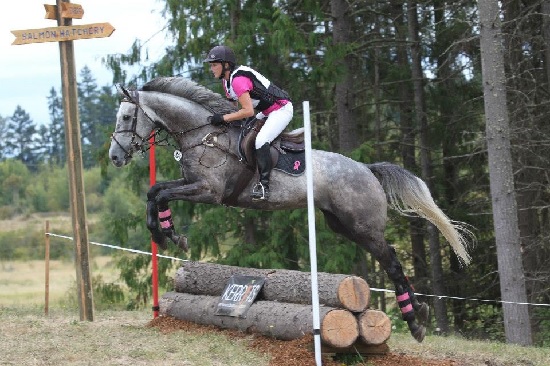 Reflecting back on her cancer diagnosis, Desiree says, “The second most frightening thing after being told you have cancer, is thinking how in the world am I going to pay for all this?! The first is thinking you’re about to die.” Like many eventers, Desiree is strong-willed by nature. “I never asked for any help from anyone, I was way too stubborn and felt like it was my responsibility to take care of all my expenses.” She was amazed by how many folks stepped forward to support her during her recovery, organizing fundraisers and offering to help. It’s what inspired her to give back.

In the fall of 2012 Desiree reached out to Becky Mathews of Jumps by River. Desiree’s idea was to build two cancer awareness jumps using donated funds: one to be used for competition at Aspen Farms Horse Trials in Yelm, WA, and a skinny chevron to be raffled to raise funds for The Seattle Cancer Care Alliance. Becky was instantly enthusiastic about the project.

“It’s been a really personal journey for me” says Becky. “As we were building this jump, Area VII lost eventer Sheryl Hansen to cancer. I lost my mother to cancer years ago. And of course, Gail Elliott. And the more I talked with other eventers, the more I was moved because there are so many of us with personal stories about how cancer has touched us. Our eventing community has plenty of cancer survivors, and many folks have lost loved ones as well.”

Though colored pink, the jump is not specific to breast cancer. It’s meant to recognize anyone who has battled any type of cancer. A closer look at the standard wings reveals the names of cancer survivors given by friends of the riding community. 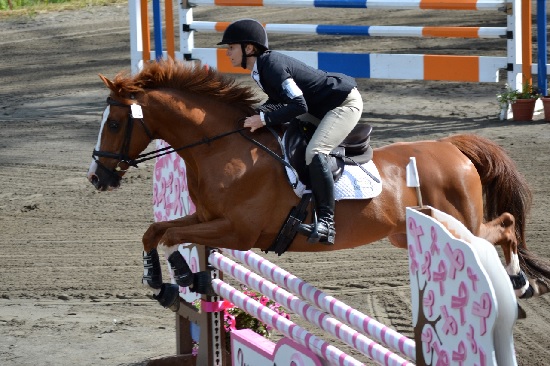 The Jump for the Cure fence wings are adorned with names of people affected by cancer.

The full-size jump debuted at the June 2013 Aspen Farms Horse Trials. Even on a course known for bright, colorful show jumps, the Jump for the Cure fence made a statement. Not only did it catch the attention of competitors and spectators; the horses noticed too. 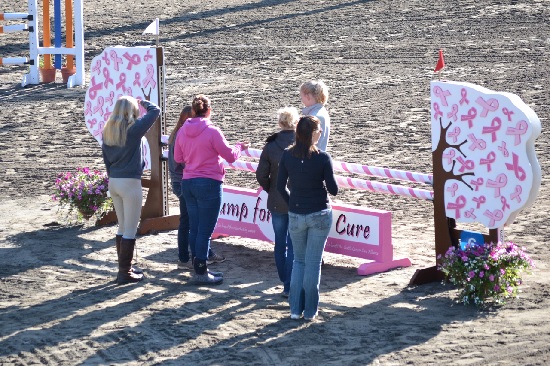 Jonathan Elliott, owner of Aspen Farms and organizer of the horse trials, lost his mother Gail Elliott to cancer in 2011. Gail was a big supporter of Aspen Farms and an integral force at the horse trials, responsible for organizing the shows’ many volunteers. After the June Horse Trials, Jonathan described the Jump for the Cure fence as “a great cause, and a good addition to the course.” The fence will be featured on course once more at this weekend’s September Aspen Farms Horse Trials, which will host Area VII Championships and the Pro Tour and Adequan Gold Cup series in the Tin Men Supply Advanced division. 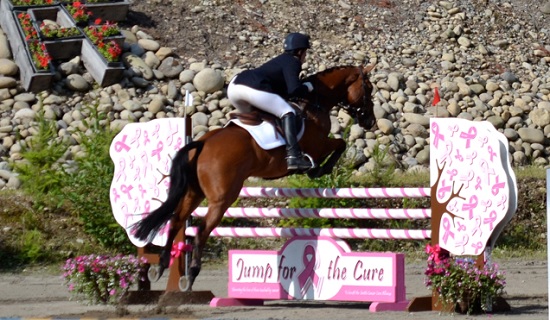 For Desiree, the Jump for the Cure project has showcased how supportive the local eventing community is and more. “This jump means so much to me in so many ways; it really represents ‘the fight’ and I’ve been so honored to be a part of its creation.”

The chevron jump will be raffled Saturday night, September 7, at the September Aspen Farms Horse Trials. Raffle tickets cost $10. Proceeds from the fundraiser and raffle will be donated to The Seattle Cancer Care Alliance, an organization local to the Pacific Northwest that helps people with cancer cover their expenses. Those interested in donating or signing up for the raffle can do so in person at the event, or online here: https://fundrazr.com/campaigns/7RPlf The winner of the jump will be responsible for arranging transport. 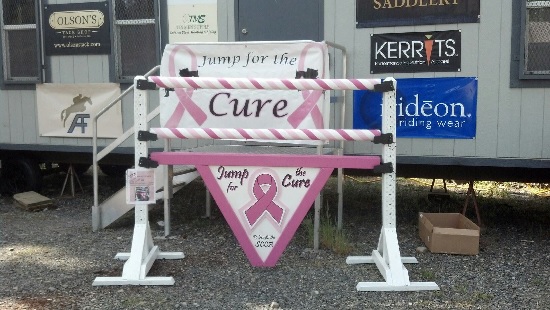 This chevron fence is being raffled on September 7, 2013 to raise funds to help cancer survivors.

The full-size competition fence used at both of this year’s Aspen Farms Horse Trials will be donated to the nonprofit Washington State Horse Park after next weekend. The jump will serve as a visual reminder to Northwest equestrians, not just eventers, of the impact cancer has in the local riding community.

This year in Area VII, the Jump for the Cure fence isn’t the only effort made by eventers to support the community of people affected by cancer. Rebecca Farm announced this week that they raised over $67,000 in donations to fight breast cancer, thanks to the Halt Cancer at X campaign at the horse trials this past July.

Causes like these highlight the difference that the eventing community can, and does, make. Go Eventing, and go Jump for the Cure! 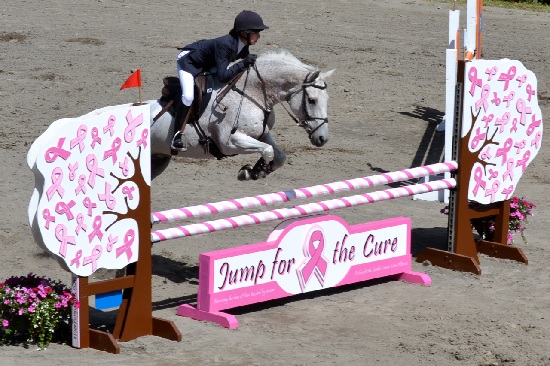