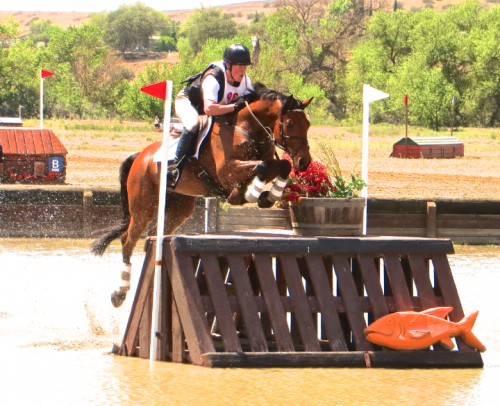 Farriers Jon and Dawn Dofelmier found Doesn’t Play Fair, a then 5-year-old Holsteiner gelding, while shoeing horses at Half Trak Farm in Stanwood, Wash. Dawn thought he would make a good novice horse for her, so she and Jon bought him and turned him over to Maya Black for training.

“Jon and Dawn Dofelmier have shod my horses for eight years, and I’ve started some of their other horses in the past,” Maya said. “I took him out at beginner novice and a few novices. After he’d done about six events, it looked like he was enjoying himself, and the Jon and Dawn Dofelmier were enjoying watching him as owners, which was something they’d never experienced before. So they decided to let me keep the ride.”

Now 8, “Cody,” who was bred by Half Trak Farm and is sired by Camiros out of a Coriander mare, has enjoyed a very successful eventing career with Maya. They were named to the 2012 USEF Developing Riders List last year and are preparing to tackle their first two-star this fall.

“The dressage comes fairly easily to him, but it’s a challenge in that he’s quite small at 15.3 hands,” Maya said. “He does have good medium paces, so it’s a matter of getting him out of his pony trot and making him look bigger than he actually is. Of all the horses I’ve brought along, he’s definitely been the most consistent. He really tries in the dressage, even if he’s a little spooky. I can really count on him to know that he’ll put in a decent test.” 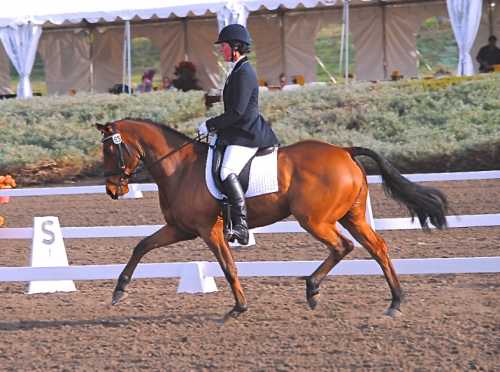 Even though Cody is notoriously spooky, he’s incredible game on cross country and hasn’t recorded a single cross-country jumping penalty in his entire career, which Maya attributes in part to the fact that she’s brought him along very slowly through the levels. Aside from one wonky spook on a novice course at Aspen Farm when Cody took a distinct disliking to some rock formations — leaving Maya to finish the course with one stirrup and a very crooked saddle — he knows his job and looks for the flags.

“He’s pretty adjustable and has a big stride for his size,” Maya said. “He covers the distances in the combinations well. As a tall person, I have to figure out how to ride him to the best of my ability to get the most out of his scope and jump.”

Unfortunately, Cody’s spookiness rears its ugly head in the show jumping, and Maya has been diligently working to help him cope and move past his fears. “He doesn’t like going between things or next to things, so that’s where I’m working the most to get him rideable.”

Cody eats his meals off barrels after he decided those were terrifying, and Maya jokes that her arena looks like a junk yard because it’s covered in tarps and an assortment of random objects. “To be honest, I haven’t seen a lot of progress,” Maya said. “At this point, I’ll continue to work with desensitizing him, but it’s really a matter of figuring out how to ride him the way he is.”

Next week on EN’s Got Talent: We’ll learn more about Cody’s quirky personality, including how Maya gets creative when sorting out stabling at events, as he hates being stalled next to other horses. “With all horses, it’s a little bit of a compromise,” Maya said.

“I’ve made a compromise that he has been really good when I take him to shows, and whenever I’ve asked him, he’s always been there for me and put his best effort in. So I can forgive the little quirks. It’s not necessarily worth dwelling on. You have to see the big picture.” Well said, Maya! We’ll also learn the reason why the Dofelmiers decided to use Doesn’t Play Fair as Cody’s show name. Go Pacific Northwest Eventing!