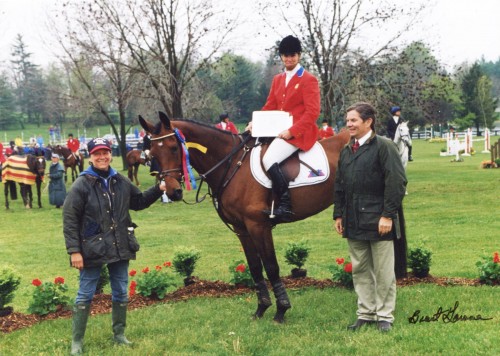 When Joan Goswell realized she needed a horse for her newly discovered sport of eventing, she surely was not expecting to buy an Olympic caliber competitor. However, when she saw the skinny bay gelding in a dark stall, she fell in love with his intelligent eye and thought she might be able to make him into into a nice partner.

Standing at only 15.3 hands, Worth The Trust, known as “Trusty,” had not been a very successful racehorse. He raced for three years at Mountaineer Park in West Virginia running in claiming races and only winning a single race, with total earnings of $3,838. Foaled in 1985 in Lexington, Ky., Trust was by Wind and Wuthering, a champion 2-year-old in England in 1981, and out of Stop Over Station, by Stage Door Johnny, a Preakness winner. His royal bloodlines did nothing to help his racing career, and so he found himself at age 5 in search of a new job.

Joan started Trusty very slowly, building his weight and muscle along with their partnership by going on long hacks together over the Pennsylvania countryside. They began working on some dressage, which Trusty easily adapted to due to his natural good movement and athleticism. Joan was very careful to start him very slowly and build a good foundation of basics before anything else. “I decided to take a very long time with him in the beginning, because I think it really pays off in the end,” Joan said. “We didn’t do an event until the fall of 1992, where we competed at our first Novice together.” 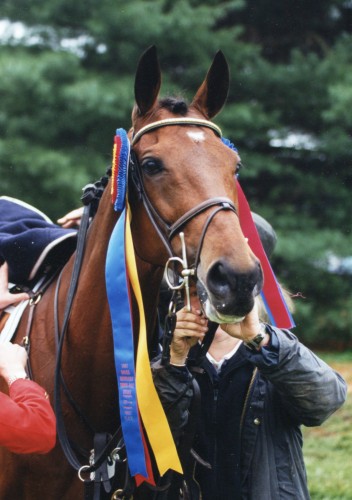 “Trusty always placed in the ribbons, and when I bumped him up to Training level, he continued to do so,” Joan said. “He jumped with his knees up to his chin!” In 1993, just as Trusty was about to move up to Preliminary, the two participated in a clinic with Karen O’Connor. Karen was quite taken with the small bay gelding, and approached Joan about purchasing him. “She asked to buy him, and I said ‘No, I really like him, I don’t want to sell him,” Joan said. “But then she asked if she could ride him anyway, and I thought, ‘Well, let’s give this a try.’”

Karen was based in England at that time, so Trusty went across the pond to compete at Preliminary and Intermediate, placing in the ribbons every time and even winning a horse trials at Burnham Beeches. They returned to the U.S. in the fall of 1994, and Karen received special permission from the USEF to run Trusty at Fair Hill CCI3* as his very first competition at the Advanced level. All three-days were long format at that time, with roads and tracks and steeplechase in addition to a mandatory weight of 165 pounds per horse. Trusty placed seventh that year at Fair Hill CCI3*. 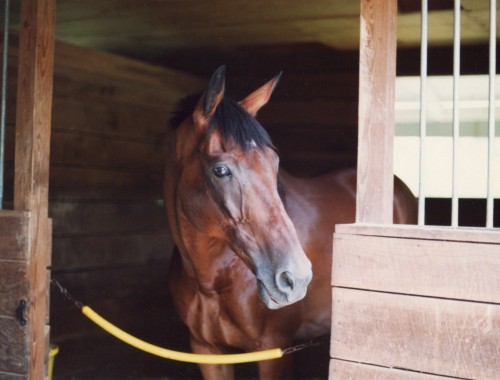 Trusty retired at Joan's farm in Pennsylvania at age 28. Photo by Joan Goswell.

“When Trusty went double clean in show jumping that day, and I realized that my horse had just won Rolex, it was a really surreal experience,” Joan said. “Here was my first experience in ownership of a top-level horse, and it was so successful! I was so lucky.  And to have Karen as my rider and trainer was incredible. There was no other rider who could have done those things with Trusty. She was, and still is, amazing,” Joan said.

Trusty went back to Rolex in 1998, this time for the inaugural CCI4*. Karen had four horses in the competition, and Trusty was her last mount. Unfortunately, after a great dressage test, the pair fell at the Jenny Lane Crossing, and Trusty badly injured his knees. He recovered and returned to the Advanced level, even competing at Fair Hill in the CCI3* again. It was there, for the first time in his career, that he had a cross country disobedience. Joan started to think that his knee injuries and old racehorse wear and tear were catching up to him. He was retired the next spring and returned to Joan’s farm in 1999.

Trusty went on to become Joan’s hacking partner and educated her, as well as numerous Pony Clubbers and adult riders, on the finer points of jumping and dressage at the lower levels. He took a liking to fox hunting, and Joan whipped in with him for several years despite his incurable fear of cattle. He was finally fully retired in the spring of 2009 at the age of 24 and now lives a life of luxury at home on the farm. He is a grand old gentleman and the epitome of a Thoroughbred legend.