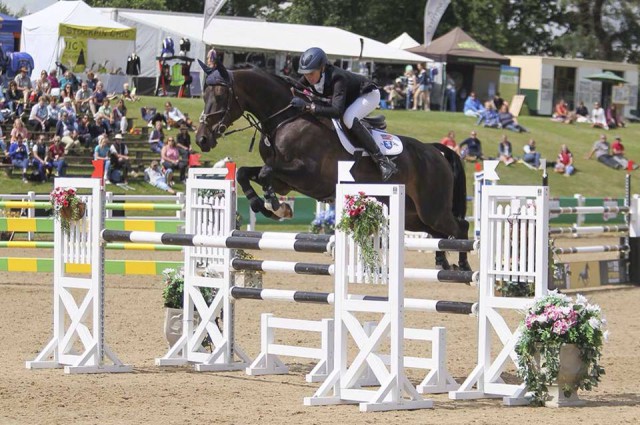 Chris Burton won the CIC3* at Hartpury International for the third time in a row yesterday, coming home double clear on cross country to finish on his dressage score of 44.2 for the win. This is Graf Liberty’s first win at this level, and Chris has also been named to Australia’s WEG squad as a reserve with this horse. His short-listed horse for the Games is TS Jamaimo, but certainly Graf Liberty will be a worthwhile option should the call up become necessary.

Chris also followed up his big CIC3* win with first place in the CCI* this morning. Chris and Santano II finished on their dressage score to win the division ahead of Lucy Jackson and Corazon.

Following close behind Chris, husband and wife duo Tim and Jonelle Price picked up second and third place aboard Wesko and Classic Moet. Tim is headed to WEG next representing New Zealand with Wesko, and he will be thrilled with the weekend’s result as a final ramp up to Normandy. Jonelle and Classic Moet were also named as reserves for New Zealand.

William Fox-Pitt withdrew Parklane Hawk, who led going into cross country, withdrew prior to the final phase. William did pick up fourth place with Avoca Alibi, who looks to be returning to the Advanced level after competing Intermediate over the last two seasons.

U.S. pair Liz Halliday-Sharp and Fernhill By Night turned in a clear cross country round, accumulating 11.2 time to finish on a final score of 58.3 for 13th place overall. Liz has had some tough breaks recently, but a top 15 finish in a huge and difficult division definitely made Liz’s day.

Canadian rider Kathryn Robinson and Let It Bee also had a great weekend, adding one rail in show jumping and a few time to finish in 10th place overall. Peter Barry and Kilrodan Abbott picked up a 20 on cross country and finished in 58th on the weekend.

Many thanks to YouTube’s harveywetdog for this great video of the Magic Pool water complex on the CIC3* cross country course: