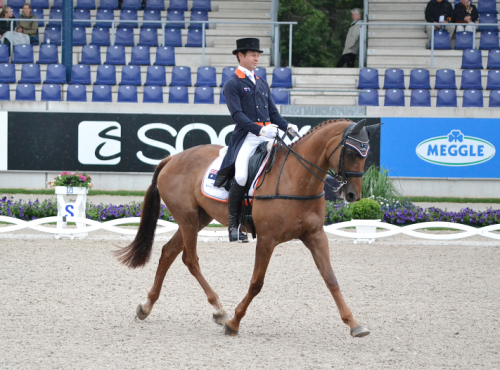 Chris Burton and Holstein Park Leilani are in second place on a 35.6.

We finally have a little variety in the top three at Aachen, as Australia’s Chris Burton and Holstein Park Leilani scored 35.6 to move into second place and break up the German party going on at the top of the leader board. This mare is consistently very good in the dressage, and she led after the first day of dressage at Badminton this year. Sara Algottson-Ostholt and Reality 39, a Hanoverian mare, moved into third place on a 37.4 and put in some of the best trot work we’ve seen so far today. They were neck and neck with the leader Andreas Ostholt and So Is Et until the canter work, where they started losing some marks. But this mare is 9 years old and just coming into her own — definitely one to watch for the future. And if you’ll indulge me for just a moment while I get back up on my girl power soapbox, I’d just like to point out that there are three mares in the top five at Aachen so far. Go mares! 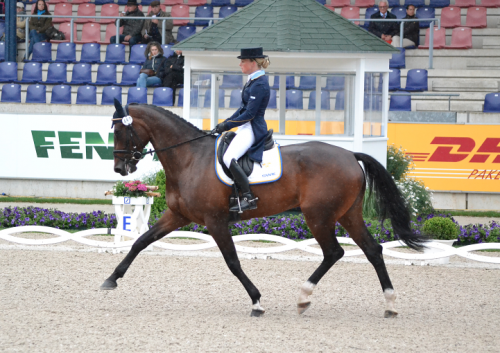 Sara Algottson-Ostholt and Reality 39 are in third place on a 37.4.

Germany snuck another pair into the top five when Andreas Dibowski and FRH Butts Leon scored 38.6 to move into fourth place with a very solid test. I was so disappointed when this horse was spun at the final horse inspection at Badminton, and it’s great to see them back in action here at Aachen — and looking very good at that. Jock Paget and Clifton Lush also added some nationality diversity to the top five with a score of 38.8 to move into fifth place. The horse struggled a bit with the atmosphere at Badminton when I last saw this pair, but the horse handled the tension in the Deutsche Bank Stadium very well today. Marilyn Little and RF Smoke on the Water did not fare so well with the atmosphere in the ring, as Smoke seemed a bit unsettled. He broke to the canter during the extended trot and had a sticky canter transition out of the reinback. But this was still a very solid performance for Team USA; Marilyn and Smoke scored 49.8 to move into 19th place. 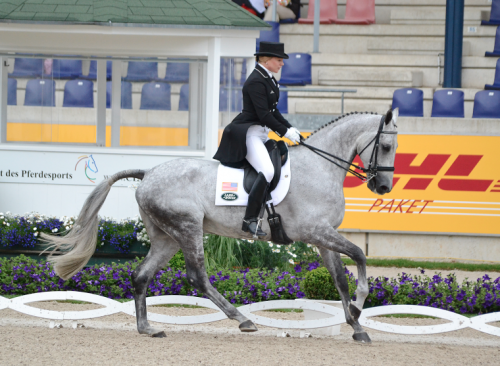 Marilyn Little and RF Smoke on the Water scored 49.8.

The team standings remain unchanged: Germany in first, Sweden in second and Team USA in third. We’re on an hour-long lunch break now, and it’s going to be a very exciting conclusion to the dressage here at Aachen. A light rain has started falling on and off, but the Deutsche Bank Stadium is mercifully covered, leaving me and the rest of the spectators dry. After three of our four Team USA pairs have ridden their tests, Tiana Coudray and Ringwood Magister are still our best placed pair in 11th place. Michael Jung and La Biosthetique Sam FBW lead off the fourth and final group at 1:45 .m. local time (7:45 a.m. EST), so I hope you all have joined the land of the living by then so you can catch their test on the live stream. We also have Will Faudree and Pawlow still to ride for Team USA, as well as Sandra Auffarth and Opgun Louvo and this year’s Rolex winners Andrew Nicholson and Quimbo. Go Aachen! 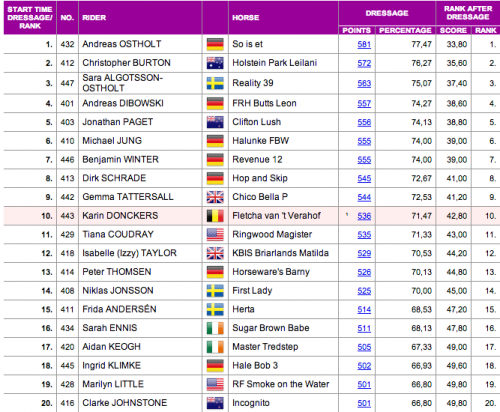