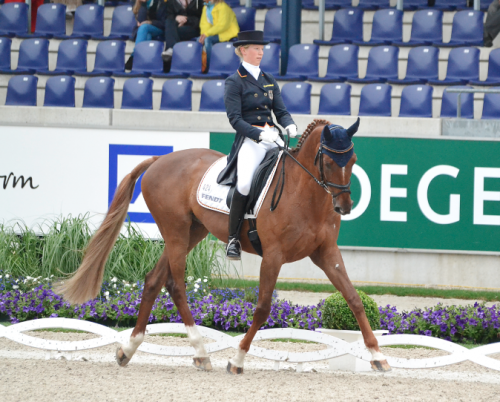 Sandra Auffarth and Opgun Louvo win the dressage on a 31.8.

The lead changed hands twice in the final group during the exciting conclusion of dressage at the Aachen CICO3*. And while it looked like Germany might not maintain the lead going into the show jumping tonight, Sandra Auffarth and Opgun Louvo rose to the occasion to win the dressage on a 31.8. Andrew Hoy and Cheeky Calimbo scored a very impressive 32.6 to lead initially with just three riders to go. But Sandra and Opgun Louvo showed just how good they can be under pressure and in front of a very excited crowd. There’s a very real chance Sandra would have cracked the 20s had the horse not swapped leads on their center line at the very beginning of the test. That mistake definitely hurt her marks in the first half of the test, but Sandra fought for every mark that followed and clawed her way back throughout the rest of the test in a truly impressive performance. 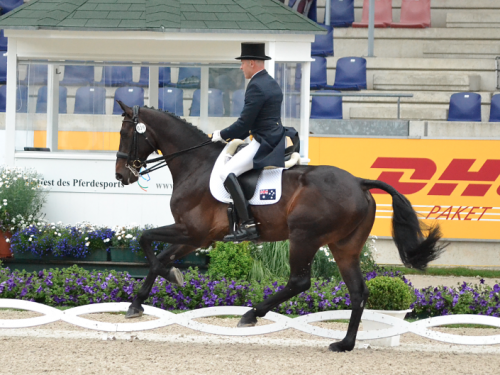 Andrew Hoy and Cheeky Calimbo are in second on a 32.6.

Germany holds three of the top five spots going into the show jumping tonight,  as Ingrid Klimke and Tabasco TSF scored 34.8 to move into fourth place. This horse is one of those you have to see in person to appreciate how truly striking he is. Aside from the first change coming much too early — it was beautiful though! — this was a very consistent, soft, rhythmic test. Tabasco TSF snuck in a mini crow hop after the final salute, which drew a laugh from the crowd and a big smile and pat for the horse from Ingrid. They make a lovely team. I’m sure you’ve noticed by now that I haven’t yet mentioned Michael Jung and La Biosthetique Sam FBW. Michael — or Michi, as they call him here in Germany — and Sam were the first to lead off after the lunch break, and Sam just didn’t seem himself today. While the test was accurate, it seemed a touch quiet to me and lacked impulsion in certain movements. Of course, the test was still very good; Michael and Sam scored 36.4 to sit in sixth place. 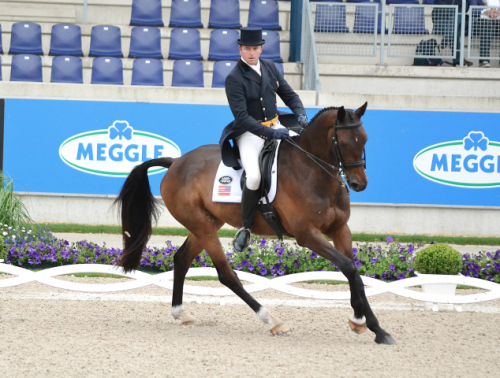 Andrew Nicholson and Quimbo also seemed to struggle a bit today. This year’s Rolex winners performed a nearly flawless test in Kentucky, but Quimbo also seemed a bit quiet, especially in the canter work. Toward the end of the test, he seemed to come close to breaking at certain points, and the spectators sitting around me even started clucking in the final few movements. Andrew and Quimbo are sitting in 12th place on a 40.2. Will Faudree and Pawlow are just behind them in 13th place on a 40.6 and are our highest placed American pair. Ernie snuck in a tiny canter step in the first shoulder-in but settled in nicely after that. We now have a three-hour break before the show jumping starts in the main stadium. My plan is to walk the cross country course and try to catch up with some of our U.S. riders during the break. Stay tuned for much more from Aachen! 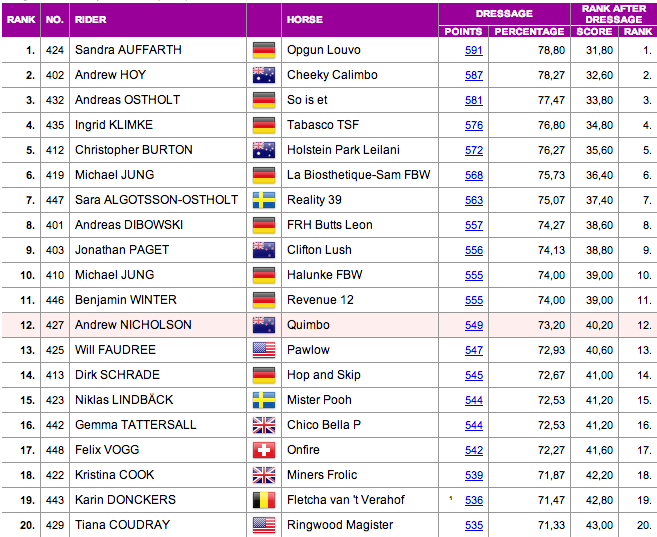