We’re thrilled to welcome Stephanie Rhodes-Bosch back as an Eventing Nation guest blogger. Stephanie and her incredible partner Port Authority are well known on EN for their incredible 2010 season, during which they helped Canada win team silver at the World Equestrian Games and placed ninth individually, as well as garnered a fifth-place finish at Rolex. Ollie has been recovering from an injury, and is just starting back this season.  Be sure to like Steph on Facebook and follow her on Twitter.  Click here to read her first installment this year: Poised For A Comeback. 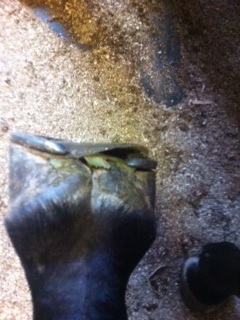 So most of us horse people are aware that horses are accident prone. We are also familiar with the terrible timing that our equine partners have for their mischief and clumsiness. There is a fairly common (although cynical) belief that its the horses who are the most attentively-cared for who manage the most impressive stunts with the most problematic timing.

I can attest to this after dealing with Port Authority’s lead up to Surefire Farm HT last weekend.

If any of you have read my previous EN entries, or if you follow me at srbequestriansports.wordpress.com you will know that Ollie has been rehabbing from an injury since September of 2011. During this time period, I had little to no incidents with him. He was turned out with no boots on, from 7-3 with inconsistent supervision (he’s very good about eating grass when it’s available and isn’t one to throw tantrums when he wants in). No lost shoes, no bumps and bruises, and all of his blood stayed on the inside where it belongs!

About a month ago, we got the all clear from Dr Ober to enter Surefire to kick off our season. He has been in full work including jumping since January. Pretty much right after we made the plan to enter, I arrived to the barn one morning to find a hot, squishy swelling on the inside of THE leg. It looked nothing like the swelling he had when he was injured, and he was sound…but it’s hard to rationalize that at times! Into the trailer we went for a road trip to see Dr Copenhagen, who has seen Ollie lots over the past year or so with Dr Ober. It was determined pretty easily that he was sound and the swelling was superficial…he must have interfered and whacked himself, which is impressive because he had just begun being turned out in boots again. (Therein is the basis for the theory that its the carefully managed ones that mess with us the most!!) Thankfully, the swelling came down quickly and life resumed as normal.

The first cross country school, although it was a full body and mind workout unlike any I have had in a while, produced no incidents. Several days later, Ollie came in from the field in need of some assistance. Most horses pull shoes at times, grabbing a heel of a front shoe with a hind toe and pulling… I would have preferred that! Ollie somehow grabbed the plastic pad under his shoe, and managed to partially displace it. My efforts to squish the pad back into place were completely unsuccessful and in the end farm manager Dave cut the pad out with some garden pruners. The farrier came later in the day to repair it and on went the bell boots.

The second cross country school was much more civilized, although was two days later than planned because of the pulled-pad debacle followed by torrential rain. Day after the school, two days before Surefire…guess who has angry, irritated, swollen legs from boot rubs???!  This guy…

Now I feel like this story is a bit of a saga. It goes on and on. It definitely felt like drawn out, dramatic, and no fun at all!! Two days of sweating, fleece-lined booting, and general micromanagement later, we were packed and braided for the trip to Surefire.

6 am on Saturday, day of show… I can’t for the LIFE of me get the %*€~%* desitin/furazone mix off of his legs! After soaping and washing with a strong detergent, I still have a goopy layer of diaper rash ointment that won’t budge off his fetlocks or his face… After a quick text back and forth with my friend Lisa Barry, who assured me she had a remedy and would meet me at the show, I went to load up.

Now, 9+ years ago when my parents bought Ollie, they also bought a horse trailer that was bigger as better for his highness. He has had this trailer for YEARS!! But because he was braided (??) he apparently got excited and scrambled around while loading, ultimately bashing his upper hind leg and creating a delightfully large wound. At this point, I will admit that I gave up on competing that day. The wound wasn’t deep or really bleeding at all, but still. What more of a sign did I want?! After assessing the damage, and figuring that my trip to Purcellville would be about the same amount of time as waiting on a vet, I slapped some SSD cream on the wound and, after texting the faithful Dr Copenhagen to inform her of the situation, drove away.

Once I arrived at the show, things definitely started to take a turn for the better. Lisa showed up with her Dawn dish detergent, and after persistent scrubbing managed to make Ollie’s extra white markings disappear. The ever friendly and helpful Laine Ashker let us borrow some AluShield to seal up the scrape on Ollie’s leg, and Dr Copenhagen examined the boot rubs and the wound on his leg and told me to put my saddle on for dressage! Whew…

Wait? Crap… Now we have just enough time to get dressed and hack to the dressage! Luckily that wasn’t too much of a scramble. I definitely used our dressage test as a permission slip to jump that day. Not having had much left in the way of emotional energy, he was actually very relaxed and happy! I should see if I can find a way to be that casual while also asking for more than just the bare minimum of engagement….

The jumping phases were as I had hoped, really fun and a little bit exciting. I was hoping that he would just chew the jumps up and spit them out and he certainly did. He was respectful of the combinations and the turning exercises, but was the definition of bold and into it on cross country! I was so thrilled with the opportunity to have him out doing what he does best.

I definitely prefer to not need my veterinarian to give me the go ahead for competition, but I do appreciate the dedication of vets like Dr Ober and Dr Copenhagen who have taught me how important it is to stay on top of every little detail. Thank you for coming out to reassure me!

I’m hoping that now every thing is a little more tame in the lead up to MDHT 2 and his Intermediate run. I know things happen and we have to be able to deal on the fly, but come on man… That was enough.

Stay tuned to SRBequestriansports.wordpress.com for more updates on Ollie and the rest of the crew as we get closer to the next competition.