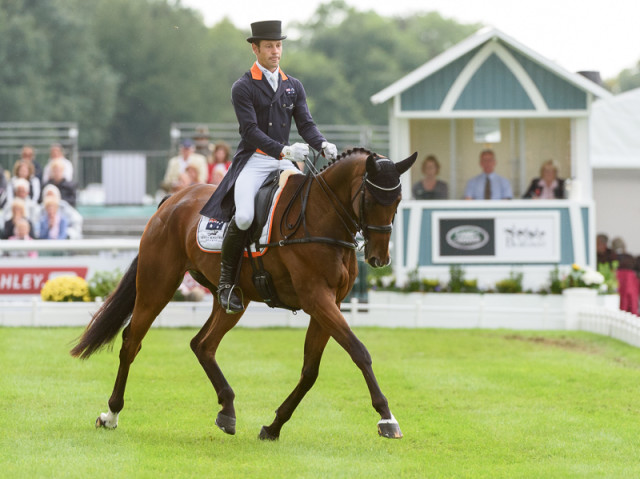 Friday afternoon is generally exciting at any three-day event and this year’s Land Rover Burghley Horse Trials proved no different. By the end of the day the top of the leaderboard is awash with Australian and New Zealand flags — ten in the top fifteen. Chris Burton and Nobilis 18 lead 30.2, followed by Bettina Hoy and Designer 10 in second on 34.5, and Andrew Nicholson and Nereo in third on 35.2.

Andrew Nicholson laid down the gauntlet right after the lunch break with a very smart test, almost mistake free but for an awkward moment when Nereo trod on his own hind leg with a front foot during the rein back. Apart from that they nailed it, and it wasn’t a surprise to see him leave the arena on a sub-40 score: 35.2 coming dangerously close to Bettina’s leading 34.5.

Not to be outdone, compatriots Blyth Tait and Caroline Powell, the very next in, also rose to the occasion and juggled the top ten even more. Caroline’s test was beautiful and she sits fourth overnight right behind Andrew Nicholson on 37.8, while Blyth conjured every single point possible out of Bayr Necessity to score 42.2 for 10th place going into the cross country.

Andrew Hoy and the former Sandra Auffaurth ride The Blue Frontier looked like they might challenge the top three until a couple of mistakes in the last change and canter let them down. Tim Price and Ringwood Sky Boy also were looking golden but uncharacteristically missed two changes; nonetheless both riders are still in the tightly packed top ten with everything to play for on cross country tomorrow. Oliver Townend is the sole British rider in the top ten, pulling a 38.1 out of the bag on MHS King Joules to lie in 5th place. 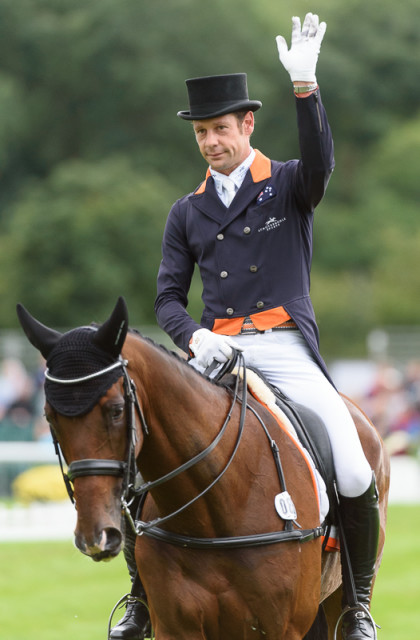 Chris Burton went into the main arena about halfway through the last batch of riders and blew everyone else out the water, scoring 30.2 and smashing the British record for a four-star dressage score. Chris knew the horse was capable of doing such a good test and knew the horse had been in good form lately and so had been optimistic coming into today.

“He was just fantastic today, he was very relaxed, he let me ride him, he let me ride the movements and I was really proud of him. He’s done some good tests before and I’d told the owners I was hopeful because he’s been very relaxed all week; at Badminton he got very lit up by the crowd … so I’m pleased I was able to do a good test today.

“It’s always hard to feel confident when you’re facing the Burghley Horse Trials cross country course. (I’m) more terrified, but he’s a good blood horse and he’s a special cross country ride, so I hope he copes well. I think Mark’s built a fantastic course here and it really makes you attack it and if you’re lucky enough to have a good ride, you’ll really feel very special.”

There’s nothing in particular that Chris could pick out on course as terrifying: “Fence 1 to 30, they all are! It’s Burghley! It’s always big, it’s always tough, it’s relentless. I walked a friend up to the Leaf Pit the other day and it doesn’t matter how many times you walk that bloody fence, it never gets any smaller, and it’s a long way round. Of course I’m looking forward to having a go, but I can’t say I’m excited about it.”

Bettina Hoy now slips to second place and admitted she wasn’t sure if she’d retain her top place all day: “I expected Burto to go ahead of me,” she laughed, “it was a beautiful test. It was technically so well ridden and the mark is well-deserved.”

As for the course: “I think you need to have it very clear in your mind where you want to ride at each individual fence and it’s certainly an attacking fence and I think we three (her, Chris Burton and Andrew Nicholson) are all glad we’re sitting on such good jumpers because I think you’ll need a seriously good jumper and obviously a very fit horse.” 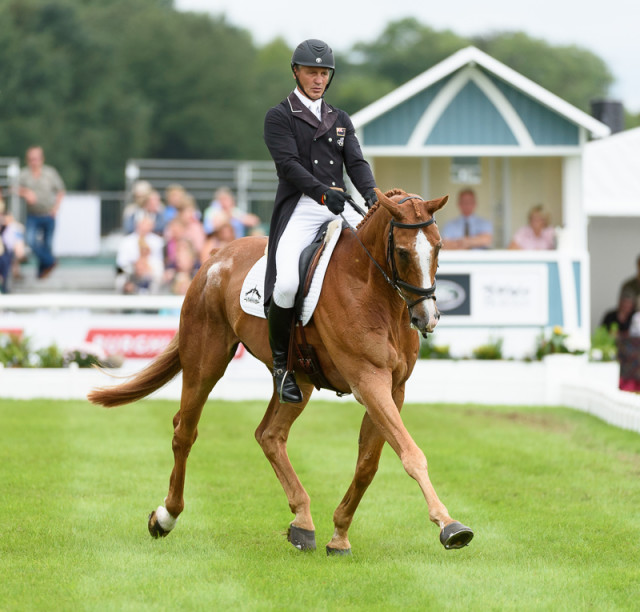 Andrew Nicholson is another rider here this week making a remarkable recovery; last year he watched the event on television after a neck injury that was potentially life-threatening but it never occurred to him that he wouldn’t return. “I was quite sure I’d be back and here we are, I’ve always been very confident about it.”

Not just back, but back in the top three after the first phase, with his best phase still to come tomorrow. “Nereo is very, very nice to ride in the arena. He’s not a naturally gifted dressage horse — he’s a big, powerful galloper, he’s not meant to be crammed into a small arena — but he’s 16 years old, he’s done a lot of work, he’s been to an awful lot of events and he’s a pleasure to ride in there. You know he’s going to go in, he’s going to focus on what he’s got to do, not look at the crowd or the flowers or be surprised by anything, he basically makes my job very easy.”

Andrew, like all the riders, has respect for the test ahead tomorrow. “I think the cross country course is very nice, I think it’s very demanding, I think it’s pretty difficult all the way around. I think the way Mark Phillips has got the jumps very close together at the beginning — three water crossings in the first two minutes — will make you be slower I would have thought, then you start chasing the clock to make up time and you get to all the big, technical fences. 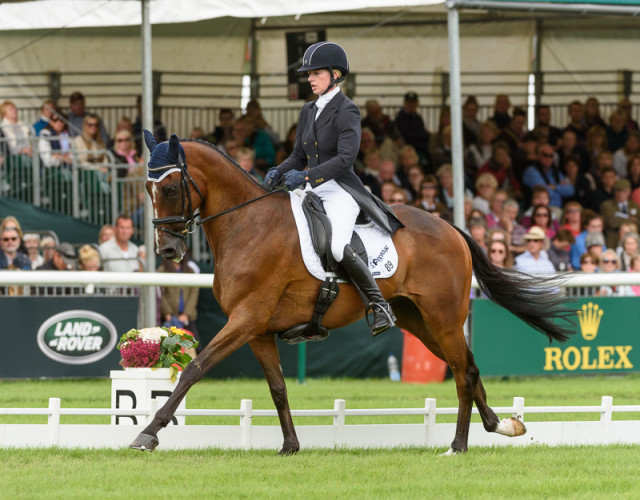 We had to wait until almost the very end of the afternoon to see our last U.S. rider Holly Payne Caravella go with the Never OutFoxed Syndicate’s Never Outfoxed. By that time we were all reeling somewhat from Chris Burton’s scores and the ever-changing top end of the scoreboard and the mid-test elimination of Frenchman Rudolph Scherer Makara De Montiege after his horse was judged to be unsound. You could say the atmosphere was somewhat electric.

Luckily there was no such drama with Holly and Fox. They went in and did as good a test as they could in the circumstances, and Holly was pleased with her score of 55.8,.“He’s always a difficult horse on dressage day but I was really happy with him. I had no idea how he’d handle this atmosphere and the long hack up through the cross country is a little bit challenging for him but I was really pleased with him. I thought he was really good.

“I was just trying to stay calm and keep him calm and keep him relaxed. He definitely got a little bit amped up when he heard the crowd applauding the rider before me, then he settled a bit again. He went hot and cold a bit, but he’s only ten and he hasn’t been around that much. He’s done Kentucky twice but this is his first time overseas and I’m really proud of him. He’s got a big future ahead of him and I think this was a step in the right direction.” 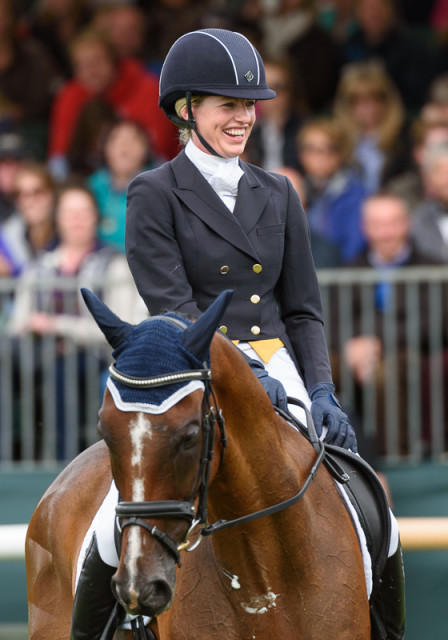 Holly has competed at Blenheim before but this is her first Burghley. “It’s huge and intimidating. I’m sitting on a really great cross country horse so that should make me feel a bit better, but it’s enormous and it’s long and there’s just so much to do out there. He’s totally capable of doing it but I think it’s going to be a big challenge. It’s definitely the hardest four-star I’ve ever seen.

“Hopefully the weather holds off. I heard it’s supposed to start raining and being the second last to go the footing is always a concern. He’s actually run both times in Kentucky in pouring rain so we’re used to it.” Holly will probably walk while people are going tomorrow and watch to see how the course is riding, and then she said she’d probably go back to the riders’ tent and watch some more and ‘stress out’ while she waits some more.

Thank you to all the riders for all their time and patience talking to us, and wishing them safe and speedy rounds tomorrow. You can catch up on comments from more riders in the top 10 here and read quotes from Phillip Dutton and Libby Head here. Stay tuned for an exclusive interview with Nilson Moreira da Silva!

Cross country starts at 11:15am GB time (6:15am US eastern) and the last horse is due on course at 3:45 pm (10:45am US eastern). Elisa Wallace will be first out for the US squad at 12:23 GB and she’ll be wearing a jockey cam for the BBC and Burghley TV coverage so we’ll get to see her and what she’s seeing!

Bunnie Sexton and Rise Against set off at 1:21pm GB, and then Phillip Dutton and Fernhill Fugitive at 2:04pm. Nilson Moreira da Silva and Muggle are due to leave the start box at 2:12pm GB, followed by Libby Head and Sir Rockstar at 2:27pm. Holly Payne Caravella, second last to go, 3:41pm.

Eventing Nation will be live tweeting most of the day as much as possible and then bringing you our U.S. riders’ reactions and wrap up of the day. The cross country will be live streamed in the U.S. on Burghley TV, but it will be shown on a delay and will not start until 8 a.m. EST. Hoping we all get some sleep tonight and that the weather behaves tomorrow. It’s been another fantastic day at the Land Rover Burghley Horse Trials and we cautiously excited for the next two.