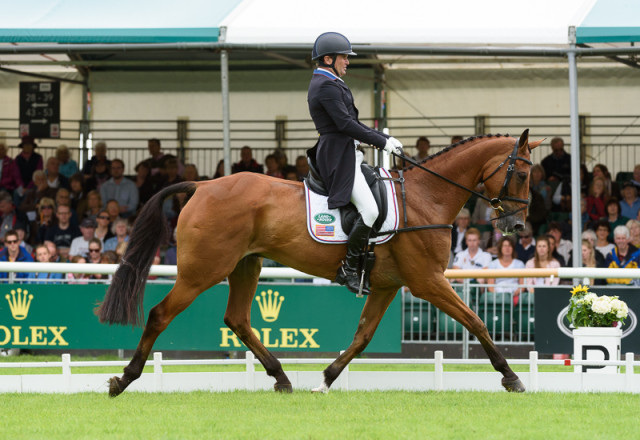 Friday has dawned grey and gloomy at Burghley with the persistent threat of rain, a completely different day to the bright sunshine and warm temperatures we basked in yesterday. There’s a lot more people here and also a lot more atmosphere. We thought that Bettina’s score of 34.5 yesterday would be hard to beat, and as we head into the lunch break on Friday only Sam Griffiths and Happy Times have come close, the only other combination to break the sub-40 barrier scoring 39.6.

Mark Todd and NZB Campino have taken over the number three slot so far on 42.2, just 0.1 ahead of Sarah Cohen and cross country specialist Treason in fourth place. We’ll bring you pictures and reports from them shortly.

Phillip Dutton was first to go today for the U.S. squad near the end of the first group in the morning and scored 50.5. Tom Tierney and Annie Jones’ Fernhill Fugitive looked fantastic in the warm-up and indeed Phillip said he started off feeling better than ever. “I’m a little disappointed; it started off as good as I’ve ever started, he was really good and then he just got a little bit backed off in the last part and missed three changes, which was very costly.

“He was going so well maybe I got a little bit too relaxed on him. He does tend to back off and not express himself so I should have anticipated that and ridden him a little better.” Olympic medalists are their own toughest critics!

Phillip acknowledged that Burghley is far from a dressage competition but wonders if he’s left himself too much to do. “It’s a big track tomorrow so we’ll take it a day at a time and see if can do a bit better there. There’s not one area of the course that stands out, it’s strong all the way. It brings you back to realising that you still need a really fit horse that can gallop for four miles and can jump big fences.

“Every jump is big and wide … you’ve got to have a horse that’s going to fight, they’ve got to have a lot of fitness, a lot of endurance. It’s a pretty special course; it’s a fair bit different to everywhere else in the world. The degree of difficulty and the terrain, it’s a real endurance test and Mark Phillips has built a really strong track. They have to gallop for a really long time and they also have to jump about 40 big jumps as well.” 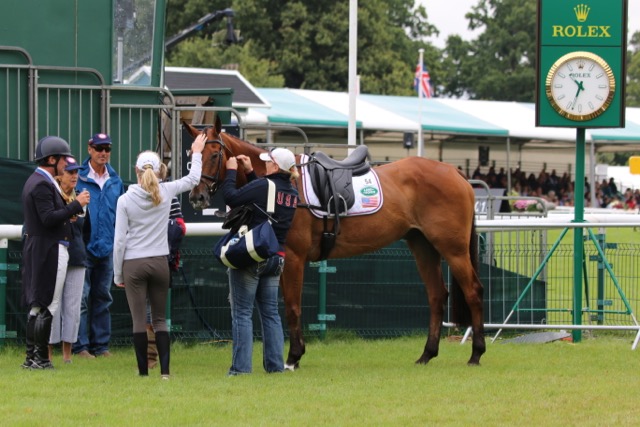 Fernhill Fugitive after his dressage test. Photo by Samantha Clark.

Fernhill Fugitive stayed at home at True Prospect Farm while Phillip was in Rio and was ridden by Jenny Caras and Emily Hamel, but before that underwent quite a demanding summer as he was still an Olympic prospect and so is apparently very happy now to be settled in at Burghley.

“He’s had a pretty tough summer. We did the Great Meadow CICO3*, and then we had to travel to Ocala and train in the heat there, and then back again so it hasn’t been the easiest time, but he likes it over here. It’s much cooler for him. It’s pretty horse-friendly for the summer.”

Luckily, Phillip is constantly being asked how it feels to be the newly minted Olympic bronze medalist. “It’s good when everyone reminds me! It’s obviously a childhood dream to stand on the podium, and I’ve done it fortunately in a team situation but not in an individual situation so it was a lifelong dream come true.”

And if he were to win Burghley? “Well, this would be another dream come true, this one! I might be a bit too far back I think to win from here but maybe another time we’ll give it another shot. This guy (Fernhill Fugitive) deserves his chance. He’s done Rolex twice now, and this is a bit of a step up for him but hopefully he’s ready for it. It’s fun to be in England where everybody is pretty much an educated event person and they know what they’re looking at, so it’s cool for us to come over and be a part of it.”

Nilson Moreira da Silva went a couple of horses after Phillip with the Muggle Syndicate’s Muggle, scoring 57.5 to best their score from Rolex by nearly 10 marks. We’ll bring you a video interview with him later, wifi permitting! 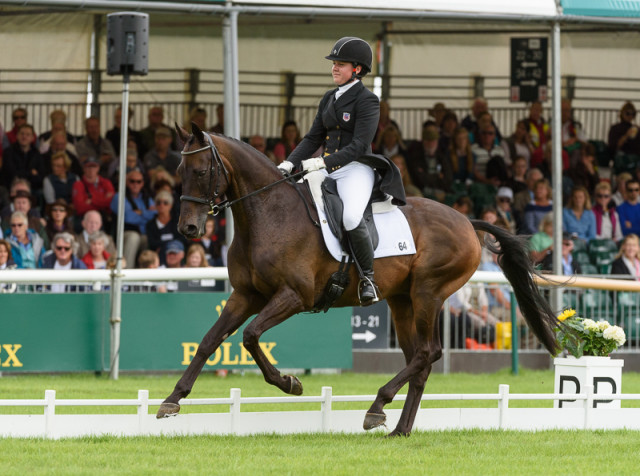 Libby Head and Sir Rockstar warmed up with Shaun Mandy, who’s been helping her a little this summer, and they looked like dynamite outside the arena. Happily, they carried that with them all the way through the test, and they also came out with a four-star personal best of 53.7.

A beaming Libby told me afterwards: “I couldn’t be happier! He went in there and did some of his best work and he actually did it in the ring, I’m just so happy he held it together really! He does tend to feel better on grass to me. I think it just feels like a little bit less of an atmosphere, it’s seems like it’s not such a big change from warm-up into there, so he keeps his cool a little better and I think getting into atmospheres like this more often, he’s finally settling down. I

“t was kind of crazy to be going in there in that atmosphere, but he walked in pretty quietly and that made me happy immediately, so I could enjoy it a little bit better. Usually I’m still holding my breath until he’s entering the arena and he seems like he’s going to be good, and then I can take a deep breath and know we’re going to be okay.” 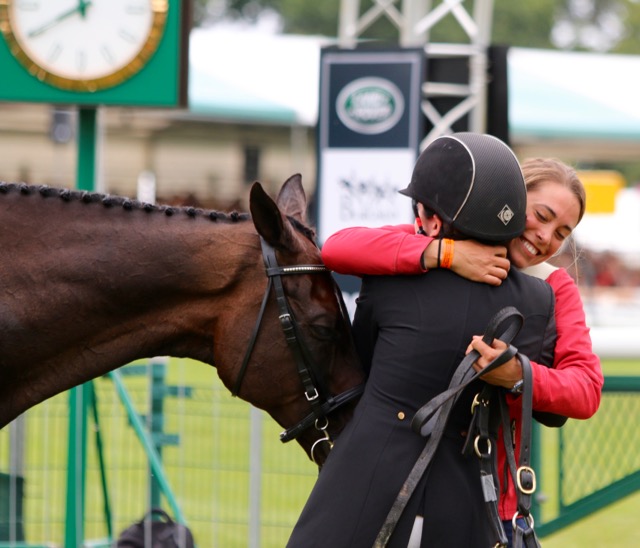 Libby will probably walk the course a couple of times this afternoon and tomorrow. “I’ll just try and keep calm and not get too nervous, try not to think about it too much. I like to watch some go out, and that will be good because I’m later so I can see how the course is riding. I’ll definitely go out there by myself in the morning and walk it again.”