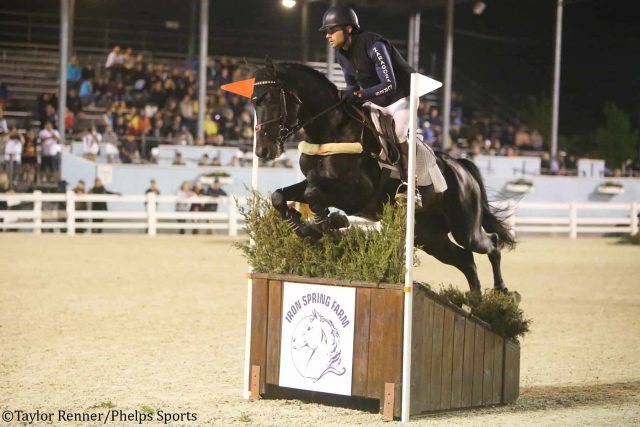 The 10-year-old Oldenburg stallion (Sagnol X Poetic Patter xx, by Nostalgia’s Star xx) was one of only four horses that didn’t add a fault in the first round, in which pairs tackled Capt. Mark Phillips’ course of cross country fences and show jumps across set 1,000 meters in the iconic Dixon Oval and Wheeler Ring.

Just three pairs managed fault-free rounds in the jump-off, with Chris and Sandro’s Star crossing the finish in a speedy time of 78.260 seconds to take the win and $12,500 in prize money. Less than half a second separated the top three!

“I was a little overwhelmed when I was walking the course and didn’t know how it was going to ride. It rode beautifully and going quick in a small space over solid obstacles, you’re not really sure (about striding), but I think they did a wonderful job designing the courses and it challenged the horses but also rewarded them,” Chris said.

“During the jump-off) I thought I was a bit slow after fence 15 (a brush fence) there and I thought I lost him a little bit in the turn, but I saw a good shot at the last and kept galloping down it, praying it stayed up.” 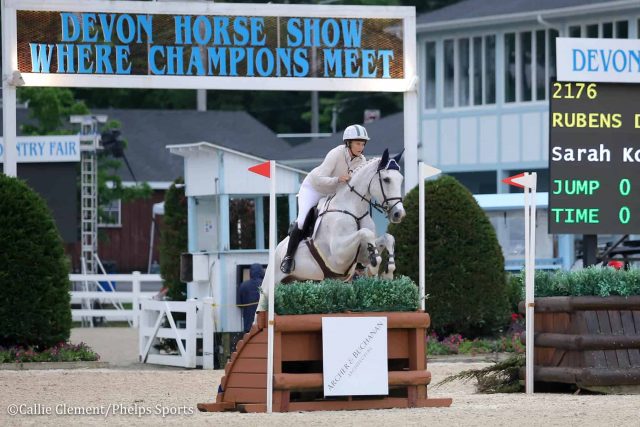 Sara Kozumplik Murphy and Rubens D’Ysieux delivered fault-free performances in both the first round and jump-off, ultimately taking second place and $10,000 in prize money with a time of 78.580 seconds.

The 13-year-old Selle Francais (Balougran X Silver Shadow, by Mr Blue) owned by the Rubens D’Ysieux Syndicate won the inaugural Devon Arena Eventing class last year, and Sara said she was thrilled to finish close to the top of the leaderboard again.

“Last year (after winning at Devon) I went to Bromont and then I went to Millstreet in Ireland, and this paid for half of my flight to go to Millstreet. It’s really good for us in eventing. We are getting a few things with more prize money, but it is a really big deal for us. To have something like this where we can get a bit of cash on a good horse makes life a lot easier,” Sara said.

“The crowd here is like nothing I have ever seen before in this country. Even in Kentucky, it’s not like that carnival atmosphere where so many people are cheering along.”

Phillip Dutton and Kevin Keane’s Sportsfield Candy, an 11-year-old Irish Sport Horse by Condios, delivered the only other fault-free round in the jump-off to finish third in a time of 78.640 seconds for $7,500 in prize money.

Lisa Marie Fergusson and her own Honor Me, a 12-year-old Welsh Sport Horse (Brynarian Brenin X Dream Contessa), had the fastest time in the jump-off of 73.010 but added 4 faults to finish in fourth place with $5,000 in prize money.

Phillip Dutton also finished a second horse in the top five in Annie Jones’ The Manager, an 8-year-old Thoroughbred (The Cliff’s Edge X Misty Sabin, by Al Sabin) who added 4 faults in the jump-off in a time of 77.400 seconds to place fifth and take home $3,500 in prize money.

Click here to view final scores from the $50,000 Devon Arena Eventing Class. You can rewatch all the action thanks to the USEF Network live stream.