For 673 accepted trainers, the 2019 Retired Racehorse Project Thoroughbred Makeover is fast approaching! From the beginning of the year until the Makeover, to take place Oct. 2-5 at the Kentucky Horse Park, four of those trainers have been blogging their journeys, including their triumphs and their heartbreaks, successes and failures, for Eventing Nation readers. Read more from EN’s 2019 Thoroughbred Makeover Bloggers: Lindsey Burns, Hillary McMichael, Clare Mansmann, Jennifer Reisenbichler.

Today Clare catches us up on her Makeover partner, Alarming (Unbridled’s Song – Malibu Legacy, by Malibu Moon), who — spoiler alert — might not make it to the Makeover after all but has a bright future ahead nonetheless.

We don’t always make a big deal out of it when a horse sells. Some new owners aren’t all that into the limelight, and since our horses tend to get a lot of pushy limelight (I’m very guilty of this but I love them so much I want to squish and squeeze and tell everyone about them and I CAN!!!), we are respectful of others’ wishes.

Alarming, however, gets no such respect. He’s just a bit too much to hide his light under a bushel. He’s too big and too funny and too boisterous and too … everything to not share! And so he not only gets a big deal, he gets a little extra limelight.

When we first met Alarming, it was in the coliseum at the Kentucky Horse Park at the end of a long week of showing. We had agreed to join in the first ever Makeover MasterClass at the 2018 Thoroughbred Makeover, and were very excited (though we weren’t sure what to expect), but when Sunday rolled around and most people were heading home, our kids were tired, the “manny” was worn out, and I’d lost 10 pounds of water weight (but looked great in my RRP shirt!), what we really wanted was our own beds and to shower without flip flops. But, of course, we love our RRP and so we scurried over to the indoor, 7/8ths of the way packed, Tiz Solo Vino in tow. It was a great group of people in that arena, though, and we made lasting friendships and contacts and isn’t that just what this Makeover has done for so many?

Amongst all the peopling, we met none other than Alarming, brought to the demo by the lovely folks at MidAtlantic Horse Rescue (MAHR). He was tall, dark, and handsome. He was on his toes but not off of them. He was a little like a tea kettle, and our job was to let the steam out before the whistle sounded. He allowed us to show some of our training methods (which, if you were one of the lucky few in the audience, you may remember consisted of me scurrying around trying not to get run over by Tom, and this is, in fact, a large part of our training methods…promise…) and was supremely responsive. We were alarmingly smitten. 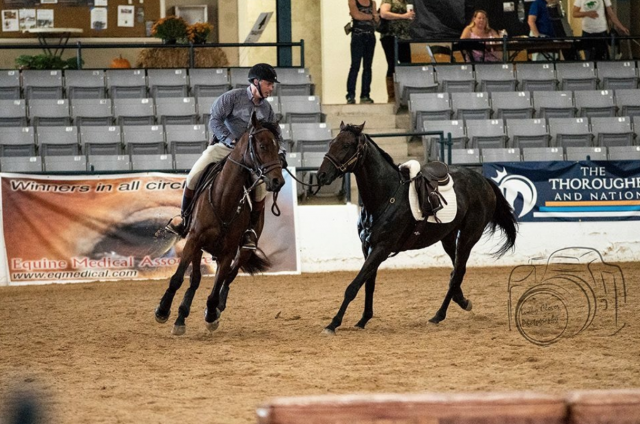 He came to our farm shortly thereafter, and won everyone over with his adorable bedhead, smarts, and affection. We even caught our manager sitting on him in the field in nothing but a blanket, just for fun. And that’s Alarming’s motto: just for fun. 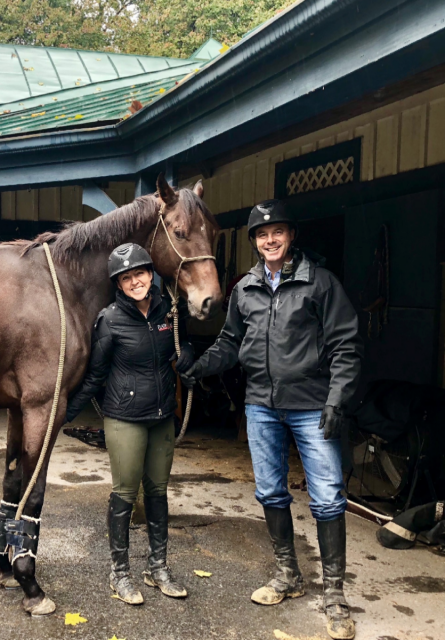 I don’t know why, but he is the softest horse in the world. 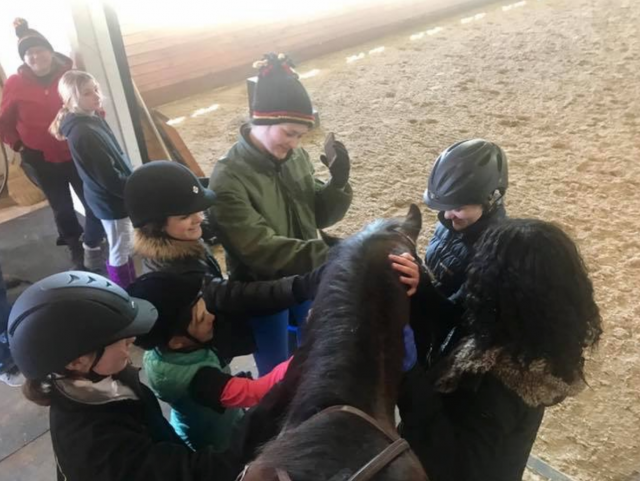 Alarming at his first “show” at Beverly Equestrian, where a gaggle of teenage girls swarmed him to exclaim over his softness. He. Was. In. Heaven.

He grew inches over the winter. He went from gangly teenager sitting on the bench to beefy quarterback dating the prom queen at an alarming rate. 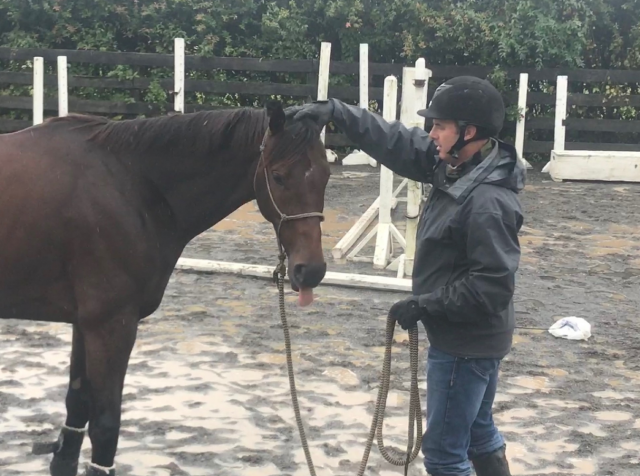 This is when he was small. 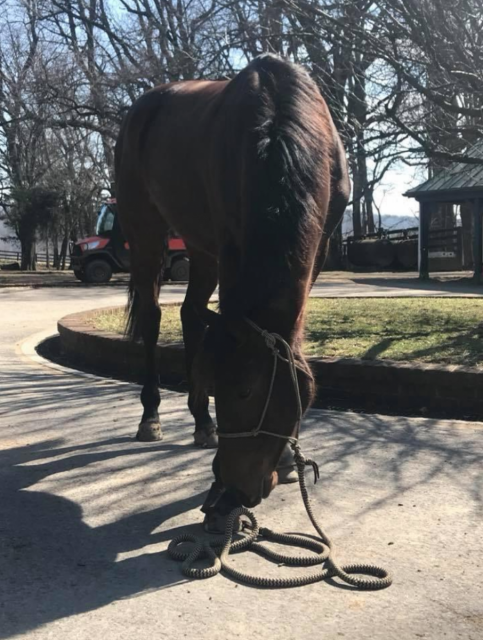 Visibly growing in this picture.

He blew us away as he developed. That gawky stage was short-lived, as he learned where to put his feet. We knew the value of going slow, and allowing him to tell us what he needed and when. We learned to train better, to ride better, and we had a heck of a lot of fun. 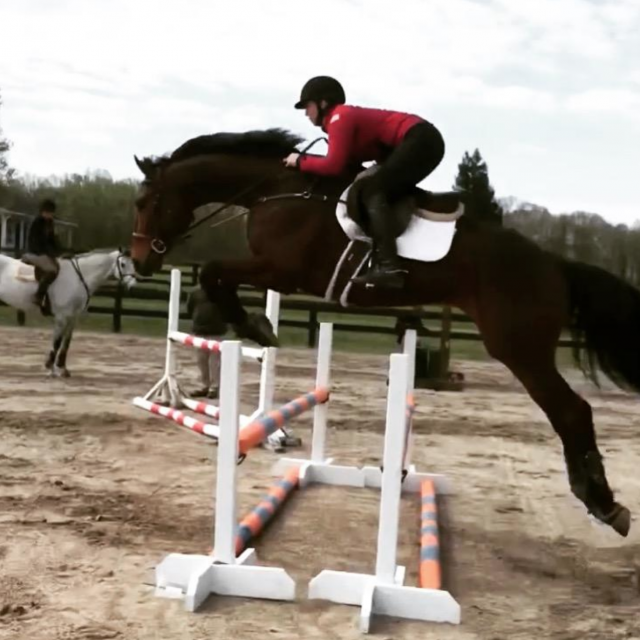 He doesn’t know how to lick. He licks with his tongue out and rubs it on you. That’s weird, and probably on purpose. 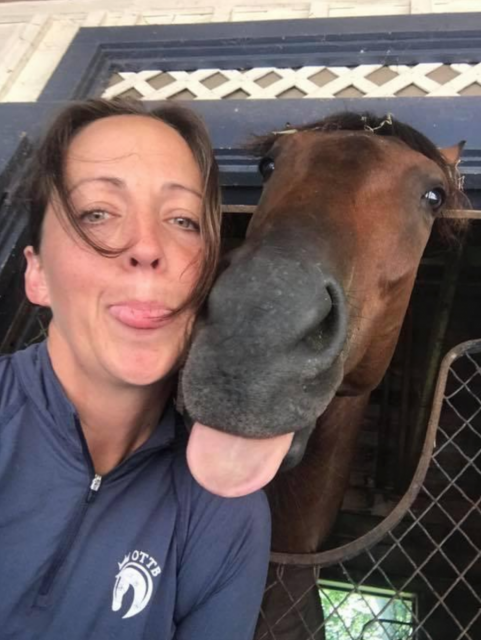 We put time and thought, a lot of sweat (no blood), a few tears, dinner conversations, breakfast conversations, driving conversations, and a whole lot of laughs over this horse. We had dreams for him, and despite ourselves, we always knew those dreams would not include us forever, much as that’s what we would want. 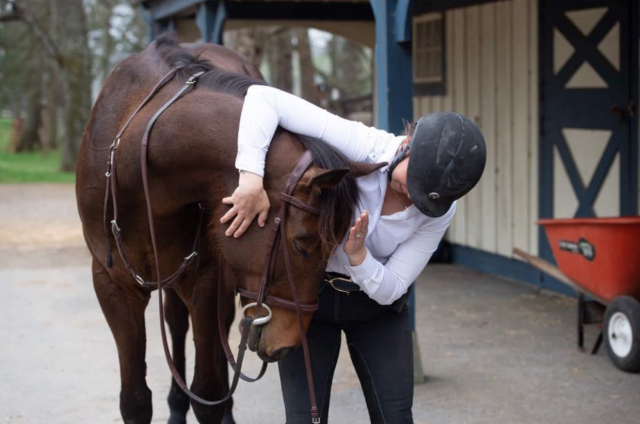 And that’s the crux of our job and our promise. Our horses must move on, find their job, find their people. We are but stepping stones in their lives, though we strive to provide a firmness in their foundation, so that their next homes are happy and functional and fruitful. Their futures are not about us, and not in spite of us, but in part because of us, and the time and effort and thoughtfulness we put in to each and every horse.

And so Alarming has found his spot. He is the huntsman’s and staff horse for the beautiful Keswick Hunt in Charlottesville, VA. It is with a team of people we know and respect, and we are nothing but thrilled for this horse. Many people have asked, rather in shock, if we were still taking him to the Makeover. While there are some owners who would enjoy that, the truth is, the horse is not ours anymore, and he never really was. He has a job to do, and a job he loves doing (and is quite good at), and taking him to the Makeover would be for us, and no longer for him. Our whole purpose is to find a way forward for any horse that comes to us, and remembering to leave ourselves out of it.

We aren’t just rehoming, rehabbing, or retraining, but reCAREERing. Alarming is not the first, nor will he be the last, but he is, without a doubt, alarmingly special, and will hold a place in our hearts and minds and stories from this day forward, and every future horse will benefit from what he taught us.

And so in true, sappy Clare fashion, here is a montage of his training for the past nine months.You will see the highlights, but we will remember the quiet moments and the snuggles, and hacks and lightbulb moments, and yes, the significant airtime and how to ride a horse who lands on his hind legs like a kangaroo, just because he can. 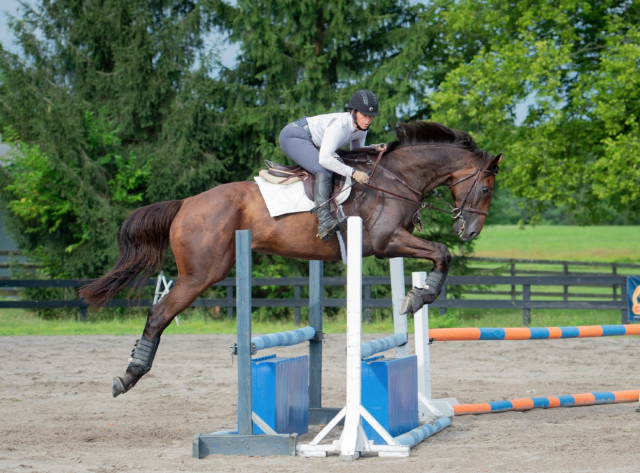