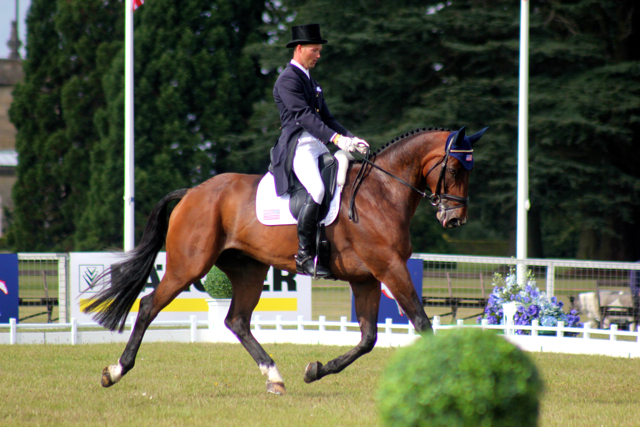 Clark Montgomery laid down the gauntlet Thursday at Blenheim Palace with a beautiful, accurate and flowing test to take the Day 1 dressage lead. Ever the perfectionist, he said afterwards that there were a couple of things that could have been improved, but that he hopes it will be good enough to keep the lead throughout tomorrow, and if not he hopes it will be close enough. We sat down shortly after his test to chat.

Although he admitted that next year is a long time away when you’re discussing horses, the tentative plan would be for Glen to prove himself at CCI4* level to the U.S. team and that they’d be aiming to do that in the spring with an eye, naturally, on the WEG in Normandy. 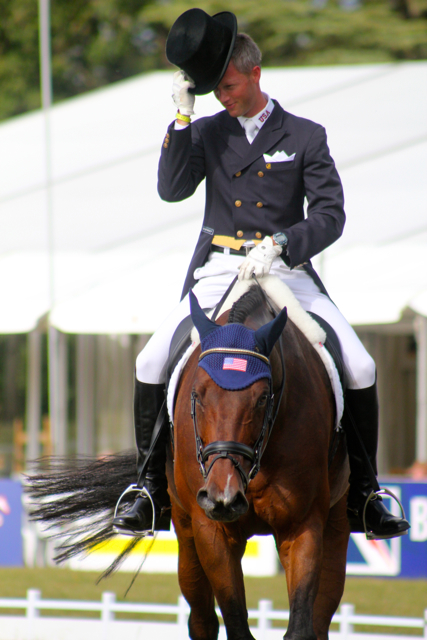 I was sorry not to see Jean Teulere’s test on Matelot Du Grand Val, but it moved him up into second place; if I remember rightly, I think this horse did Badminton a couple of years ago. It’s a tall, rangy bay and I remember liking it then, and they also finished 16th at Burghley last year. 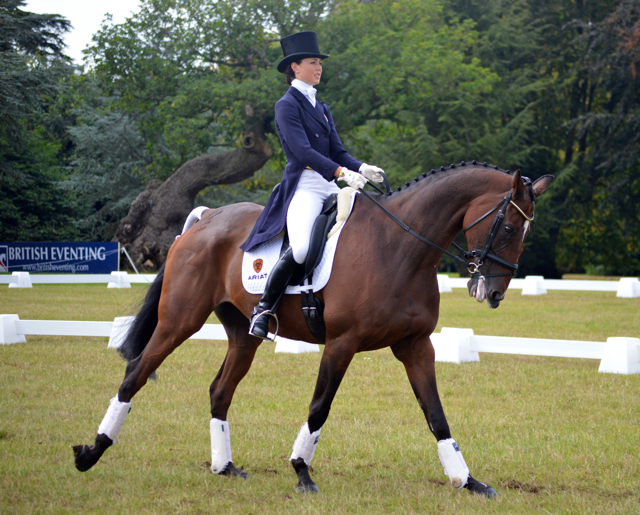 EN guest blogger Charlotte Agnew is sitting in third place after the first day of dressage at the Fidelity Blenheim Palace CCI3*, which seems like a splendid way to celebrate a birthday! Many Happy Returns, Charlotte! We chatted briefly at the end of the day to talk about the test and future plans for “Zulu.”

For everybody who’s been enjoying Charlotte’s blog (and who doesn’t?!), I’m delighted to be able to report that she does have plans to visit the U.S. in the not too distant future to teach clinics — watch this space! Charlotte added that it made her day this year when Hawley Bennett sent her a good luck tweet before Badminton — adorable! 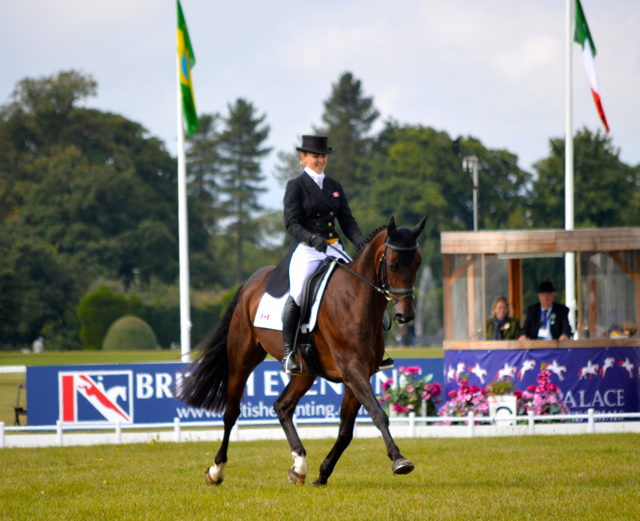 Jessie Phoenix, as reported already, rode a fabulous test on Pavarotti and I caught up with her later to ask her about it in a bit more detail.

Just before Jessie and I spoke, I caught Amanda face-timing with one of the girls back home, and she was showing live pictures of A Little Romance, aka Blue Eyes, Pavarotti’s girlfriend, to him on her phone. Jessie flies back to Canada on Monday, and Amanda and “Rotti” fly back next Friday. The U.S.-based American horses meanwhile drive back to Lieges on Tuesday and then fly back direct to Newark on Wednesday. It’s been a great day for the North Americans at Blenheim; not only did they all perform super tests but the camaraderie and team spirit is also high. David did a course walk at lunchtime with the majority of the U.S. riders, and we’re all quietly optimistic about the next few days. Again, I’m sorry that I can’t see everything as I feel as if I’m missing out on a lot, but a quick shout out to Liz Halliday who did a lovely test on her eye-catching young grey horse HHS Cooley to lie 12th in the  CIC3* for 8- and 9-year-olds. 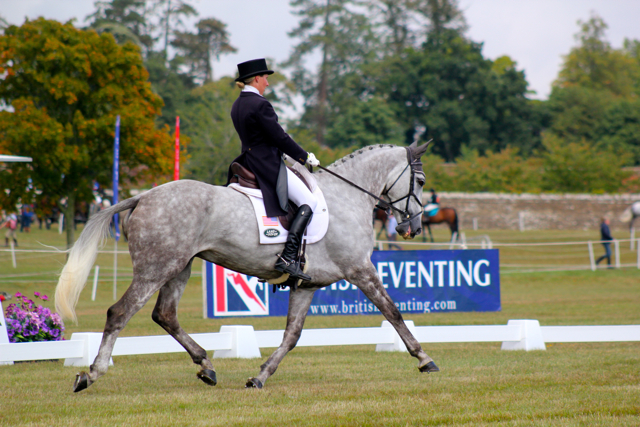 Tomorrow we look forward to tests from Meghan O’Donoghue and Cindy Rawson for the U.S., as well as Jules Stiller on her second horse, Pandora X. Also to look out for — Andrew Nicholson, William Fox-Pitt on Running Order, Mark Todd, Nicola Wilson, Pippa Funnell, Oliver Townend; the list goes on and on. Thanks as always for visiting Eventing Nation, and we’ll be back with lots more tomorrow. Until then, Go North Americans at the Fidelity Blenheim Palace International Horse Trials!