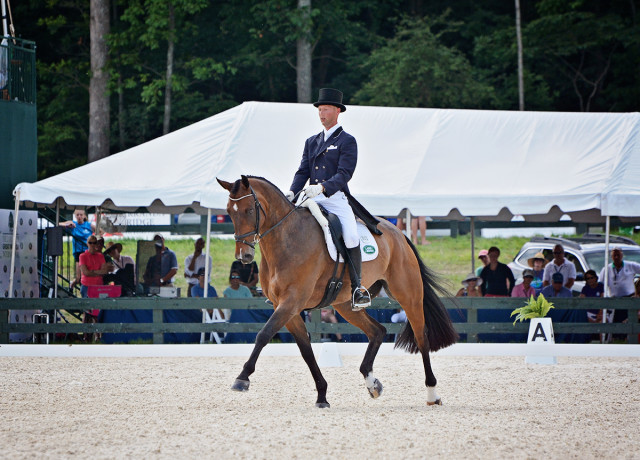 U.S. Olympic team members Clark Montgomery and Loughan Glen came into the Land Rover Great Meadow International, presented by Adequan®, as the heavy favorites to take the Nations Cup win, and they beat the heat today to lead the inaugural U.S. Nations Cup leg after dressage on 36.3, the only score in the 30s.

That mark has Clark and Glen easily holding a five-point lead over Rio traveling reserves Maya Black and Doesn’t Play Fair, and they would have widened that margin even more had it not been for two bobbles: one in the first halt when Glen nearly stopped at X and one in the second flying change when they lost a bit of rhythm.

“We started off with a mistake, which was really annoying. That’s the one move I forgot to practice in the warm-up because we kept the warm up quite short because of the heat. For Rio, he will not be trying to halt early! I just relaxed at X thinking everything was good, and he went to stop,” Clark said.

“Everything else felt quite good except for the second change. I turned across the short diagonal, and he felt good and I relaxed and he lost his balance. It’s such a short diagonal, and I didn’t have have time to fix it before the change. The change was clean, but it certainly wasn’t as good.”

Vivian Montgomery is very proud of her dad! Clark and Loughan Glen lead #GMI2016 after dressage

Still, the fact that Clark and Glen can make mistakes and still score a 36 is a prime example of why they’re such an asset to Team USA. Clark and the 13-year-old Irish Sport Horse gelding owned by Jess Montgomery, Kathryn Kraft and Holly and Bill Becker are the only active U.S. combination that averages in the 30s in dressage — and they can finish on that score.

“There’s the expectation to perform in front of the home crowd that hasn’t seen me in a long time,” Clark said. “That’s a funny feeling; I didn’t expect that. At the same time, it’s good because everyone is going to expect me to perform well at Rio, so it’s good to deal with those nerves on a smaller scale.”

Now Clark looks ahead to tonight’s show jumping, when Glen will tackle Marc Donovan’s course in very warm temperatures. The good news is Glen seems to be handling the heat well. “I was proud of him this afternoon,” Clark said. “He was really bright and strong even in the arena at times, so that was nice to feel that the heat hadn’t taken it all out of him. We’ll know more when he jumps, but so far he’s doing well.”

As for how Clark, a native Texan who has spent the last three years based in England, is handing the heat: “I’m hot as hell. … I was looking forward to getting in the sun, but this is a little extreme!” We have to agree. It’s currently 89 degrees with the humidity pushing the real-feel temperature up to 93 degrees — Chinch is melting! 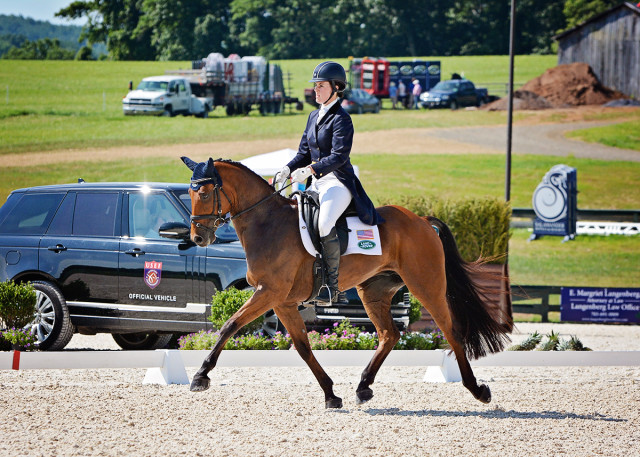 Maya Black and Doesn’t Play Fair delivered a personal best score of 41.4 to sit in second place after dressage. The 11-year-old Holsteiner gelding owned by Dawn and Jon Dofelmier can be a handful in the sandbox, but “Cody” and Maya continue to dial in their performance in this phase and did not disappoint today.

“Overall I was happy; he seemed settled in there, and that’s something that we’ve worked towards over the years. I know that he has a lot more experience now and I understand that, but it’s still nice to go to a new venue and be able to keep him under wraps because historically that used to be something we needed to practice,” Maya said.

“Otherwise he was really quite rideable. I was happy with the canter work. I felt like still at the beginning in the trot I could have had him a little bit more open in front in his neck, and that’s just something that’s going to come with me trusting him more over the years, but he just felt like maybe I could have him a little bit more lifted in his shoulders in the trot work. His canter work has come along a lot this spring so I was happy with that.”

Is Maya feeling more pressure this weekend as the traveling reserve member of the U.S. Olympic squad? “I feel like there are a few more opinions, maybe there are a few more people putting their two cents in, but otherwise no. I always just go in and try to do my best. It’s been a work in progress, but I feel like it’s going in the right direction now.” 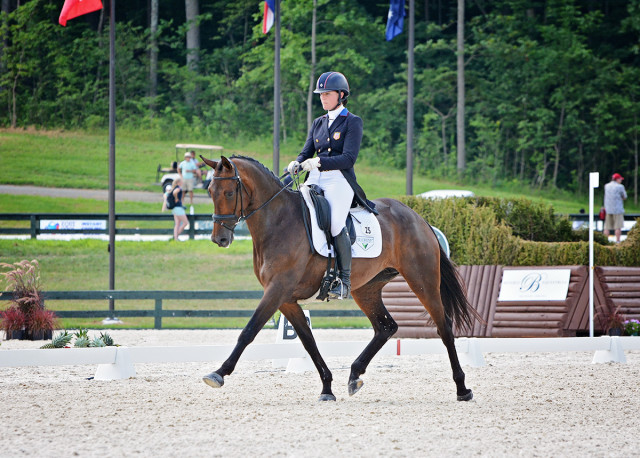 U.S. Olympic team members Lauren Kieffer and Team Rebecca’s Veronica scored 43.7 to round out the top three after the first phase, and that would have dipped lower had it not been for a few mistakes, like a break to canter during the medium trot. But Lauren said after the test that part of her strategy this weekend was to push for more with the 13-year-old Dutch mare.

“We were playing around with where we could maybe pick up some points in places or show her off more, and we had a couple of bobbles with that in mind, but that was the point of that: to play with it here, and then hopefully we’ll know what we’ve got when we get to the Games,” Lauren said.

“She feels really well. She just keeps getting stronger and stronger. She knows her job; she loves to compete, and she goes in the ring and gets pretty flippy with her toes. She’s pretty fun to sit on.” 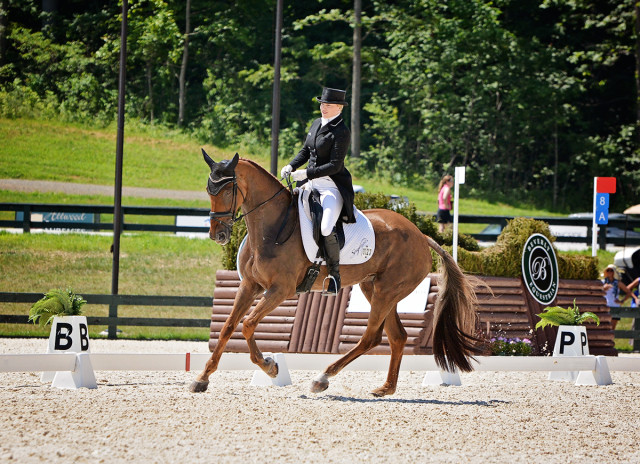 Looking to the rest of the leaderboard, Marilyn Little and RF Demeter scored 43.8 for fourth place, and Jessica Phoenix and Bentley’s Best scored 44.4 for fifth place, giving us five sub-45 dressage marks on the leaderboard. Phillip Dutton has all three of his rides in the top 11, with Fernhill Fugitive sitting tied for sixth on 47.2, his U.S. Olympic team mount Fernhill Cubalawn tied for eighth on 47.4 and Mighty Nice in 11th on 47.9.

Holly Payne Caravella and Santino scored 47.2 to tie for sixth place with Phillip and Fernhill Fugitive, and Emily Beshear and Shame on the Moon are sitting just behind them tied for eighth on 47.4. Boyd Martin and his Olympic ride Blackfoot Mystery put in what Boyd thought was the best test the horse has ever done, scoring 47.7 to round out the top 10 after dressage. That has the entire U.S. Olympic team sitting in the top 10. 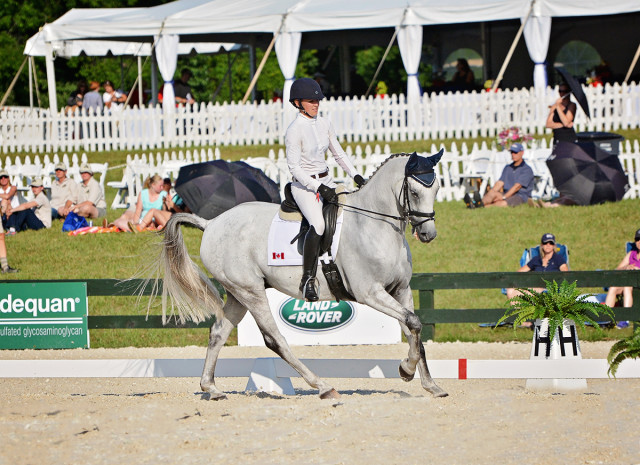 Jessica Phoenix and Bentley’s Best are the highest placed Canadian combination after dressage on 44.4 in fifth place, and Jodie Amos and Wise Crack are leading the way for the British team, scoring 49.0 for 13th place. Team USA leads the Nations Cup standings after dressage on 132.3, with Canada in second on 149.2 and Great Britain in third on 53.7.

We’re on a break now, and I think everyone is hoping temperatures cool slightly before show jumping starts at 5 p.m. EST. Despite the heat, the grounds have been packed all day, with spectators enjoying the shops in the Meadow Market, the delicious food vendors and the gorgeous VIP tent. The spectator stands are packed, and there is definitely a lot of atmosphere for this final outing for the U.S. Olympic team.

Be sure to check out EN’s Instagram for more photos from dressage, and scroll down for Samantha Clark’s video interviews with the riders. Remember you can watch show jumping live on USEF Network, and cross country will also stream live tomorrow starting at 9:30 a.m. EST. For inquiring minds, cross country will not run in reverse order tomorrow. Stay tuned for much more from #GMI2016. 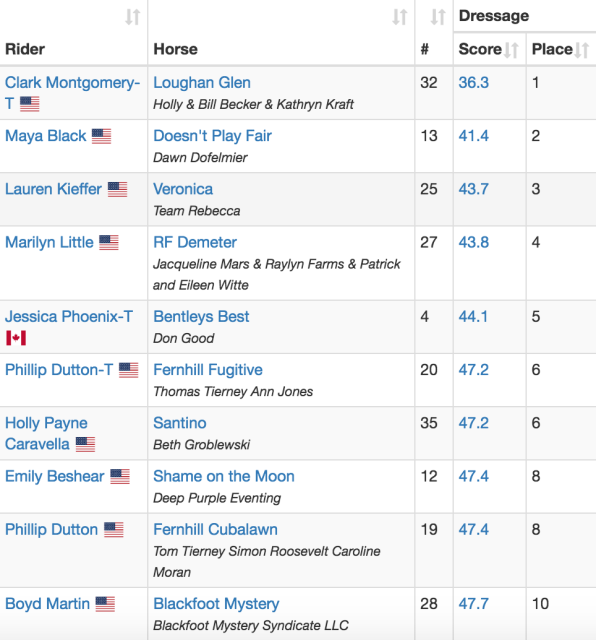