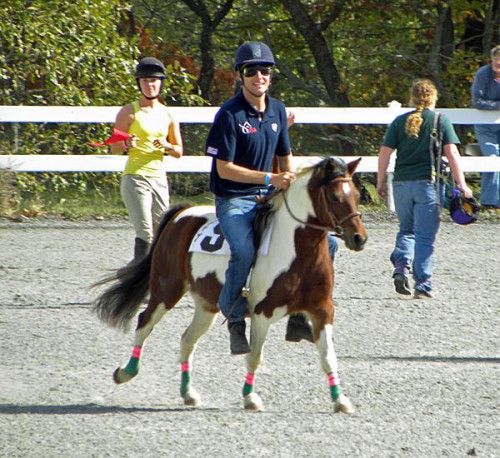 The near decade since this interview has been a wild ride for Boyd, who has since represented the U.S. at the 2012 and 2016 Olympics and was the top-placed rider at both the 2010 and 2014 WEG.  The wisdom he dispenses in this 2009 interview, however, is timeless, as is his sense of humor.

After a brief technical glitch, wherein John’s name was showing up as “Boyd” … 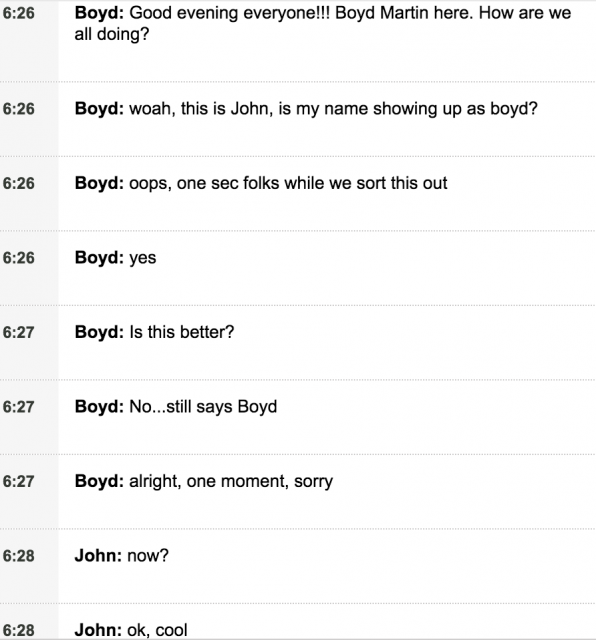 … it was full speed ahead. You can check out the original blog here, or enjoy the edited-for-length highlight reel below!

John: Alright, sorry about that, lets jump right in and talk about your big win at Fair Hill. You finished dressage on Neville Bardos in 16th, with a lot of big names in front of you. Did you think you could win Friday night, or when did you think you had a great shot at winning?

Boyd: When the heavens opened and it started pouring with rain and all of the overweight, shiny showponies started withdrawing before cross country.

John: Sweet, let me ask this, how did Neville feel in all that mud?

Boyd: He traveled across the mud on Saturday as softly and smoothly as Michael Jackson moonwalking.

Comment From Guest: How did you first meet Silva? (For you John, you owe me.)

John: Yeah, I need all the advice I can get in that department. So how did you land such a great catch?

Boyd: I had a broken leg at the time, long hair and no real direction in my life. Then I saw the light in the dark when this long legged, German supermodel-dressage rider landed in my backyard in Australia. John, you just have to treat ’em like a lady.

John: It’s amazing how you produce so many great horses. I remember you telling me about you really believe in taking the time to develop horses. You said you took about a year at each level with Neville and Thomas (Ying Yang Yo), could you talk the development process for a few moments?

Boyd: Johnny, the fastest way to produce a horse is to go slow.

John: Karen told me once that Phillip’s secret to making the time is that he can collect without slowing down. I can see that in your riding as well, so let me ask you, what is a pointer that can help riders at the lower levels make the time safely?

Boyd: Get rid of any bit that you’ve got that isn’t a snaffle and work on slowing the horse in front of the jump with everything but your hand.

Comment From lsa: We saw you do it at FHI, we see you do it so often, what is the key to safely making the time around really tough cross country courses?

Comment From yound and dumb: What advice does Boyd have for a young trainer trying to make it? How does he find owners and supporters?

Boyd: I’m still trying to work this out. This is a long, hard goal that everyone has but one thing is for sure, you have to work hard and be honest.

Comment From pizz: Was it cool to ride for the U.S. for the first time officially?

Boyd: It was wonderful knowing that I had the Stars and Stripes behind me.

Comment From Guest: Why did you come to the U.S. instead of England like most NZ’ers and Aussies?

Boyd: I think America in the sport of eventing is getting bigger and better every year and I felt that England is over-populated with too many riders … and all English people are a bunch of whingers.

Boyd: Non-alcoholic beer only, I can’t be trusted on the hard stuff.

Comment From LisaB: One Aussie in the entire universe that doesn’t drink, John?

John: For all you Pony Clubbers out there. Boyd’s secret to riding success is temperance and a great work ethic.

Comment From Terrey Hills Pub: Just a reminder, Boyd, you and your mates are still banned.

Boyd: Sounds like we’ve got a few Australian viewers online who know me from my old life.

John: Folks, theres noooooo way I can publish some of these comments, but for the record, they are hilarious

Comment From NZTB: Could you ride a NZ TB or would that be blasphemy?

Boyd: I’ve ridden plenty of NZ TBs. I especially like the Sir Tristam bloodline in NZ. Tough horses that are good jumpers (Ying Yang Yo).

Comment From LisaB: You seem to have quite a few young horses, how do you know they will be good eventers? What do you think is the key to a successful horse?

Boyd: I try and pick out good moving, rangy horses that have a good attitude and a good jump — it takes some time to work out if they’re the real thing.

Comment From Terrey Hills Pub: Hey Boyd — a mate of your called Craigie just rode a horse into the bar here. Says you lent him the frogman’s gear. Should we serve him? It’s only 10:17 am.

Boyd: Let Craigie have one beer, as it’s late in the day for him. Mongrel.

Comment From bucked naked: I’m curious what Boyd thinks of the short format CCI versus long format. It seems Neville would have been a great long format horse.

Boyd: Well it is what it is … there’s no use wondering about CCIs long or short. Nev’s won a long format two-star and now a short format three-star, a good horse is a good horse, good riding is good riding, the winner should still be the winner.

John: Your parents were both Olympians (Dad cross country skiing, and Mom speed skating I think), what would it mean to follow in their footsteps?

Boyd: I’m my own man, Johnny. I don’t think my Mom and Dad would mind if I was a busker down at the Circular Quay playing a guitar for spare change. I love what I do and I chose this path because it’s what I’m into (and not busking).

Comment From Circular Quay Buskers A$$: Stick to the ponies son. Your singing voice is dreadful.

Comment From Ginna: Boyd, you are a gentleman and a scholar.

Comment From Jen: For a young rider how would you recommend getting started in the horse industry?

Boyd: Honesty, integrity and the urge to ride any horse that comes your way despite its height, color and attitude.

John: You and Phillip both have scary good eyes. I have watched you jump thousands of jumps and you almost never miss. In a few sentences, what is the key to having a great eye.

Boyd: Well Johnny, I think that I probably jump 50,000 fences per year. Slowly but surely, it becomes subconscious, I suppose.

Comment From Auntie Jan: Oh Boyd I just want to say you are wonderful.

Boyd: Ohhh, Auntie Jan, what time is it there? Please don’t mention any of my childhood stories.

John: The power of the internet, bringing people together, incredible.

Comment From Kentucky Blue: Is it true you escaped from the ambulance after your fall at Rolex in 2008 and got back on Ying Yang Yao before the EMTs got to you?

John: I’ve heard this story a couple of times, you took a hard fall and it would be like you to try to hop right back on.

Boyd: To be perfectly honest, I don’t remember much from that day as I had a few head injuries but some call me a human pigeon … always looking to return back to my nest.

Comment From TG: Boyd, for daily riding, do you have a preferred bridle set up, and do you have anything unique for your own set up for working horses?

Boyd: Snaffle — keep it simple. The softest bit that the horse you’re riding will allow, no tricks, no gadgets. Just classical training.

Comment From Rugby Grey Horse: Can you tell us the backstory about Nev — what was he like as a young horse, how old was he when you got him, did he race and was he any good as a racehorse? When did you know he was a good jumper?

Boyd: I had a broken leg in nine places at the time and my good mate Gordan Bishop was trying a horse that a racehorse trainer was trying to ditch. Gordo didn’t think the horse had the ability but I liked the look in Nev’s eye. He was $500 and he came with his own headstall so I thought bugger it. I’ll take a chance, no vet check, no ride — I just took him. The first time that I took him out was a jumping day and I unloaded him off of the trailer and he took off for the hills. It took me two days to catch him and he still had his shipping boots on. I knew that he was a good jumper when he jumped the six foot wall in the round yard when I was trying to start him up.

Comment From Becca: Do you offer working student positions at your stable?

Boyd: The working students that go through the barn come out with hair on their chests … they’re ready for Afghanistan when I’m done with them.

Comment From TG: Have you ever worked with a horse that is ADD in cross country, but lovely in dressage and show jumping? If so, other than time what helped most?

Boyd: Well TG, you’ve got to get inside your horses head, get a feeling for what makes him tick. I recommend sleeping in his stall for a night or two. You’ve got to bond with him.

Comment From Becca: Do you think that listening to music while you ride is beneficial?

Boyd: The music I recommend is music like AC/DC, Nine Inch Nails and Nirvana to get yourself into a nice settled mood.

Comment From WI Girl: I know that in the months of November/December, a lot of event riders do gymnastics and dressage training to prepare for the winter show season. Is there anything as riders that we should work on especially?

Boyd: WI girl, keeping yourself mean … I like to keep myself mean in Nov/Dec. — running barefoot in the snow, riding dressage outside with no shirt on. It’s easy to fall into taking the easy road and sitting in front of the fire and not being out there training your horses.

John: Alright Boyd, I promised to only take an hour of your time and we are well past that now, its been a blast, is there anything you would like to say before we wrap up?

John: We would love to have you back Boyd, thanks for joining us and don’t be a stranger. Goodnight everyone, thanks for coming.