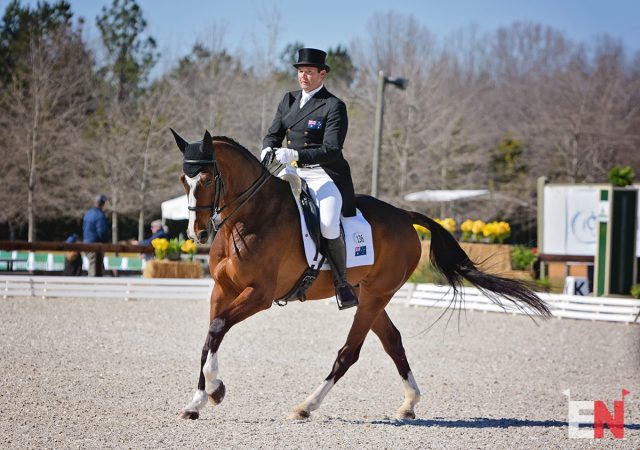 Clayton Fredericks and FE Bowman lead the CIC2* on 26.3 after the first day of dressage at the Cloud 11~Gavilan North LLC Carolina International in Raeford, North Carolina. The 10-year-old Wurttemberger he owns with Amanda Bernhard and Diana Crawford has been on his toes all week, and Clayton said he wasn’t quite sure how they would fare in the sandbox.

“In the arena familiarization this morning he was doing little spins, so he was pretty wired up. I wasn’t anticipating a really great score, but he really knows his job,” Clayton said. “He’s a very intelligent horse; sometimes I feel that’s a little bit to his detriment. He sees everything and he hears everything, and he’s very sensitive.”

“Bowie” is no stranger to competitive scores at the two-star level. He won the Red Hills CIC2* in 2016 before moving up to the CIC3* level at the Ocala Jockey Club, where he finished 11th. He recorded top five finishes in the CIC3* at both Chattahoochee Hills and Bromont last year before being sidelined by splint and foot injuries.

“I’ve made a conscious effort to slow up my competing in that I try not to run them so much,” Clayton said. “We’ve been doing a lot of show jumping, so hopefully that pays off tomorrow,” Clayton said. “I’m trying to get the horses ready for the CCIs without overly running them. It’s a little different with the young horses — you have to get them out to get them into the sport — but I have some upper-level horses that I really want to focus getting all the little bits right so I can get back to the top level again.”

Returning to the highest level of the sport has been at the forefront of Clayton’s mind since his tenure of coaching the Canadian eventing team ended following the 2016 Rio Olympics. He last represented his native Australia during the 2012 London Olympics. Prior to that, Clayton’s CV is peppered with top results: team silver at the 2008 Beijing Olympics, winner of Kentucky CCI4* in 2007, and individual silver and team bronze at the 2006 Aachen World Equestrian Games, to name a few highlights.

“No one was surprised that I found it difficult to be out of the sport personally, so I’m really enjoying it now,” Clayton said. “It was a freshener being away from it for a bit. Now I’m lucky enough to have some really nice horses.”

His immediate goal is to qualify for the 2018 World Equestrian Games at Tryon, and FE Bowman will aim for either Jersey Fresh CCI3* or Bromont CCI3* to secure his qualification. FE Ophelia, who was meant to compete at Carolina this week but developed an untimely stone bruise, will also aim for WEG qualification.

“I think the horses I have in the running could step up to the plate. It’s on the short end of the timeframe, but the horses that I have are good enough. It’s whether we can get a bit lucky with the qualification,” Clayton said. “If I go (to WEG), I’ll give it my all. If I don’t, I won’t be too devastated. Tokyo 2020 is a different matter. That’s a full-on push.” 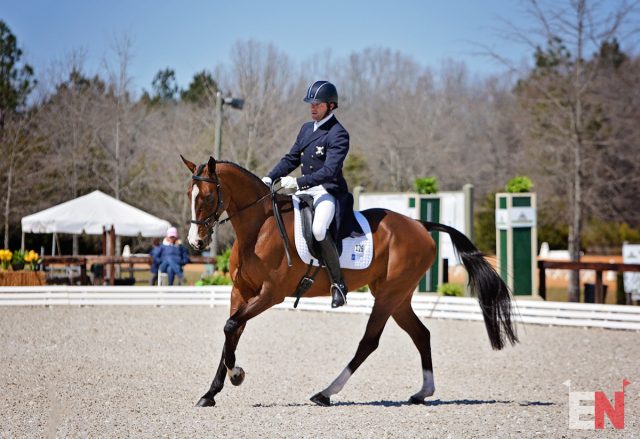 Looking to the rest of the CIC2* leaderboard, Will Faudree and Jennifer Mosing’s Caeleste, an 11-year-old Holsteiner mare, sits second on 27.4 in her first time back competing at international level since 2016. Katherine Coleman and her own Billy Bandit, a 10-year-old Anglo European gelding, sit third on 28.5. Click here to view full scores.

CIC2* dressage resumes at 8 a.m. EST tomorrow, followed by show jumping in the afternoon at 2 p.m. EST. All of CIC2* show jumping will stream live on EQSportsNet with commentary from Nicole Brown and Karen O’Connor. Click here for information on how to watch the live stream.

Leslie Law Lights Up the CIC1*

“He’s been quite of himself all week, so I was a little nervous he might be a little bit too up. By the time he went in, he settled just about the right amount, so I was able to ride a really forward, flowing test … and make the most of his talent and his exuberance,” Leslie said. “It was nice because I had lots of energy, but we got to the point where I could ride quite a bold test as well.”

This horse has been consistently dominant at the one-star level, having also finished second in the CCI1* at the Ocala Jockey Club last autumn. Leslie said he plans to step him up to Intermediate next, with a plan to aim for the CCI2* at Ocala to end the season.

Will Faudree and Sarah Pyne’s Quintessential, a 10-year-old Irish Sport Horse, sit second in the CIC1* on 25.6. This horse is also no stranger to wins at this level, having topped the leaderboard at the CIC1* at Plantation Field last autumn.

CIC1* dressage resumes at 8 a.m. EST tomorrow morning, followed by cross country at 1 p.m. EST. Click here to view full scores from the CIC1*. Click here to catch up on all of EN’s coverage from Carolina International so far. Go Eventing!