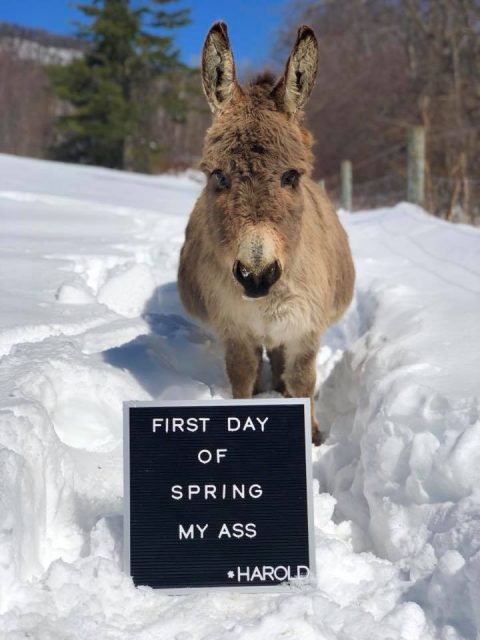 So, I rolled up at Carolina International yesterday, and looking out my truck window I see everyone is super bundled up and Jenni Autry is looking like she’s living in the damn tundra. I thought it was straight up balmy at 50 degrees, considering Virginia is still covered in snow, but all y’all snowbirds coming up from Florida were unhappily surprised to discover that it’s STILL kinda winter. Sorta. I mean it’s in the low 30’s overnight, which I’m excited about, but they’re devastated to experience. I’m gonna get my tan on today! Fifty degrees is tropical!

Sadly, this week we said goodbye to the incredible Thunder Gulch as he was euthanized due to complications of old age. In 1995, Thunder Gulch won the Kentucky Derby and the Belmont, and just missed out on the Triple Crown with a third place in the Preakness Stakes. He stood at stud at Coolmore America’s Ashford Stud since 1995, after retiring with a record of nine wins out of sixteen starts, and $2.9 million in winnings. He was 26. The Thoroughbred world will greatly miss him. [RIP Thunder Gulch]

An enormous equine seizure was conducted this week in Wicomico County, Maryland, after the discovery of what many are calling one of the worst cases of animal neglect in recent history. With 25 identifiable dead and decaying horses found on the property, and 100 of them barely alive in varying states of starvation, Barbara Pilchard’s 150-acre farm was discovered by a news helicopter last week. According to Wicomico County sheriff Mike Lewis in a Tuesday, March 20, 2018 press conference, law enforcement was familiar with the property and stated his officers had visited the address over 80 times in previous years for complaints about the horses being loose in neighbors’ yards, gardens, and in the roadway. [100 Horse Seized from Maryland Farm]

Galway Downs is probably the most famous event on the West Coast. Based in Temecula, California (Area VI) hosts four events a year: two horse trials that offer Intro through Intermediate levels in February and May, an international CIC3*/2*/1* in late March, and an international CCI3*/2*/1* and Training Three-Day in early November. Both international events also offer Novice through Preliminary horse trials. Galway Downs also hosts a Young Event Horse qualifier at their event in May. Galway Downs is a multi-use facility that hosts dressage and hunter/jumper competitions, one-day unrecognized horse trials, and offers cross-country schooling in a separate area of the property in addition to the USEA recognized events. [USEA Events A-Z: Galway Downs]

Schramm Sesh of the Week

Jimmie and Dom Schramm have teamed up with Kentucky Equine Research to provide an inside look into their conditioning program using KER ClockIt Sport. Each week we’ll share an example ride and some notes of what the Schramms look for as their horses progress.

“She is a great natural jumper,” Dom said. “However, she is still a little immature in her body. I do small gymnastic exercises to help strengthen her canter and work on basics like balance and straightness.”

“This work consisted of adjusting the canter over small raised poles, then adding small crossrails and a bounce, and culminating in adding them together with a gymnastic line to finish,” Dom explained.

Check back next week for another Schramm Sesh! Want to gain insight into your horse’s fitness? Try KER ClockIt Sport. The free app helps take the guesswork out of equine fitness by monitoring heart rate, speed, distance and altitude during rides. EN’s guides to the app explain all the details: 7 Reasons to Download KER ClockIt Sport and How To Get the Most Out of KER ClockIt Sport.