Looking out on course at the Dublin Horse Show. Photo courtesy of Emily Nash.

It was pure coincidence that the historic Dublin Horse Show was set to begin that day after I arrived in Dublin for vacation. Really and truly coincidence. That didn’t keep me from enjoying this world-renowned event to the fullest. The Royal Dublin Society is an absolutely incredible venue. Beautiful main arena, with countless other competition and warmup arenas, beautiful stone stabling, and don’t get me started on the shopping (eat your heart out Land Rover Kentucky!). 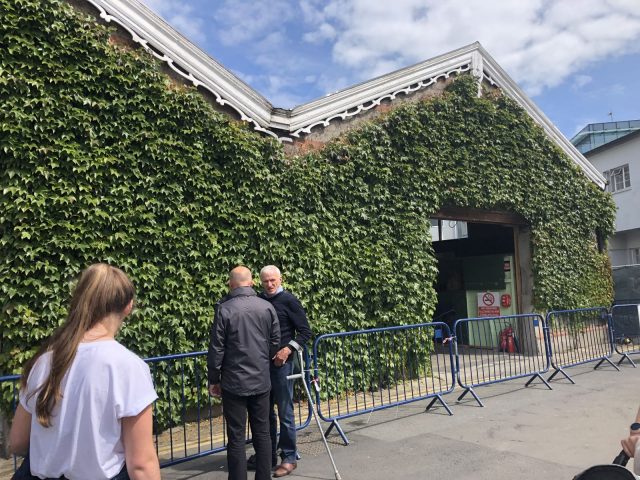 On Friday, I was lucky enough to attend a master class with none other than Sir Mark Todd. Todd also judged the Young Event Horse Series (YES) classes the day prior. The masterclass was well-attended and, in true Irish fashion, included a few rain showers. This didn’t slow our clinician down as he donned another coat and an umbrella and kept at it. 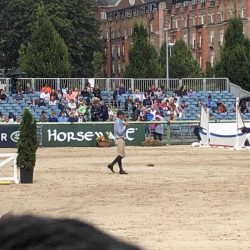 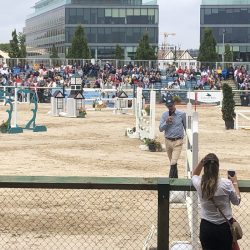 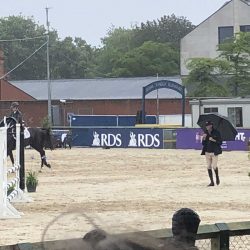 Todd started the one-hour masterclass with a brief discussion of the key components of event riding: rhythm, balance, control, accuracy and obedience. The lesson focused on exercises to build cross country skills, especially for the young horse, in an arena. The warmup on the flat was heavily emphasized, even within such a short time frame. He emphasized the importance of transitions in the flat warmup to really get the horse working forward from the leg to the hand. If the horse is resistant, then just keep repeating until they relax.

At the canter, the riders were asked to perform transitions within the canter in two-point. He had riders utilize circles when they needed help balancing the canter. In the downward transitions he asked riders to, first, add leg, then sit up and finally close the hand (if needed). He wanted to make it clear that adding leg prior to the downward is vital to keep the horse forward and balanced.

The jumping portion started with a focus on straightness and starting to build in skills needed later on in the lesson. Riders started with a low bounce and then circling over a vertical constructed from three skinny panels.

Derwin’s horse Fernhill Candy Crush had a tendency to get a little long in front and take the reins, which Todd harped on a little bit, asking her to really focus on keeping him up in the front and not allow him to snatch the reins. Later on, he suggested landing from a fence and thinking that you had a 1.60m oxer three strides ahead so you have to sit up and ride right away. He also suggested that the rider be diligent about always doing a well-planned downward transition after completing an exercise.

Riders then worked on some skinnier fences. The vertical from the previous exercise was slowly made narrower by removing panels. A barrel was also placed on the other end of the arena which the riders were asked to trot. Todd’s theory on skinny fences was to always build confidence in training by making the jumps skinnier gradually, keep the height a little lower, and trotting skinny fences when the horse is still learning. Trotting gives the horse more time to assess the situation and the rider more time to funnel the horse over the fence. He stated that it’s always better to build confidence in the beginning rather than making it too difficult and creating a problem you have to fix.

After this brief warmup and schooling the skinny fences, the riders worked on jumping a two-stride angled line. Todd re-emphasized the importance of straightness on this line, though both horses jumped through beautifully the first time.

Next up was a coffin-type exercise using a water tray with jumps one-stride on either side. The jumps were kept as poles to start, just to make sure the horses felt confident prior to bumping up the height. Todd took this opportunity to discuss cross country position. He reminded riders to have a “strong cross country position” with their weight in the saddle and their leg on going into the coffin exercise the first time, in case the horses looked at the water tray. He also suggested giving the horse a bump with your spur around the corner to let them know something new was coming.

After this, riders put a few lines together, adding the skinny, coffin exercise and two-stride line together with a few bending lines and a corner. The riders and horses made it look easy! Todd commented that part of the reason they made it look so easy was that they kept their horses in such a lovely rhythm all the way around.

Throughout the course work, Todd offered encouragement and some more words of wisdom for the audience:

Overall, it was an incredible experience. The riders and horses did a lovely job and really showed off the quality training and breeding in Ireland. One of the most interesting observations I made was the Dublin Horse Show seemed to welcome spectators from all around the country, both equestrians and otherwise. The whole event was really geared towards the general public, obvious from some of the vendors and the classes offered. If you ever have the chance to attend the Dublin Horse Show at the Royal Dublin Society in Dublin, I encourage you to do so! 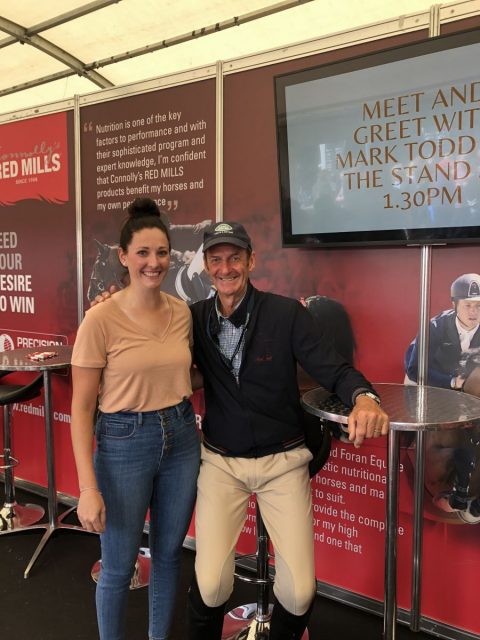