There’s a fine line between healthy respect and weak-in-the-knees fear, and it’s one that East Tennessee area eventing trainer Erika Adams found herself negotiating at a recent clinic with George Morris. She and fellow eventer Katherine McDonough kindly recounted the experience for EN. Remember to send your own clinic reports to [email protected]. 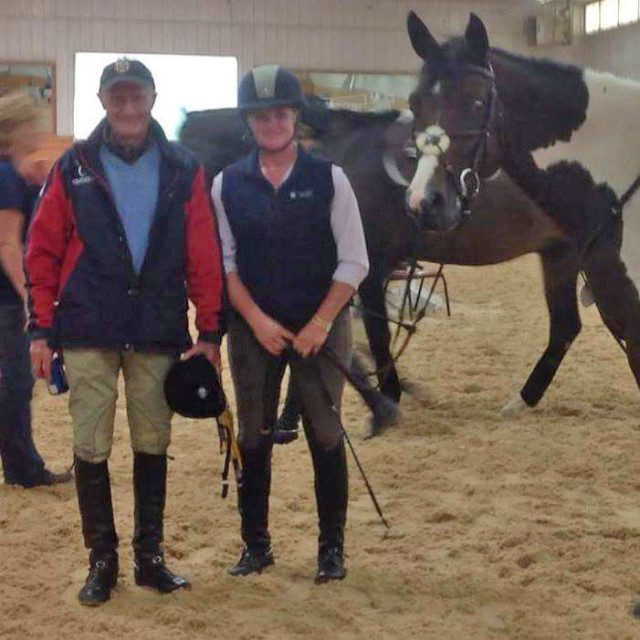 When my friend/owner Lisha Marshall surprised me with a confirmed spot in a three-day clinic with The Master at the American Trakehner Association (ATA) Convention at Majestic Farm in Batavia, Ohio, I expressed my excitement.

But when I got off of the phone, I promptly sat in a corner, began rocking back and forth muttering things like supple leather and “new hairnet and pearls” and “I need to lose 10 pounds in the next two weeks” and “I’m an eventer, what is she thinking? I’m an eventer! He’s going to chew me up and spit me out!”

As the clinic drew nearer, my stomach ulcer grew larger. Turns out losing those 10 pounds wasn’t going to be that hard! Any time someone asked me about the clinic, I would dry heave nerves and cry. Why was this happening to me? What did I do to deserve this? George Morris hates eventers. And I’ll be riding a pinto mare, not a plain bay!” But there was no turning back. Rainbow Sky and I were going.

My anxiety came to a head as I was about to mount for my first lesson. I suddenly realized that the whip I brought was my solid and sturdy but BLUE cross-country whip. It wasn’t black. It wasn’t brown. It was blue.

But I knew that going in without spurs and a whip was a serious offense. So going in with a blue whip was better than going in without one at all. I took my chances and headed to the ring as polished and poised as possible. Shirt tucked in. No bright colors. Eyes straight ahead.

The Master had my fellow riders and me do a short, basic walk, trot, canter warm-up on the flat. It wasn’t 10 minutes before he called my pinto mare and me into the center of the ring. How have I screwed this up already?! He told me to get off so that he could get on Sky. Sir, yes sir.

As I was getting off, The Master shared a memory of his childhood with me. The first horse he ever loved was a pinto mare. This glimpse into the man’s humanity loosened the knot in my stomach ever so slightly. As we continued adjusting the tack, I hid my blue whip behind my back. I can’t give The Master a blue whip. He’ll forget that he loves pinto mares.

Adjustments made, he turned to me with a sharp expression holding out his hand, expectantly. A blue whip is better than no whip. Feeling the knot tighten again, I handed my whip to him. He looked at it, turned around to the audience, held it up and proclaimed, “Now THIS is a whip!”

From that point on, I knew that I had been looking at this opportunity from the wrong perspective. I looked around at the other riders in my group — hunters, jumpers, fellow eventers. It wasn’t all about the superficial things that petrified me about the clinic. It wasn’t about this grouchy, mean, old man saying ugly things to you for sport. It was about the importance of the counter canter. It was about how neatness counts. It was about horsemanship. It was about learning from a Living Legend. Good and Bad. 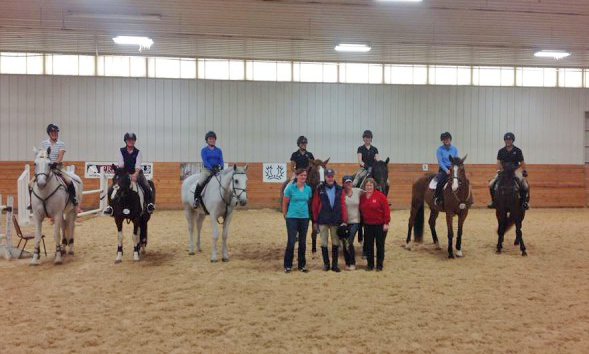 With a space about the size of a standard dressage arena, George Morris created interesting exercises that kept the seven riders in my group challenged and at attention. He emphasized position, such as the importance of the placement of your foot in the stirrup to allow for a secure leg. He explained that the reason for having a straight line from your elbow to the bit is not just for a pretty profile picture. But that it is instrumental for correct connection.

He reminded me why riding without stirrups is not a punishment, but rather, vital in the strengthening and condition of the rider’s seat, leg and balance. He demonstrated how more time spent strengthening the counter canter leads to a stronger canter. And how a good, clean lead change is necessary for the balance of a canter through a course (guilty).

Not only did he tell us these things, but the man demonstrated them. He rode at least two horses in each lesson he taught, showing us that the bar he set was indeed attainable. And not only was it attainable, he improved every horse he sat on, including Sky.

At the end of the third day, the amount of improvement I felt on Sky was remarkable. Sky is an efficient jumper. She does exactly what she needs to do to get the job done. But in doing that, she compromises her body to be efficient. After George Morris got ahold of her, she started jumping with more power and was straighter and rounder. And this revelation was not limited to just me. Every rider in my group walked away with a stronger position on a horse with a more refined jump than when they began.

Yeah, George Morris has a reputation for being a fanatic disciplinarian when it comes to appearance, tack and position. But having spent three days with him, I have to say, he’s not entirely out of line. Yes, he very clearly calls you out when you’re wrong. But the thing is, he’s rarely wrong about it.

And, what nobody talks about is that when you’re right, he is quick to point that out and praise you for your job well done. And while I don’t think a bright pink polo shirt is going to make or break your career, I agree that neatness counts (I’m polishing my spurs as I type).

And perhaps the most important concept I came away with after this experience is that his principles transcend all jumping disciplines. It doesn’t matter if you’re cantering into a combination on cross country, heading into a jump off or gearing up for the Maclays. The way you jump a horse is the way you jump a horse. While the disciplines are different, the fundamentals aren’t. Spoiler alert: George Morris knows his stuff.

And P.S. He didn’t call anyone fat.