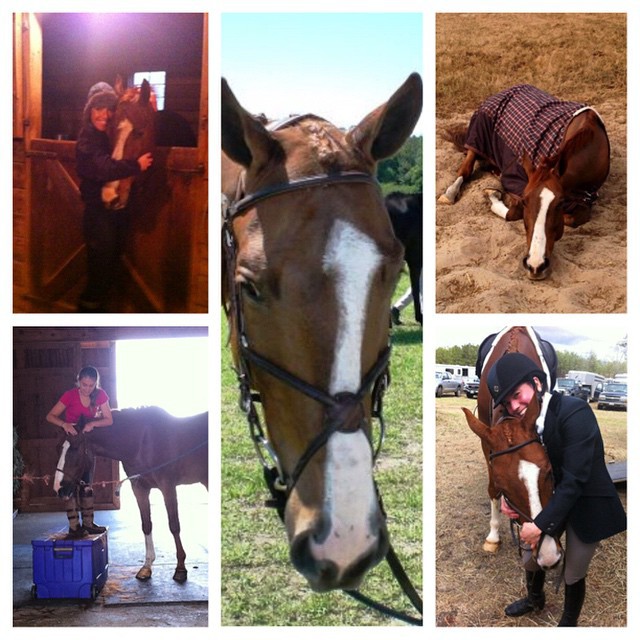 Laine Ashker begun her new year in the most tragic of ways, bidding an untimely farewell to Seajack, her 2006 homebred gelding who suffered an aneurysm yesterday.

Sired by Aberjack, Seajack took Laine through the two-star level and competed at the lower levels with other riders. Most recently, Seajack was campaigning with Louis Rogers at Training level, earning several top 10 placings over the last few years.

Seajack was one of Laine’s first homebred horses, and she told us today that she was thankful to have been able to be there for him “from when he was born until his last breath.”

Laine’s longtime friend, Bronwyn Watts, posted a lovely tribute to the gelding on Laine’s Facebook page last night, so we’ll let her words do the talking as she explains Seajack’s life as a “boomerang” horse:

“No matter how many times Lainey sold him or leased him out, he always came back into her life; this went on for years and years. That goofy chestnut gelding with a huge head and goofy brain always made his sneaky way back into Laine’s barn. It became a joke between Lainey and I, as we had just laughed about it a few weeks ago …

“Although he was a brat, he was a giant sweetheart who only ever wanted you to pull on his ears and shake his head as to squeeze his lil’ pea brain out — no really, he loved every bit of it!

“At Buck’s barn in Florida, it was a daily ritual to hear Lainey or I yelling at Seajack to stop biting, pawing, tearing stuff down and just wanting any little bit of attention — good or bad — he could get. He had a personality the size of Texas and a heart of gold! Lainey was there when he was born on their farm in Virginia and was there till his last ounce of air.”