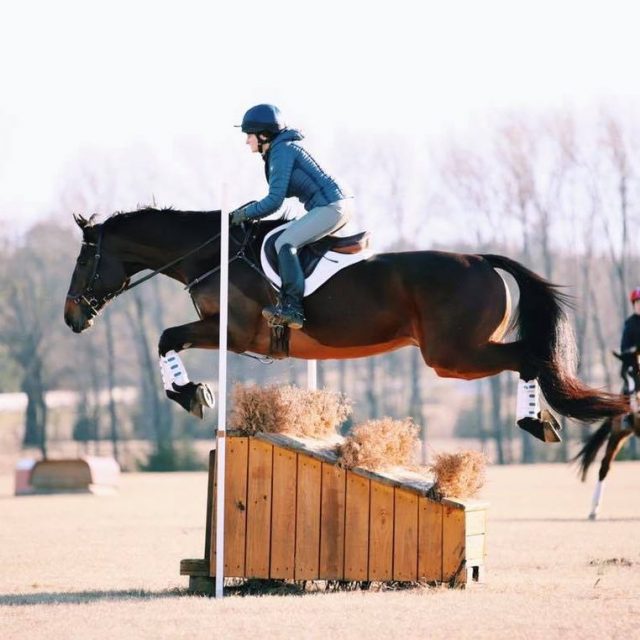 It was a frozen, chilly weekend that welcomed Boyd Martin back to Texas Rose Horse Park in Tyler, Texas, for a waiting-list-only clinic in Area V. In spite of the wickedly cold temps, a good number of auditors as well as riders showed up to watch the very likable Boyd instruct riders on the ins and outs of show jumping and cross country.

Several of the riders were on new horses and a few were tuning up in anticipation of a trip to Florida, but the real question of the weekend was whether or not Boyd would get run over on cross country like he did last year — cue viral video. Boyd even joked that when he sees a horse coming his way in Texas he’s a little like an abused stepchild waiting to get hit. (And just for the record Jill Treece and her OTTB Zenaria more than redeemed themselves by being one of the rock star teams of the weekend.) 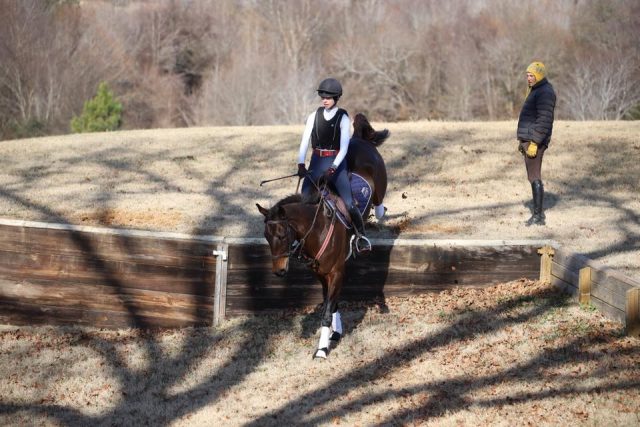 Jill Treece successfully negotiates the down bank while Boyd looks on. Photo by Remy Treece.

All kidding aside, one of the best things about the clinic were all the little reminders about eyes, position, shoulders and straightness that we all know but tend to forget. Sprinkled with little bits of sports psychology thrown in here and there and spoken with a smile and an Australian accent, it made for a great way to start the year in training.

The first day of the two-day clinic was all about show jumping. Riders attending ranged in level from Beginner Novice to Intermediate and for the most part did the same fences and grids regardless of group with only the height of the jumps being adjusted. Each group started with a really awesome exercise involving two low cavalettis set at such a distance that they could be negotiated with either a bounce, one stride or two strides in between depending on the shortness of the canter.

Once that grid was successfully completed at each distance, two more of the same grid were set up to form a “y.” Riders then went through the entire grid with Boyd determining what stride he wanted them to get in between cavalettis and grids.  It was an extremely useful exercise in teaching adjustability, regardless of the size or competition level of the horse. 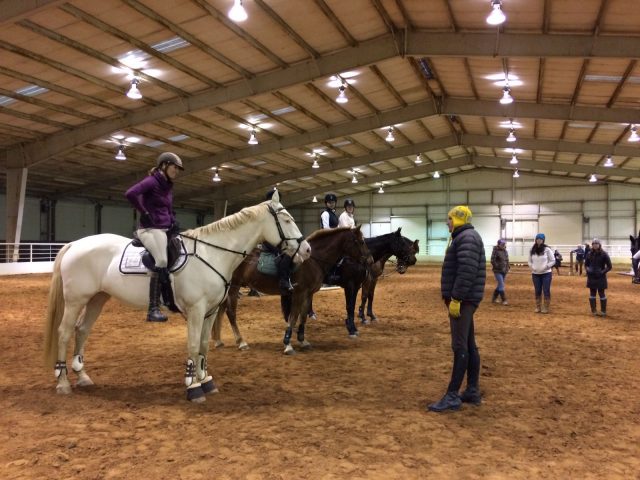 Each two-hour lesson continued with a figure-eight exercise that focused on turns and accuracy and then finished up with some coursework. Throughout each show jumping lesson Boyd reminded riders of the importance of keeping their shoulders square and how to use their upper bodies to shorten and lengthen the strides of their horses. Leaning forward creates a longer stride; sitting up straight creates a shorter stride. Remembering this idea was particularly useful when cantering through the first grid.

Boyd took a moment with each group of riders, which ranged in number from four to six, to talk about getting out of your head and the ability to live in the moment when you’re on course. So many of us hit a rail or have a refusal or whatever the mistake is, sometimes something as simple as the wrong lead, and it throws everything off and affects the way we move forward to the next fence. He made the very valid point to just get over it and move on. The time to worry about and analyze the mistake is after the course is done, not while you’re in the thick of it. For an overthinking adult amateur like me, this advice was priceless. It’s actually good advice for life as well!

Sunday was the day all eventers live for: cross country day! The cold stuck around, but the sun was shining, and one group was even treated to the sight of a family of bald eagles circling as they jumped. The Brunsons do a fantastic job of keeping their championship course at Texas Rose in competition shape all year. Because of this riders were able to practice corners, skinnys, Trakehners and banks. The water might have been chilly, but teams jumped in and through it as well. 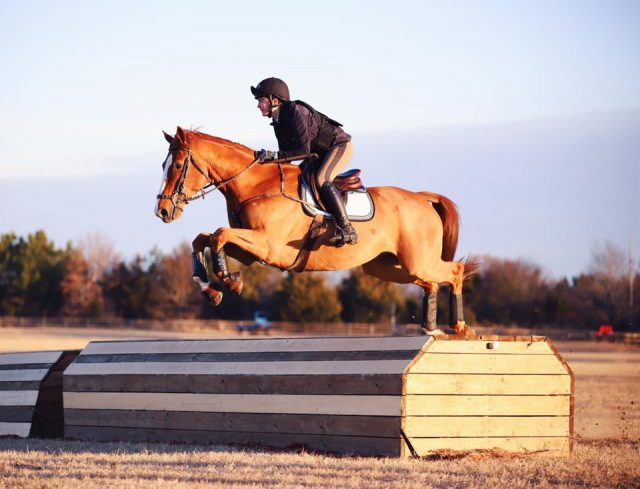 After a brief pep talk from Boyd about the differences in show jumping versus cross country jumping, riders got right to it. He again stressed the importance of position, particularly when you need to be a little more behind rather than forward. This idea was particularly evident over the ditch, which gave a quite a few riders trouble. Martin’s approach to it was different than what I had seen in the past. He wanted riders to canter very boldly to it, riding strong. Once the horse successfully got over, then the rider would gradually slow the tempo down allowing the horse to look. It was a very good way to combat the horse’s fear of the unknown element of the ditch. At the end of the day every horse and rider team had successfully gone back and forth over the ditch with no issues.

While I would have preferred to ride (just couldn’t quite swing it this time around) I am so thankful I got to audit this clinic. Boyd is a super teacher, fun to watch and listen to. He was kind when he needed to be but not afraid to push riders who were ready to be pushed. His advice is relevant and spot on. But of course, the real true treat of each day were the times he actually got on a horse. I highly recommend riding with Boyd Martin if you get the chance. I know the next time he comes to Texas, I will!