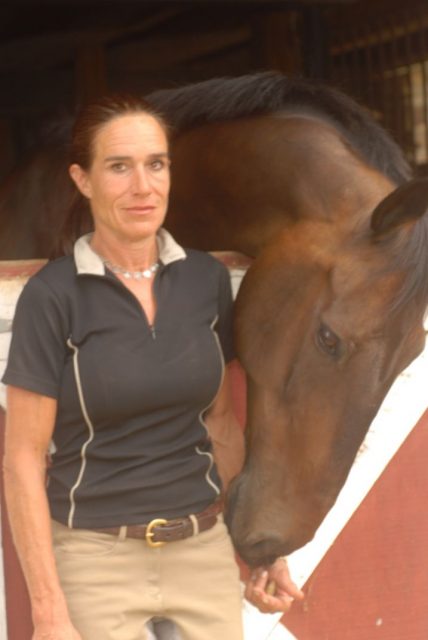 I’ve been writing poems as long as I’ve been riding — nearly all my life. There’s a faded photo of me around the age of 5, in a pink tutu aboard my father’s horse, named appropriately Big Horse, for his giant size, a young version of my father holding the reins from the ground. I am beaming. Writing poems came a little after my introduction to the piano, which I played through my gawky teen years, grinding out scales and lessons and recitals.

I have my mother to thank for this early passion. But it was my father who turned my attention to words, marking in his precious early editions his favorite poems of Wordsworth, Coleridge, Keats, Byron, Shelley, Tennyson—poems he thought my young mind would take to. I feel lucky in that my earliest endeavors in the arts, as well as my love of horses, have lasted throughout my lifetime, and still light me up to this day. Poems and the piano and horses define me.

In my middle years, I grew away from the piano. A quarter of a century flew by, of horse trial after horse trial after horse trial. I completed my first beginner novice at 39, and the Fair Hill Four-Star at 50. Five years later, Mara Dupuy coached me in the dressage warm-up at the Bromont Three Star, advising me to keep my hands close to the horse’s withers, as if I were playing the piano. This was something I knew how to do. Soon after, I returned to music. How to balance such three diverse passions has been my struggle for the last decade—how to make enough time for each without letting anything slide in one or the other or elsewhere in my life. Secretly I always hoped for some grand force to unify my smoldering heart. 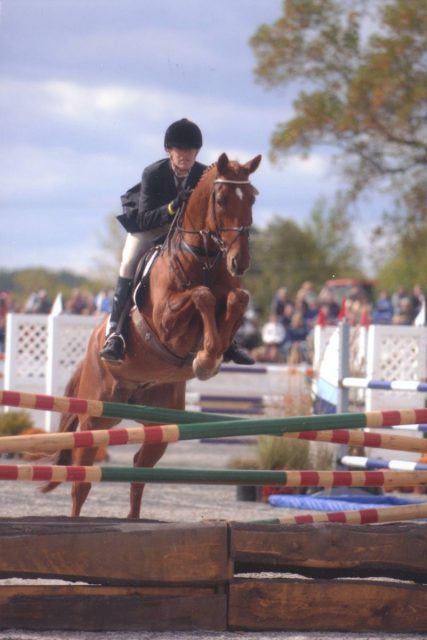 In 2016, I turned to the video poem, which gave my work new dimension by including a piece of music that I played, as well as a visual element, along with a poem. I played Bach, I played George Winston, I played Scriabin and the Beatles. I wrote poems and used poems of friends, and photos taken by family and friends, and even experimented with the camera myself. I didn’t just wear a GoPro when I rode, I wore it at the keyboard, too, photographing my hands as they played. Or I threw pages of music off the deck balcony, filming them as they scattered and fell for a video poem called “The Art of Falling.”

For years I had known of Susan Graham White. Occasionally, she was my dressage judge at horse trials, parceling out my 5’s and 6’s and 7’s, and sometimes I would brush up against her at FEI events in which she was a member of the ground jury. My horse and I always seemed to be at the top of their clipboard for one offense or another, but I respected Susan as an authority figure and as someone who knew a lot more about dressage than I did. 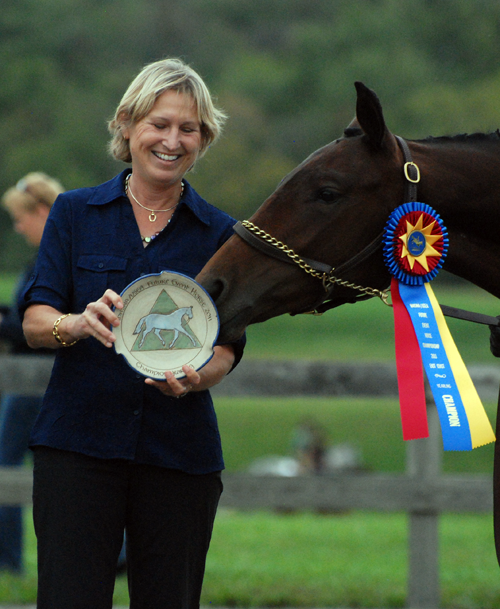 One day I took my four-star hopeful, Cavendish, to Susan’s farm in southern Maryland for a lesson. Cavendish had a penchant for running off with me, much like Big Horse did with my father, even in the dressage ring, if things weren’t going his way, or if my noisy hands and unbalanced seat in any way scared him. I liked Susan’s quiet, precise way in the lesson.

We talked. I learned, surprisingly, that Susan is not only a well-reputed dressage judge, but also an accomplished dressage rider as well, and—more surprisingly—a singer and songwriter to add to her list of talents, with a number of recorded CD’s, including Lost Art, Sounding Land, Show a Little Heart Rescue. As a musician, she has received many accolades including the Washington Area Music Association’s Songwriter of the Year, two Maryland Governor’s awards for songwriting and vocal excellence. As a horsewoman, she has ridden through top levels of dressage, and she is a licensed FEI “I” Eventing Judge, USEF “R” Dressage Judge and USEF “R” Dressage Sport Horse Breeding Judge.

I had never known another artist in the horse world before, besides myself. Susan said she thought we were kindred spirits, which I took as an enormous compliment, in our mutual struggles to balance our horse and artistic worlds. As I was cooling out Calvin, she ran to the house and returned with one of her CD’s, Sounding Land, which I listened to on the way home, and to every destination for the next few months. I started singing her songs in my head and altering them as I went. We are poets, we are dreamers, we are dressage riders.

One of three elements—music, poetry, or pictures—usually inspires the other two in the forming of my video poems. Sometimes I first write a poem, sometimes, I hear a piece of music I want to learn, and sometimes I see an image that moves me. Sometime in 2017, I hatched another collaborative idea. I had been listening to the British folk-rock singer, Sandy Denny’s work. I became obsessed with the fresh melancholy of her songs before she died at the age of 31 from complications after falling down a flight of stairs.

Aside from being a member of the band, Fairport Convention and later Fotheringay, she has a number of solo albums, including, The North Star Grassman and the Ravens, Sandy, Like an Old Fashioned Waltz, and Rendezvous. But she is probably best known for her single, “Who Knows Where the Time Goes,” that was covered by Judy Collins, Eva Cassidy, Nina Simone, and others. One cannot help but long for all the songs that were never written, the horses never ridden. 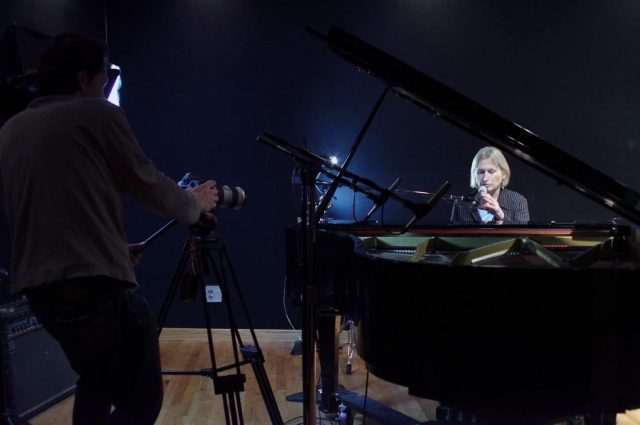 In my mind’s ear, I heard Susan’s husky, melodic alto singing ”Who Knows Where the Time Goes.”  I emailed her and got a quick reply. Yes, she would be interested in making a video poem. She had always loved that piece and had admired my poems, but would I mind if she handled the music and recorded it in the studio, while I wrote the accompanying poem? The pressure was on. I felt as though I were going down center line again, with Susan as judge. How could my poetry possibly live up to her music? To date, I had been recording at my piano on Garage band, and often enough, using my iPhone as camera. Now we would be using a professional studio. There would be tripods. Cameras that also weren’t phones. little trolley tracks to steady the moment.

Susan did a rough mix, I wrote a rough draft. She brought in pianist Jon Carroll, I wrote the next draft, and the next. I had never made a movie before, so I hired my husband’s videographer, Anniebelle Quattlebaum, to help me.  All I needed was a young version of myself to make the film work. I phoned my daughter. “No, Mom, I don’t want to be you.”

When in doubt, go to the barn. I trotted over to Caitlin Silliman’s winter quarters in Aiken, a long barn at a polo farm where she and three working students trained several head in eventing. Her student, Anna Fortier, kindly offered to be me in my twenties.

Susan sent what I thought was a final mix of the song. I wrote yet another draft of the poem. And another. We finished the video. All systems were go—until I got another email from Susan. Would I mind if she added some cello to the 3rd verse? Apparently, she had been fiddling with her drafts, too. Sure, I said, I love the cello. Why not give the piece even more resonance?

As with three-day eventing, my video poem projects are a marriage of efforts and energy. Three phases—dressage, cross country, and show jumping—the poem, the music, the visual. “Life is all about balance,” my father used to say. And he was right. Dressage offers the building blocks for any good show jumping or cross country effort. The music and poem are intertwined, while the visual focuses our interest. Multiple senses are at work. As they are when riding.

The building blocks of an artistic project are not dissimilar to the building blocks in dressage. The shoulder in leads to the half pass; the counter canter to the flying change, the piano and voice lead to a little cello thrown in. Things get inspired and learned and built slowly. What counts takes a long, long time to finish, far longer than your imagining of it. And you don’t always know what you have and want until you start making it, until you start training the horse and he begins to blossom. I wrote another draft, wondering if the poem would ever be finished.

That dressage test can always become more finely tuned. As Leonardo da Vinci wondered at the end of his life, “Di mi se mai fu fatto alcuna cosa”, “Tell me if anything ever was done.” There is no possible way for a rider to score 100 % on a dressage test. Art is art by the very virtue of its imperfection and incompleteness. And still, I want to get back on the horse in my tutu, no matter my age. That initial childlike enthusiasm is why I write poems, why we make art, what keeps us in the tack.