Great Meadow International hosted a press conference with the U.S. Olympic team and Coach David O’Connor this afternoon to introduce members of major media outlets in nearby Washington, D.C. to the sport of eventing.

Team USA — Phillip Dutton, Lauren Kieffer, Boyd Martin and Clark Montgomery — answered the typical questions you’d expect to hear in a general press conference: queries about their horses and what it means to them personally to compete at the Olympic Games.

I was more curious about the strategy of how Team USA is preparing ahead of Rio. For example, Clark Montgomery’s mount Loughan Glen has already logged thousands of miles traveling from his base in England to compete in the mandatory team outing at Great Meadow this weekend, and that number is only going to keep ticking up as the team next heads to Ocala, Florida for training camp before shipping out of Miami at the end of the month.

What is the strategy behind having Clark and Glen come to the U.S.? Why is the final team training camp behind held in Ocala? Why are the horses shipping out of Miami? Coach David O’Connor answered those questions and more for EN following the press conference.

“Knowing that we could control the footing at the venue to provide good conditions for (Loughan Glen’s) last run was also important. The horse has traveled really well. He might go down early for the Florida training camp a few days early so we can split the travel up a bit more for him, but so far the horse has traveled quite well and looks quite good. He looks like he’s come through well so far.” 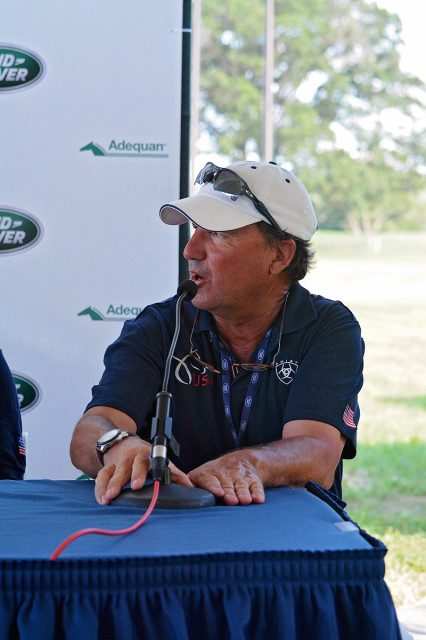 Hosting the final team training camp in Ocala follows the same strategy the U.S. used prior to competing in the 2007 Pan American Games in Rio de Janeiro, where the team won a gold medal and Phillip Dutton took individual silver with TruLuck. The U.S. team horses also flew out of Miami for the 2007 Pan Ams.

“I think going out of Miami is an easier flight for the horses than going from New York. That said, I didn’t want to put them on a truck from Virginia to Miami and then have them fly out right away. We’re splitting up the travel by having them spend six days in Florida for training camp,” David said.

“Though that sounds funny to hold training camp in Florida in the summer, the weather is actually not any different than it is right now in Virginia. The difference is it rains four times a week in the afternoon, which means the footing is great. We used that in our preparation in 2007 (for the Pan Ams), and I think that really worked. We’re replicating that again because I think the horses really liked it.”

As for the strategy of giving the team plenty of time ahead of Rio to build a camaraderie, how is that going? “This is a fun group, and they get along really well. Sometimes personalities don’t mesh as well on a team, but this group gets along,” David said.

Keep it locked on EN for much more from Team USA, as well as the other riders who have the honor of competing in the inaugural Nations Cup leg on U.S. soil. The good news is conditions are expected to improve a bit tomorrow, with Weather.com forecasting slightly lower temperatures and humidity, but it’s still going to be hot hot hot.

If you’re just tuning in to EN, be sure to check out our full report from the first horse inspection, as well as Samantha Clark’s beautiful photo gallery. Dressage starts at 8 a.m. EST tomorrow, and you can find ride times at this link courtesy of the one and only Steve Symansky. As always, you can see more photos on EN’s Instagram, and don’t forget you can watch live on USEF Network.