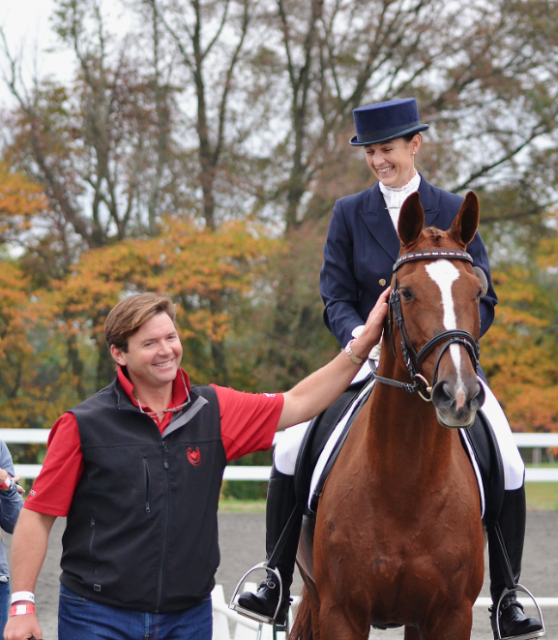 Colleen Loach and Freespirit snuck in to win The Fork CIC2* after quietly stalking the leaders all weekend, turning in a quick trip across Tremaine Cooper’s course with just .8 time penalties to finish on 56.4. Emily Beshear and Shame on the Moon, who led through the first two phases, picked up 10 time penalties to finish second on 57.3, and Ariel Grald and LBF O’Leagh’s Image — coming off a big win in the Carolina International CIC2* two weeks ago — were the only pair to make the time to finish in third place on 59.4.

“The dressage can be a little bit difficult with her because she can get tense,” Colleen said. “She was actually really tense in warmup, but she relaxed enough in the ring. Considering how tense she was in warmup, I was happy with the test.” Freepsirit scored 55.6 to tie them for ninth place going into show jumping, which Colleen said is always a fun phase with this mare: “She is amazing to jump. She’s really keen and eager and forward.” June jumped double clear to move up to equal sixth before cross country, which Colleen said the mare handled beautifully. “She’s really confident at this level now, and she answered all the questions easily.”

Colleen dropped “June,” an 8-year-old Hanoverian/Thoroughbred mare owned by Peter Barry, back to the Intermediate level for The Fork after struggling with a move up to Advanced earlier this season. After being very confirmed at the two-star level — this pair finished third in the Dutta Corp Fair Hill International CCI2* last fall — Colleen aimed for a move up to Advanced at Pine Top in February. After two stops on cross country, she tried again at Red Hills only to end up retiring at the corner complex in the main arena.

“Moving up the levels and all the way through Intermediate was always easy enough for her,” Colleen said. “She trusted me, and I think she still trusts me. I think the problem with going Advanced was just my lack of experience, since I haven’t gone Advanced in years. I thought going Advanced meant I had to go faster, so I didn’t take her back enough before the fences, and she didn’t have time to read the questions to figure out what she was supposed to do.”

With another good two-star result on their record and the mare feeling confident again, Colleen will stick to her plan to aim June at the Bromont CCI2* this summer, as she thinks the challenging track will help when she does try to move back up to Advanced. If all goes well at Bromont, she’ll shoot to try Advanced again this fall, with the ultimate goal being the CCI3* at Fair Hill in October. Of course, nothing is official when it comes to horses, but Colleen has a pretty cool relationship with this mare, so I’d like to think luck will be on her side.

Colleen has known June, sired by Freedom Z and out of Rising Spirit, since the day she was born. She backed the mare and brought her through the levels and has also had the privilege of riding June’s babies, as they’ve had four successful embryo transfers out of the mare. One baby unfortunately passed away as a yearling after a pasture accident; one was sold in Ontario; Boyd Martin has the oldest, a 5-year-old gelding named Barry; and Peter kept a 4-year-old mare, April, for Colleen to ride.

“They all seem to be very good jumpers like her,” Colleen said. “They’re very eager to please and to work. Barry kept bucking me off in the beginning, so Boyd helped me out with him and then ended up buying him. He’s quite athletic and doing really well. He’s a very good jumper. The mare, April, suits me in that she’s very much like her mother, so I’m happy Peter kept her for me to ride. April did her first Beginner Novice in Aiken over the winter and finished on her dressage score in third place.”

Congrats to Colleen and June on the win at The Fork, and best of luck in the move up to Advanced later this season. 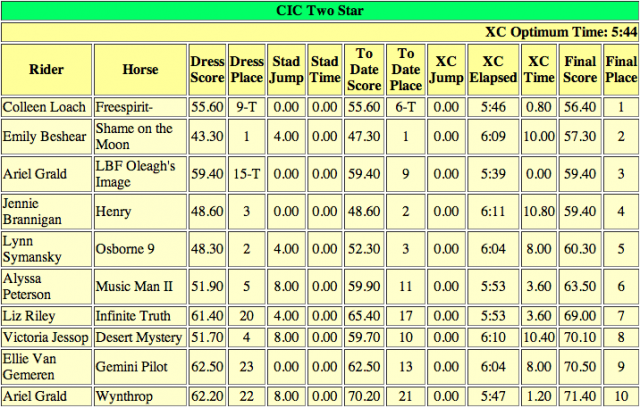