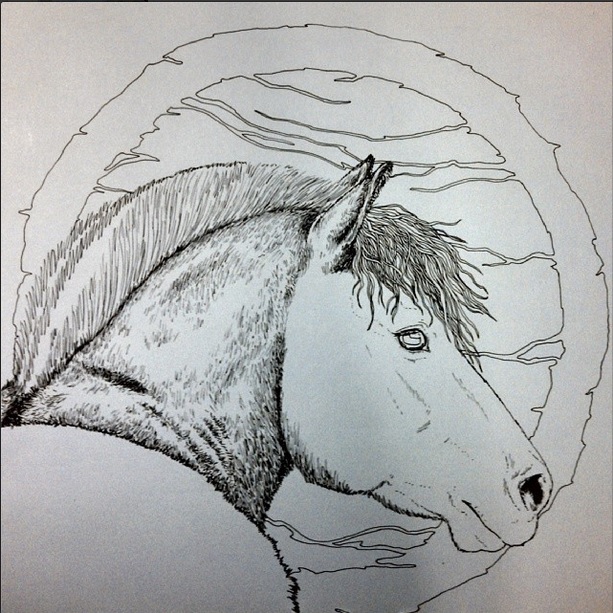 After over a year of artist’s block, I’ve thankfully found inspiration and have started drawing again. Maybe the arrival of spring has something to do with it, but any hour not spent at the barn has been spent in a flurry of graphite and ink. While I have been expanding my portfolio to contain images of some stranger creatures, such as the whimsical cuttlefish and a rather haughty-looking llama, my first artistic love will always be horses. Whether you’re interested in my goofier creations, such as my (in)Famous illustrated posts on EN, or prefer something more realistic, I’ve been working hard at making my art more accessible to others on my website and Facebook page.

Stay tuned for the finished piece of my Norwegian Fjord, and feel free to contact me at [email protected] with any suggestions for my next “(in)Famous” illustrations on EN!

Genecand Bids for FEI Presidency: Pierre Genecand of Switzerland announced that he will be running in the next FEI presidential election. Genecand was the director of the organizing committee for the 1991 Geneva CHI, as well as a member of several international competition committees.  “After eight successful years led by a remarkably visionary president, the time has now come for necessary change in order to keep the dynamic of the FEI alive and to stabilize what has been established,” he said. [Chronicle of the Horse]

Cavalor Feed for Thought: Equine gastric ulcer syndrome (EGUS) can be treated by a number of products, each with their own benefits and downfalls. Omeprazole is commonly used to temporarily block acid production in the stomach, allowing the ulcers to heal. However, because it inhibits the digestion of protein, it should not be used for longer than 90 days. Ranitidine inhibits the release of acid, but is only effective for 8 hours at a time. Sucralfate is used to treat more serious ulcer cases, and works by coating the stomach ulcers with a protective layer. Its downsides are that sucralfate must be given on an empty stomach, and it inhibits the absorption of some nutrients. [Feed for Thought]

Mother and Daughter Convicted in Cruelty Case: Sally-Anne Rix and Louise Carla Rix of Britain have been banned from keeping animals for 15 years after being convicted of causing unnecessary suffering to three horses. Their horses, Elf, Sprite, and Pixie, all were extremely underweight, lice-ridden, and had hoof and lameness issues due to neglect; they have since made a full recovery at a charity called Redwings. One of the owners had previously been banned from keeping horses for 10 years, but circumvented the sentence in order to get the horses. [Horsetalk]

Best of the Blogs: Yesterday morning, Boyd Martin posted a blog entry reflecting on the results of The Fork. Check it out! [Boyd & Silva Martin]

SmartPak Sale Ends Tonight! Use the coupon code “SPRING14” to receive 50% off ALL SmartSupplements in SmartPaks! Whether your horse needs SmartHoof Pellets for resilient hooves or SmartShine Ultra for that sleek show ring look, SmartPak has you covered! [SmartPak Spring Sale]