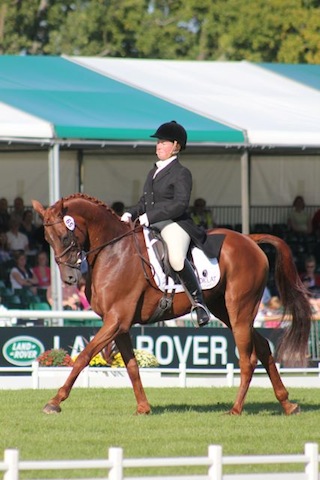 After ticking off Rolex and Burghley, Colleen is actively fundraising for Badminton in the spring, and working on her weak link, the dressage, with Linda Zang.

“We all know exactly what I need to be working on; we all know that my flatwork is not quite there. It’s made such great improvements, but honestly it’s not where I want it and it’s not quite competitive enough to make him really, really stand out.  He had a couple of weeks off  after he got back from England,and then I started him back up to do flat work, so he’s been doing flat work, and on jumping probation for a little while now!  He doesn’t look at the size of the fences – obviously big does not bother him, and I came off Burghley and was talking to Jimmy and told him that honestly I could have used a few more combinations to get him to come back to me and to back off! That’s what blew me away, he’s so confident cross country, nothing bothers him!”
Luckily, Colleen told me Luke travelled like a champ both to and from England, and was ready to get back on a schedule,
“He doesn’t like being off work- he’s very demonstrative about when he’s happy to go back to work. It was really funny, after we got him back him from the quarantine he spent a week just not wanting to talk to anybody, wouldn’t look at anybody, avoided us at all costs, and then he essentially started to push us; like when we’d walk by his stall he’d come out and nudge us across the aisle, and that is so unlike him that it was quite funny. That’s his way of saying that he’s ready to go back to work.”
Colleen will spend most of the winter at her home base, training with Linda, apart from about three weeks strategically planned in Aiken to make the most of competitions, and by her own admission, lots of driving up and down the Eastern Seaboard,
“I’ve been working with Linda for about a year. I really need the consistency and the eyes on the ground because Luke is such a deceptive horse to ride – when you feel something it looks entirely different so he’s very hard to keep going. She knows exactly where we need to get him, and even if something’s not going just the way it should, she’s so good about having five or six different ways to explain it, to me and to him, and so everything we do is always headed in the same direction and we’re always looking for the same goal. Linda’s so flexible about the way she brings everything else in – I can see such a difference in not only my riding, but in the way that he goes because even if we start on something new, we’re building on the same foundation that we’ve been working on for the past year.”
I ask her where she gets her energy and her drive, how on earth she keeps going?
“My mum keeps me going, and I love it. I honestly couldn’t see myself doing anything else but this. I love it, I love the teaching. Even if I wasn’t competing at the upper levels, I love seeing a student grasp a concept and then be able to execute it a competition. It’s those different pieces that keep me doing this. Teaching a baby, or the younger horses or inexperienced horses that they can do this, that’s what I love; it’s certainly not the ribbons because if it was I would have quit many years ago!  My mother refuses to walk the course; she didn’t step foot on the Burghley cross country but she is amazing in that she can watch my kids, groom my horse and manage me at a four star, and that is how she keeps her sanity.” 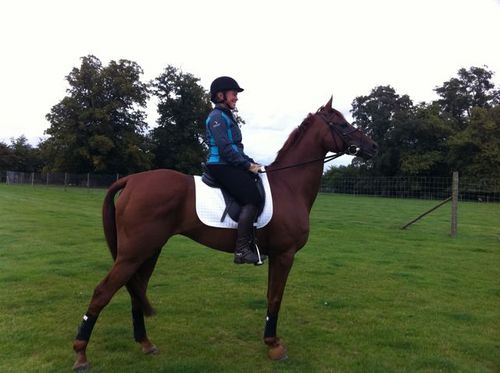 As her relationship with Luke has evolved, so has her perspective, thanks to her children,
“My three kids have taught me so much: I used to get really worried about stuff and really nervous, and I have learnt not to sweat the small stuff, and everything is small.  Everything we do in the horse world is a game, it’s a serious game, but it’s a game. I have my real life at home, and then I get to go and play with my horses, it’s so much a part of me that it kept me going when my kids were sick. Horses were always something that kept me grounded, and that I could go back to, that kept me thinking how things could logically progress. Kids are a huge loss of control anyway, but when you have sick kids you especially can’t force anything because some days they just don’t feel well, or some days they just can’t handle stuff. My horses kept me sane; they kept me focused on the bigger picture and stopped me dwelling on things and becoming morose.”
Those USEF lists might be big or small stuff depending on how you look at it, but Colleen, typically, chooses to focus on the positive, the  incredible outpouring of support for her in comments sections and forums, and explains that really that’s what matters more than the actual omission,
“I look at it sort of as if I’ve given away my younger years because I’ve had my kids and I can’t give my kids back, and of course I wouldn’t want to, but now they’re in a programme and  I get to concentrate on me and my horses, and we can keep going. It’s my turn, and I have one of the best support systems possible right now. I was in tears reading the comments and forums; it never occurred to me that people would stand up for me like that. It has blown me away and I’m completely speechless.  Not being on any list doesn’t change anything; it doesn’t change what the plan is this spring. I’ll lose access to some of the grants but honestly, what will be, will be. I can’t stress about it because I can’t change it. It blew me away to know how many people really support me; in my small group that I have I’ve already got so much support but then to open it up and realise how many people outside of that are paying attention was such a wonderful surprise. I don’t need accolades, my horses tell me when I’ve done a good job, and it was disappointing to me and my supporters that I didn’t get named to a list but it was such a great feeling for me to see all the fantastic support that I’ve received outside of that; that means far more to me than making a list. I’d rather not make a list and know that I’ve got people that are willing to stand up and really be vocal about supporting me because I want people to respect what I’ve done, and to know that I really have tried very hard to get my horses to where they are. I’m not the world’s best rider, and I don’t make perfect decisions, but what I hope is I make thinking and honest decisions for my horses.” 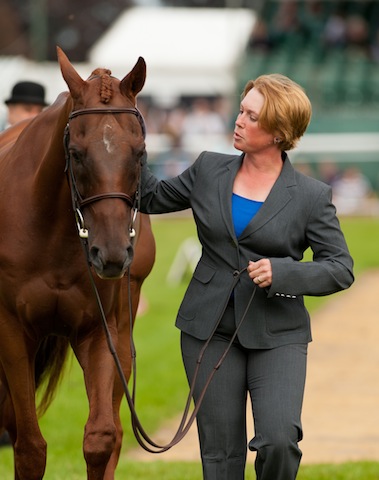 Photo used with kind permission by the terrific Nico Morgan at www.nicomorgan.com
Colleen hopes that her family will be able to make the journey to England with her in the Spring for Badminton, for her sake and theirs,
“It’s so important for me for my kids and my family to see me do this. I don’t want to say it’s a once in a lifetime thing because I don’t want to make it that, but it’s such an amazing experience that it’s what I want my kids to realise is out there.  I got to travel and go through Europe when I was younger, and I really and truly want my kids to have the same thing, to experience other cultures, to understand the difference between American and English eventing or French eventing, or anything along those lines because we don’t get enough of that in this country because it’s a pain in the butt to move horses from one side of the world to another!”
Finally, she seems to be gaining some respect from the men in her life – tough crowd!
“My dad and my husband never really understood why I was doing this, but now they’re beginning to grasp the concept. This year when I stepped up onto a bigger stage in a way it became much more acceptable to my dad, he could tell all his friends, especially after he saw me on tv. He used to think I was nuts! My dad is an extreme sports enthusiast, he used to run ultra-marathons and do all sorts of crazy stuff that I think HE’s absolutely nuts for, and now he gets to watch me do what he calls the crazy things!”
I ask Colleen if she dares think beyond Badminton,
“The Olympics are always a dream, but it is the six best horses and the six best riders for the team, and if they don’t consider me for the team then I’m okay with that. It’s got to be for the team. I would love to do it, I wouldn’t turn it down, but I can’t be concentrating on the Olympics when I’ve got to be concentrating on my horse. If the Olympics happen, then that’s awesome.” 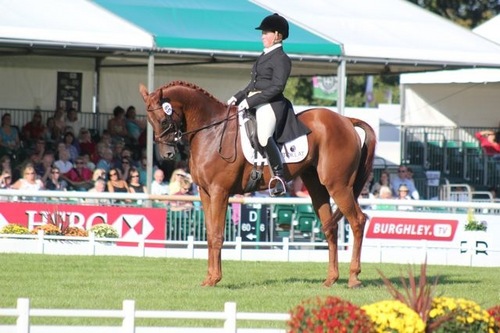 Awesome indeed. I look forward to following Colleen and Shiraz in the spring, and would love to see them cruise around Badminton. I’d like to thank Colleen for her time and patience in talking to me despite a terrible phone line, and me keeping her far longer than I originally promised; of course she was completely charming about it and I’m now even more of a huge fan than ever of this brave, strong, determined lady. Go Colleen and Luke, and Go Eventing!