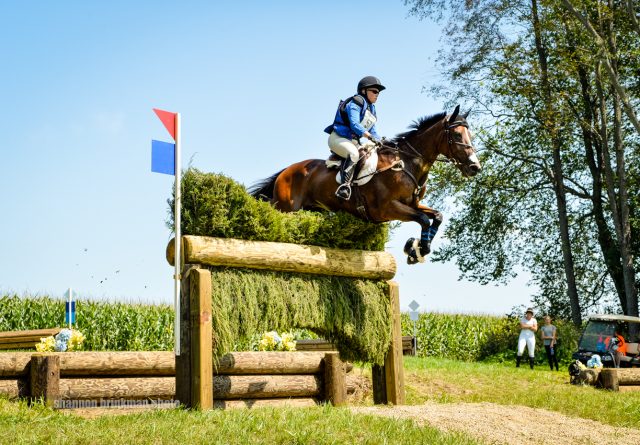 Colleen Rutledge said she wasn’t going to push for time on the CIC3* cross country course at Richland Park, but her Clydesdale/Thoroughbred cross Covert Rights took matters into his own hands.

“He was hysterical this morning. He came in the warm-up and essentially ran away with me for the first 10 to 15 minutes,” Colleen said of her 11-year-old homebred. “That actually makes me really happy because that meant he knew what we were here to do and he was going to do it. He went out on course and was fabulous. He felt fantastic and made it feel so easy. I could not be happier.”

In the beginning, Colleen attempted to control “CR” a little more to make sure they “stayed true to the fences,” but as our growing four-legged children sometimes prefer, CR didn’t want any help from Mom, so Colleen gave up and let him do his thing. They finished clear and inside the time to hold the lead in the CIC3* on 33.3.

“He’s got such a big stride he can leave out strides and be on a bigger step and everything is so easy. He doesn’t make a massive effort over fences, so he’s in the air for less time. He’s super efficient across the ground, in turns and over fences, and he’s really quite fast. I went out to establish a rhythm and spent a lot of time towards the back half bringing him back to me.”

The course has been changed this year to include a new loop around a corn field which Colleen said opened up some gallops and course designer Ian Stark “took advantage of every piece of terrain he possibly could.”

Colleen’s plan tomorrow is to take Marc Donovan’s show jumping course one fence at a time. “We’re still knocking the rust off because he’s been on the shelf for a year. But I’m so happy he came out of the box today and said, “We are going NOW!” 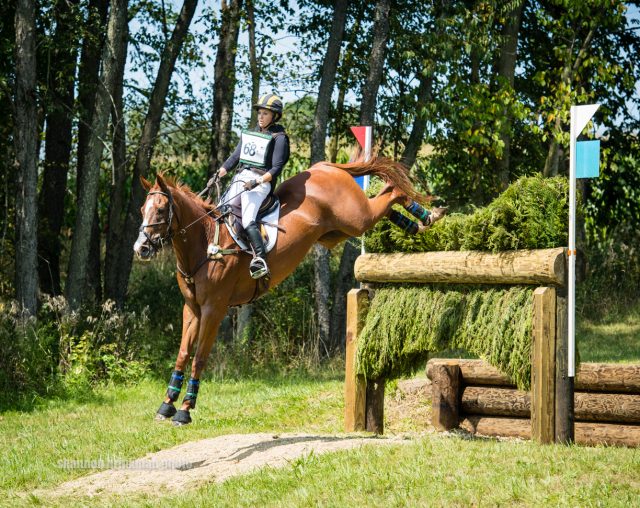 Michigan native Katie Ruppel had an eventful day starting when her first CIC3* horse Foreign Affair hung a leg at a log and “just shot me right off. I was a missile,” she said. “He just made a little mistake. He was trying his guts out.”

The horse is fine and even went on to jump the next fence without his rider, but Katie is feeling awfully sore. She rallied to ride Houdini, her own 13-year-old Thoroughbred gelding, who was sitting in second after dressage and finished double clear, one second under the optimum time of seven minutes.

“Adrenaline is a great thing, but Houdini did pack me around today,” Katie said. “Nothing is obviously broken” but she can’t walk and is in significant pain. She’s showing no signs of bailing out on show jumping, however, stating she will “make it happen.” 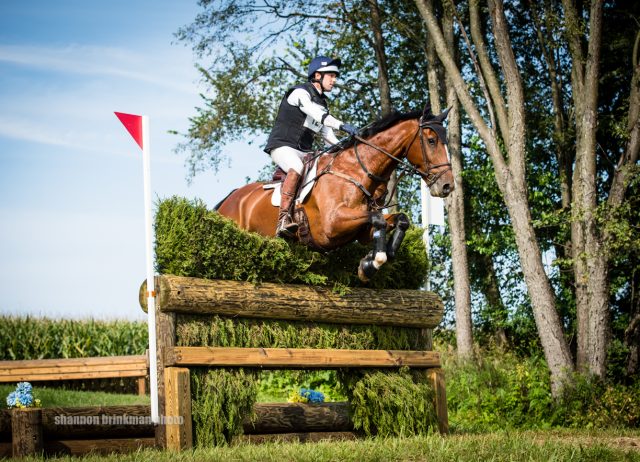 Will Coleman held on to third place with last year’s CIC3* winner Tight Lines, a 10-year-old French Thoroughbred gelding owned by the Conair Syndicate. They went clear and fast to sit on 40.1.

“I was thrilled with his round. It was about foot perfect, honestly. I can’t think of a jump I’d want to have gone better,” Will said. Following “Phish’s” first four-star at Rolex this spring, Will and his team reevaluated the horse’s training and now they are starting to see real results.

Will won the CIC2* with Off the Record, an 8-year-old Irish Sport Horse owned by the Off the Record Syndicate. They were fourth after dressage on 43.9 and added no additional jumping penalties to their initial score to take the win.

“I always thought he was horse that could win a lot of competitions. He’s very capable on flat, a good jumper, and his cross country is getting better and better. He’s showing me more of a gallop and I feel like he has a bright future,” Will said.

“He’s eight this year so I decided it was time to put more pressure on him competitively and see how he measured up. So far he’s answered the bell. He was second at Bromont CCI2* and now he’s won this.” 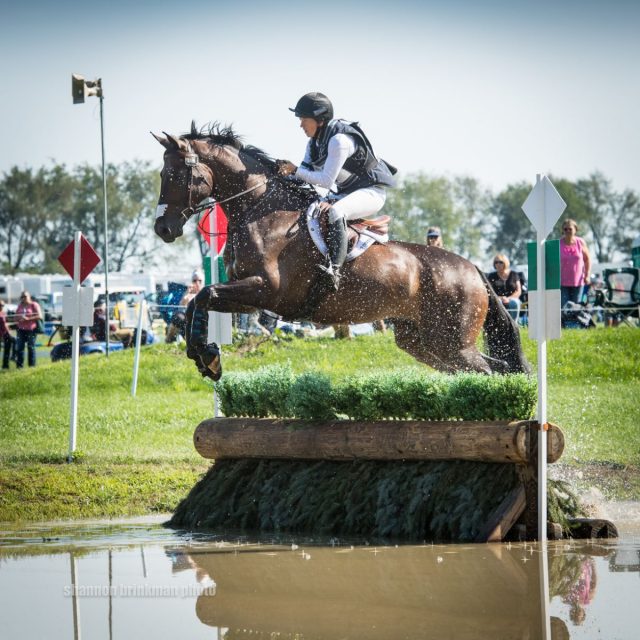 Like many others, Will is aiming to run a CCI at Fair Hill in October. He applauded the efforts by Richland Park organizers Bob and Kay Willmarth to prepare good going as well as the course changes implemented by Ian Stark and his team.

“The new loop adds another element of galloping and real cross country questions. It’s more of what we need to see in this country, and it will improve people’s riding and show them what they need to do to develop horses,” Will said.

“Bob, Kay and their crew did incredible job developing the ground. In time that loop will be as well as the rest of course. We were all happy though and they did wonderful job. Bob has been watering every week since May and they’re in a huge drought here, so hats off to them.”

Eventing 25 Emerging Athlete Jenny Caras had a good day with two second place finishes in the CIC2* and CIC* and a double clear round on cross country in the CIC3*. Fernhill Full Throttle and Trendy Fernhill both finished on their dressage scores of 45.0 and 45.7 while her longtime partner Fernhill Fortitude is tied for sixth after the first two phases in the three-star with a 49.0. 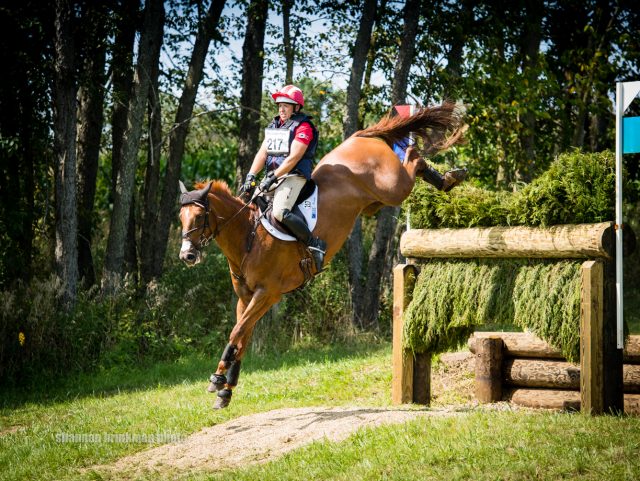 You couldn’t ask for a better performance in a horse’s first FEI event than to finish on your dressage score and win the whole shebang. Elisa Wallace piloted Riot Gear, an 8-year-old Oldenburg owned by Steve and Vicki Sukup, to a win in the CIC* after a fast and clear cross country round today. “Ryebread” will run a couple more events before a season finale in November at the Ocala Jockey Club CCI*.

“He was very good. A little green in some spots, which is to be expected. This was his second Preliminary and he was so rideable and adjustable and so much fun!” Elisa said. “It was a great course for him to gain confidence and experience with the atmosphere. He has an amazing gallop and he gave me a great feeling and was very proud of himself when he was in the vet box.”

Looking to the Advanced division, Buck Davidson and Carl Segal and Sherrie Martin’s Copper Beach lead with a 28.2 after a clear and fast cross country round. NAJYRC individual silver medalist Cornelia Dorr is sitting second in her first Advanced with Louis M. Boyd Martin and Long Island T added 10.8 time on cross country but are still third with a 39.6.

It’s been quite the whirlwind weekend with Richland Park, Millstreet and Blair Castle running and we thank you for sticking with us and being patient with reports. Stay tuned, we’re doing it all again tomorrow ! 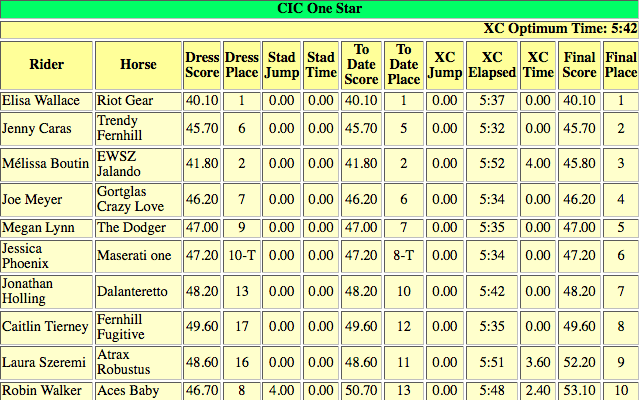 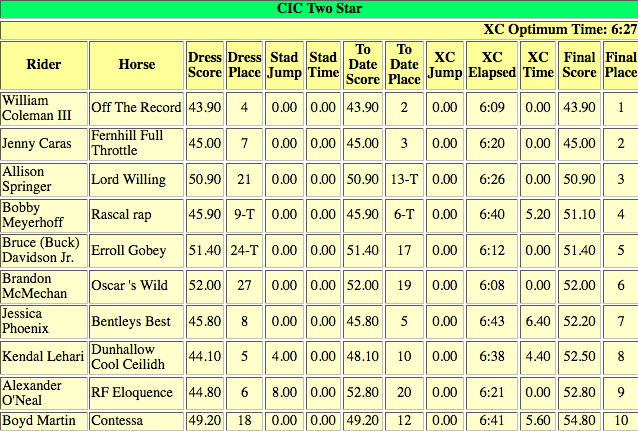 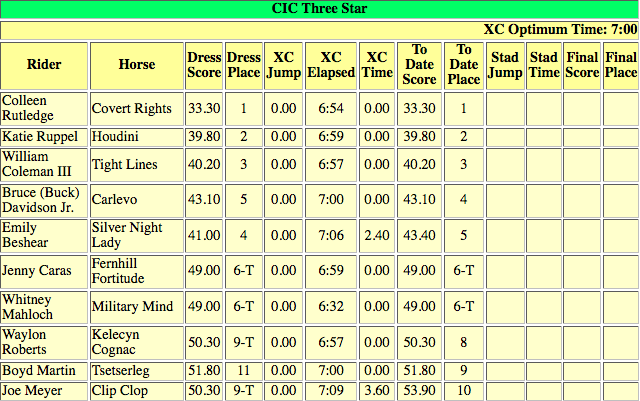