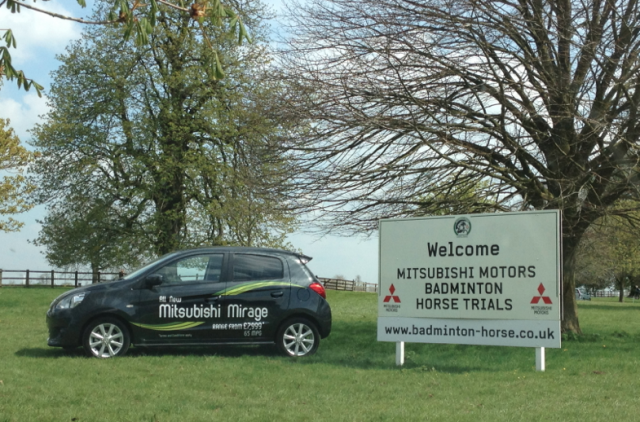 Yes, I did stop in the middle of traffic to take this picture for you.

Greetings from Badminton! The first horse inspection begins in about 45 minutes in front of the beautiful Badminton house, and I’ll be bringing you a full report and photos from all the action at the jog. But first, I caught up with Colleen Rutledge for a quick interview before she went to change into her “monkey suit” — as she called it — for the trot up with Shiraz.

Colleen is looking to make history here at Badminton this weekend as the only rider to complete five of the world’s six CCI4* events on the same horse. She seemed incredibly composed and in good spirits — definitely ready to tackle one of the world’s toughest events.

In other news, I’m thrilled to be at Badminton and so looking forward to bringing you all the action here on EN this weekend. Today was my first foray into driving in the UK, and I’m pleased to report that only a few roundabouts were harmed in the process. It’s incredible to be here at an event where SO many people are in attendance for a jog.

There are countless spectators enjoying Pimm’s at the many outdoor seating areas and shopping the trade fair stands everywhere I turn, not to mention watching the Mitsubishi Motors Grassroots Championships.

The word on the street is that this is higher attendance than usual, as evidenced by the media center running out of meal tickets before this road weary EN reporter could grab a sandwich. It’s safe to say that we’re seeing an uptick in spectators and media alike because of the significance of this weekend — the first time in history two riders will be facing off for the Rolex Grand Slam of Eventing.

I just received the order for the first horse inspection, and Andrew Nicholson has chosen Nereo and Avebury as his two mounts to contest the Grand Slam, while William Fox-Pitt has picked Oslo and Parklane Hawk.

It’s also worth noting that the weather is brilliant here at Badminton, mostly sunny with temperatures in the mid-60s. The rain cloud that followed me at The Fork and Rolex looks to be gone for good. Stay tuned for much more from Badminton, and don’t forget to read my preview for a full scoop on all the great story lines I’ll be following this weekend.

The jog begins at 4:30 p.m. local time with Oliver Townend and Armada leading the way. I’m off to try to catch Clark Montgomery for an interview before the jog, and I’ll also be looking to catch up with Tiana Coudray afterward. Go Badminton.