Lila Gendal is the newest edition to our family of bloggers here on EN, and she comes with a particularly interesting perspective. Lila lives in Vermont, and works for the famed Denny Emerson at Tamarack Hill Farm, and when she’s not buried in snow, she is privy to the inner workings of one of the Eventing world’s most illustrious program. Lila has an amazing mare named Valonia that she has been slowly bringing up through the ranks, and is able to ride many of Denny’s young horses, and learn the “old school” way of doing everything. Read her first blog here. 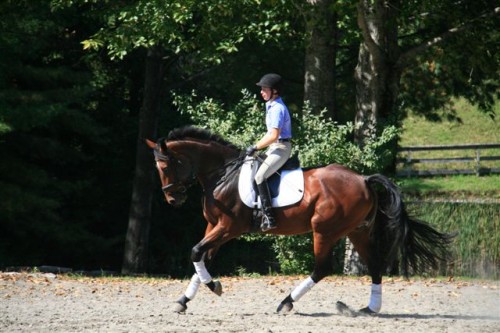 I cannot count how many times I have heard the following phrase from Denny: “Dance the canter” . When I first started riding with Denny, the concept of dancing the canter was about as foreign to me as baseball statistics. I’ll never forget my first jump lesson with Denny. Let’s paint a picture here. Imagine a C- student sitting in a classroom hiding behind a text book in order to avoid making eye contact with the teacher. The teacher asks a question, while the entire room anxiously raises their hands waiting to shout out the correct response, but instead the C- student shirking behind the desk gets called on and has one pathetic and extremely incorrect answer. In my first jump lesson I was lucky if I had a C-. I had absolutely no clue what I was doing that day; let alone what the heck dancing the canter meant. Naturally I did not ask Denny to please explain his concept, because that would have been too easy and of course I was deathly afraid of him.

Fast forward about a year and a half when a light bulb switched on and I had an epiphany. I was struggling on the flat one day when Denny decided to get on my stiff and inverted mare. As soon as he got on, he completely changed the way my horse was going. She went from rigid and inverted, to soft, light, and through. Prior to getting on my horse, he explained what was going wrong, but I couldn’t process this information simply because I was such a green rider at the time. The second he got on my horse, I understood. I realized what the problem was and what needed to be done. I remember getting back on my mare and was able to mimic (to a degree) what he had just accomplished. I discovered that day I was very much a visual learner and evidently NOT an auditory leaner. I had to see something in order to have any hope of replicating what I was attempting to accomplish.

Once I established how I was able to learn a concept, I ran with it. I watched as many lessons as I possibly could. I watched Youtube videos of grand prix dressage riders, jumpers and event riders. Watching talented riders was the best thing I could do to get better. Riding wasn’t enough for me; I had to learn from watching in order to perfect my own skills, or utter lack of skills for that matter. I was mesmerized when Intermediate or Advanced riders would come for a jump lesson. Anytime Denny rode with us I was like a sponge soaking in all the lessons to be learned. He always had (still has) this remarkable way of making jumping look effortless, whether he was on a “crotch rocket“ or a “deadhead”, he made riding look like a walk in the park. 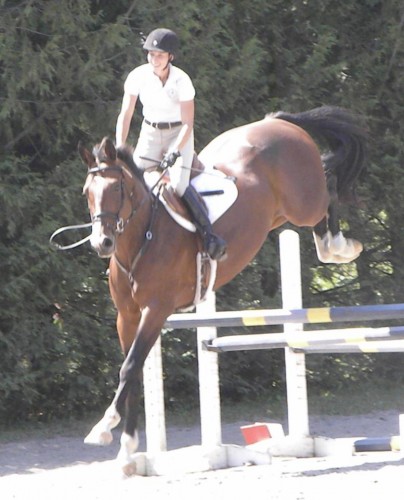 Skybreaker at a Tamarack jumper show in 2012

After countless years, horses, and hours spent in the ring I finally was able to grasp this whole dancing the canter concept. What Denny was attempting to explain to me that day was that the quality of your horse’s jump is directly proportional to the quality of your horse’s canter. A horse with a bad canter most likely will follow his poor canter over a jump, resulting in a less than perfect jumping effort. Similarly, a horse with a good canter — a canter with a quick hind end that lifts the front end will arguably follow his/her good canter over the jump, resulting in a successful jumping effort. When Denny speaks of dancing the canter, often times he counts to three while simultaneously clapping his hands in the rhythm he wants your canter to sound like. For instance, in a quick, upbeat rhythm, ‘One, Two, Three, One, Two, Three, etc..’ Opposed to the lackadaisical canter in a slow, downbeat rhythm: O N E, T W O, T H R E E, O N E, T W O, T H R E E, etc. I discovered that eventually I didn’t even need to look a horse jumping. I could close my eyes and listen to a horse cantering around jumping and I could tell if that canter was the “right” canter or not just from the sound.

Now when I warm up Valonia for a jump lesson, right away I know if her canter will suffice for the jump school ahead. I know right away if she isn’t quick enough off my leg, or if she is too heavy in front. This instantaneous feeling I have now for the canter took a very long time to establish, not only conceptually, but developing a feel for it as well. Now I know what it means to dance the canter and I know how it feels. Understanding a concept doesn’t mean anything if you don’t know how it feels (at least in my world it doesn’t). So much of riding is about feeling. So much of what Denny teaches is about analyzing concepts and theories and applying them to your riding. I had to feel something in the saddle before I had any hope or understanding his lessons. For me, I had to watch others ride, then develop the correct feeling under saddle, then execute.