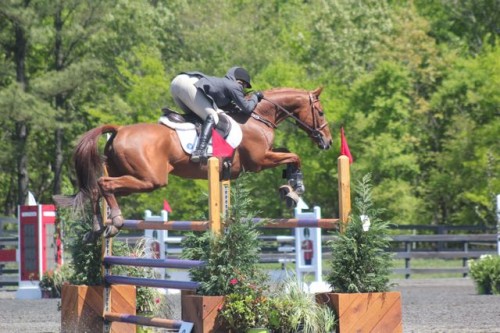 On Saturday, we found out that Colleen Rutledge fell at Morven Park and fractured her hip. She was scheduled for surgery yesterday but apparently there were a lot of trauma cases that took priority, so she got bumped to first thing this morning. Her Facebook was just updated to say that she is now out of surgery.

Colleen is out of surgery and in recovery. Surgeon says everything went great no problems she will not need anymore surgeries. She will be able to go home in the next day or two.

Great news for all of Colleen’s supporters as our biggest wish in these kinds of situations is that the recovery process is as smooth as possible.

Colleen also provided an update on what happened to cause her fall this past weekend:

It was a simple, slightly downhill table. [Her horse] had been slightly overly aggressive at the previous fences and was no different to this one. She objected to me asking her to slow down as we were approaching, and as we reached the fence, rather than balancing and jumping up and around with both front legs, she braced and twisted catching her front right. I’m not sure what side hit first, but we definitely both hit the ground, where my air vest deployed and regular vest prevented any major internal injuries. Somehow she rolled over my head, because there is a dent in the visor of my helmet. She sustained minor scrapes and some bruising and stiffness from her ordeal, but is otherwise fine. The force of the fall dislocated my left hip, causing an acetabular fracture. Other than that, I’ve just got some bumps and bruises and I’m a bit stiff today. I’m so thankful for the safety equipment that I have, truly believing that it prevented me from having greater injuries. Thank you to all of the people who helped me and got me taken care of in a timely manner.

If you would like to send a get well card to Colleen, her address is 6953A Linganore Road, Frederick, MD 21701.

The EN family sends their best wishes for Colleen’s recovery!