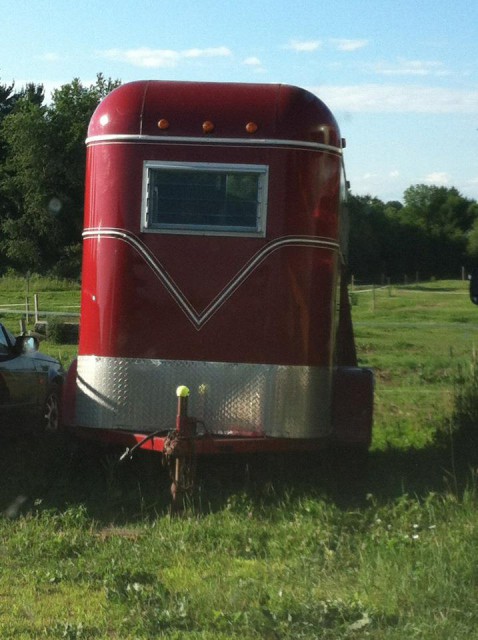 It is very cathartic, this confessing. Maybe that’s why my Catholic friends (mostly lapsed Catholics, but still) seem so able to “let it go.” Cue Disney character bursting into song here.

I thank all of you for providing the canvas for my Jackson Pollock musings. For the record, Jackson Pollock was an artist that threw paint at a canvas and saw what stuck — appropriate reference for the writing that comes out of my brain. (That little reference is where I show my mother that my Dartmouth education wasn’t completely wasted on her horse-obsessed spends-time-in-horse-poop daughter).

You, gentle reader, are a gift, being my imaginary audience and all. Remember your giftiness when you are soaking your horse’s abscessed foot in Epsom salts in a 20-degree barn on Christmas Eve. A gift. Yeah, that’s it.

So let’s just talk about horse trailers here for a minute.  As you who have read my blogs know, I collect riding pants. There was a time when I collected trailers. (Those were halcyon days when I was employed). TRAILERS. At one time I had two and my eye on a third, sold one, bought one and coveted all. In the three years of my adult horse ownership, I have owned three trailers. If that seems excessive, you are right. It is excessive. Unnecessary. Stupid. And secretly fun.

When I was a young rider from the age of 8 to 17, eventing and doing Pony Club in New Hampshire, we did not own a horse trailer. And we lived in what was then a very rural (but now unfortunately suburbanized) area, with few neighbors. I don’t know what my parents were thinking. Every time I had a Pony Club meeting or a lesson, I had to ride to it (10 miles round trip). Very undignified indeed (but, as Denny Emerson would say, I was AND my horses were FIT).

Show season was a logistical spaghetti of who was going when, what time, which state, and on and on. Somehow we managed to get to shows, but goodness knows how.   credit my force-to-be-reckoned-with mother as she juggled parenting my twin brothers and their sports schedules with my firstborn’s need (demand?) for organization and clarity around my horse lesson, Pony Club and show schedule. Army generals have nothin’ on that woman.

I think that is where the obsession with trailers began. As adults, we make our own decisions (that’s what we tell ourselves, anyway). If we want to buy something, we buy it, dammit. So when I acquired my OTTB Sweetie, I was determined not to be a slave to anyone else’s trailer. I had my birthday money (yeah, I’m an adult, but I have wonderful parents who spoil me), so I was gettin’ me a trailer.

I searched Craigslist in my area and found something in my price range ($1,000-2,000 — I know, I know, I am wiser now). As a single woman for many years, I pride myself on “doing it myself.” I’ve repaired appliances, painted my house and dug all my gardens. I can do most anything (according to … well … me).

Some might say that it’s a throwback to being 3 years old “I do myself!” and they are probably right. They say that as we age, we regress anyway. So I blame my advancing age. But I digress (because we 52-year-old “3 year olds” have the attention span of a hummingbird, and I digress often, as you know).

So I ventured out alone into the December snowy night (cue dramatic, epic journey music swelling) to see what I knew was going to be my new trailer. I did know it was RED, and the car I had given up to afford Sweetie was a red BMW 335xi (300 hp, for those of you who care … I do), and although I love my horse, I also loved that fast, sexy car.

So, since this trailer was red, that about sealed the deal. Those of you who think that women buy vehicles based on color, you are correct. Shhhh — don’t tell the salesmen/women. Despite being emotionally blinded by the color, I was determined to be a savvy business woman. I adopted my poker face. (Note I am not on the professional poker tour, so facial expressions on me are a dead giveaway).

Last time I saw a horse trailer was in 1979, and this was a 1985 Kingston. To me, this was new and improved. And it was RED — did I mention this? At that moment, common sense went out the truck window, and I took this as a sign from God that this was THE trailer. He even made it the SAME COLOR as a sign to me to buy it! He is so damn smart! Well maybe not damn, but you get the idea.

I got into it, looked around and in my most savvy business woman voice, said, “Looks great! I’ll take it.” I didn’t waste any negotiating skills there. I don’t even think I walked around the trailer, and besides, I couldn’t get behind it because it was backed up to the barn, and there was a snow bank between it and the barn. It looked fine to me! So what if it was 8 p.m. in December in New England (read: pitch black).

The owner said that she just had to use it one more time to take her horse to the vet, and then I could pick it up. Obviously, it was just jim dandy to use! AWESOME! I was mobile! I patted myself on the back till my arm was sore all the way home.

I picked up the trailer two days later and hauled it triumphantly over to my barn. I felt like the Grinch coming down the mountain to Whoville trumpeting his arrival. “Here I come! I have a TRAILER!” I was pinching myself (again with the infliction of pain, what’s with that?!) that I finally had my OWN TRAILER. A dream come true.

I pulled triumphantly into the driveway of Green Acres Stables. I swear in my head I was smiling and waving to all the onlookers like Princess Di at her wedding. Apologies to Princess Di, but the analogy is accurate, as disaster loomed, but I was oblivious to that as I carefully pulled down the driveway.

We needn’t mention that the trailer was riding like a sulky. Trailer hitches and their various levels and angles had not been part of my education — the aforesaid education heavily skewed toward English major and law school and not very heavy on the math/physics/practical.

It could be accurately stated that as I pulled over the potholes in the barn driveway that the back end of the trailer was dangerously close to banging the ground, a fact of which I was happily, and again, oblivious to, my attention focused on waving and grinning, and of the booming bass that trumpeted my arrival.

I was MOBILE and invincible! I inartfully parked my new wheels (50-point turn, anyone?) and fell to inspecting my prize. I knew that there was some rust on it, but it was just “surface rust,” according to the ad and the seller. I hadn’t bothered to get under it in the mud and snow. There was no need! It was RED! Plus, I didn’t want to muss my work clothes!

The trailer MUST be OK — the owner used it the day before to take her horse to the vet! She had assured me all was well! My legal training on purchase and sale and contracts? Pshaw! Who needed that with such an honest seller who I had never met!?

I lowered the ramp to hop in and stand in my new trailer, talking to myself with the cheerful patter of a crazy person who just spent all her birthday money on …  a … not sure what. A shower of rust rained down from the springs to the mud. No mind, metal things out in the weather always rust! It’s a Kingston! These things last forever! (So what if it was nearing its 20th birthday — it was RED!)  It’s PERFECT!

Perfect for … oh yeah. Stay tuned for part 2 of the story of the little red trailer that could.