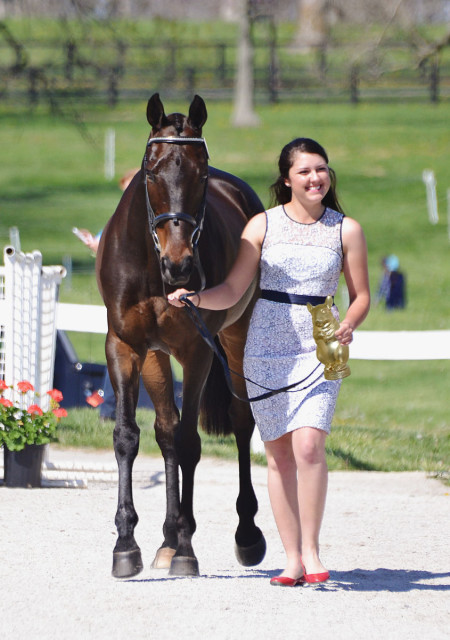 The votes have been tallied, and we’re very excited to announce that Libby Head and Sir Rockstar are the winners of the Golden Chinchilla as 2014 EN Horse & Rider of the Year! University of Georgia student Libby and her pintsized OTTB “Rocky” ran away with the voting to be the decisive winners.

“I certainly wasn’t expecting to win, so it was crazy how many people voted for us,” an excited Libby said upon learning she would receive the Golden Chinchilla. “I’m really glad everyone loves Rocky, and I’m glad he gets the recognition he deserves.”

Here’s a look at the final breakdown in the poll, which received more than 2,500 votes: 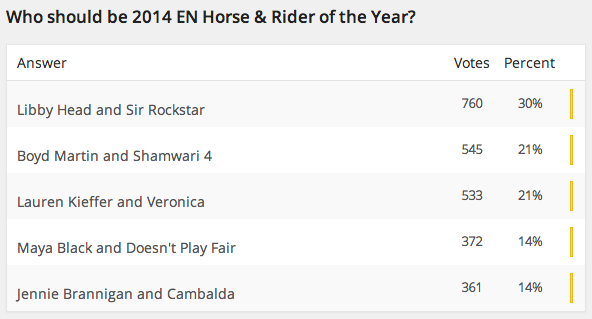 Their big win tells us you love a Cinderella story just as much as we do, and Libby and her 15.2-hand OTTB Rocky captured our hearts and imaginations with a fairytale 2014 season. Heading into their first CCI4* at Rolex Kentucky as determined underdogs, Libby and Rocky, a 17-year-old gelding by Rockamundo out of How Unusual that raced 16 times, ultimately stole the show.

They romped around Derek di Grazia’s cross country course clear with just a handful of time and jumped one of just 10 double clear show jumping rounds the next day to finish inside the top 20. Libby and Rocky capped their season with a top-10 finish at the Dutta Corp Fair Hill International CCI3*, pulling off one of our favorite saves of the year in show jumping:

And their story is far from over. Though she was not able to raise enough to go overseas to compete at Pau last fall like she hoped, the $10,000 Essex Grant she received at the end of the year from the USEA Endowment Fund — combined with the amount she already raised and some help from her parents, John and Sara Head — will give her enough to go to Luhmühlen in June.

“He had a really long break after Fair Hill because he didn’t get a long one in the summer, and he came back feeling really great, definitely a little better than he felt last year,” Libby said. “I’ll get out of school in May, which is good so I can have time to really focus on getting ready for Luhmühlen.”

A 22-year-old animal science student at the University of Georgia, Libby is on track to graduate with her degree this fall. In the meantime, she’ll continue working on Rocky’s dressage, his nemesis phase, with her coach, Kyle Carter, and enjoying the ride on a little Thoroughbred with a big heart. Please join me in congratulating Libby and Rocky, 2014 EN Horse & Rider of the Year!