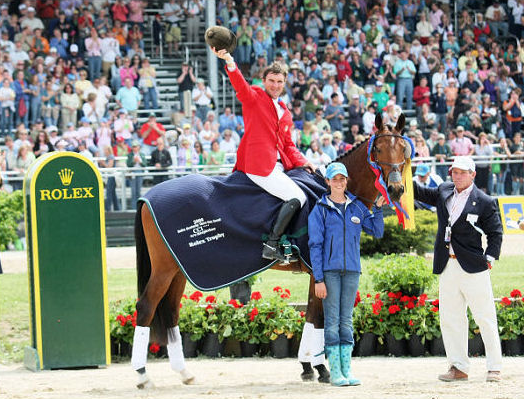 Phillip Dutton announce via Facebook that Connaught was humanely euthanized this morning due to complications from old age; he was 21. A 1993 Irish Sport Horse gelding by Bromehill Rouge out of Ballysimon, “Simon” was born in Ireland and produced by Carol Gee and Paul Donovan. Julie Richards imported the horse and later sold him to Bruce Duchossois for Phillip to ride.

Phillip and Connaught enjoyed an incredible partnership together, with highlights including competing at the 2006 Aachen World Equestrian Games after placing 4th at Rolex Kentucky that year. In 2007, Simon placed second at Rolex, and he finally won it in 2008, which landed him a spot on the team for the Beijing Olympic Games.

Connaught placed 7th at Rolex in 2009; in all the years the horse competed in Kentucky, he never had a rail down there in show jumping. Simon was truly a remarkable competitor whose athleticism and contribution to the sport of eventing will long be remembered.

“We take comfort in knowing that Bruce and Simon are together again now,” Phillip wrote on his Facebook page. Well said. We extend our deepest condolences to Phillip, Evie, Emma and all who knew and loved Simon. Rest in peace, Connaught.