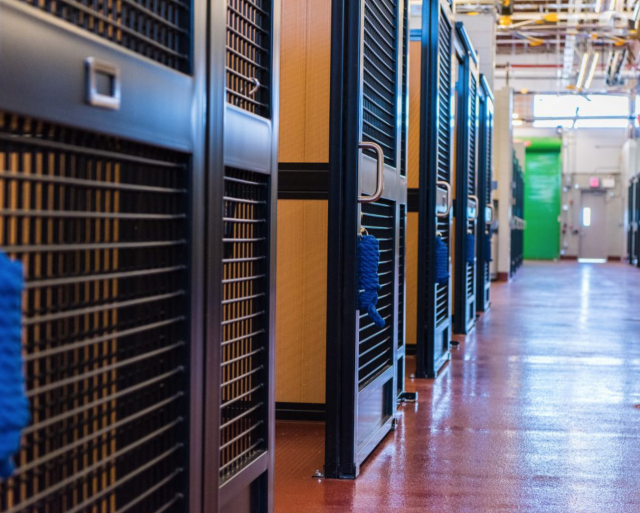 Stalls at The ARK at JFK Import Export Center. Photo courtesy of The ARK.

Controversy continues to swirl around The ARK at JFK Import Export Center in New York. The $65 million facility, located in Cargo Building 78A at John F. Kennedy International Airport, began providing equine import and quarantine service in September 2017. The ARK was expected to revolutionize the import process for horses and other animals flying into the U.S.

The state-of-the-art facility lists amenities that horse owners dream about at night: climate-controlled stalls, non-slip flooring, natural lighting, filtered air, 24/7 observation and care provided by an experienced equine staff, plus a bio-security program overseen by the Cornell University College of Veterinary Medicine.  The Cornell Ruffian Equine Hospital is located only six miles away from The ARK, with veterinarians on call for emergencies.

Horses can be unloaded from the plane and settled into their quarantine stalls at The ARK within minutes. In contrast, horses that quarantine at the U.S. Department of Agriculture’s 40-year-old facility in Newburgh, about 90 miles north of JFK, are immediately re-loaded onto trucks for an additional two-hour ride, having already endured a transcontinental flight.

Considering the laundry list of amenities and close proximity to JFK, one would think that more flight brokers would start using The ARK for import and quarantine. But that hasn’t happened. Instead, the 48 climate-controlled stalls have seen paltry traffic since the facility opened its doors to horses. Instead, the vast majority of horses flown into JFK are still being trucked to Newburgh for quarantine. 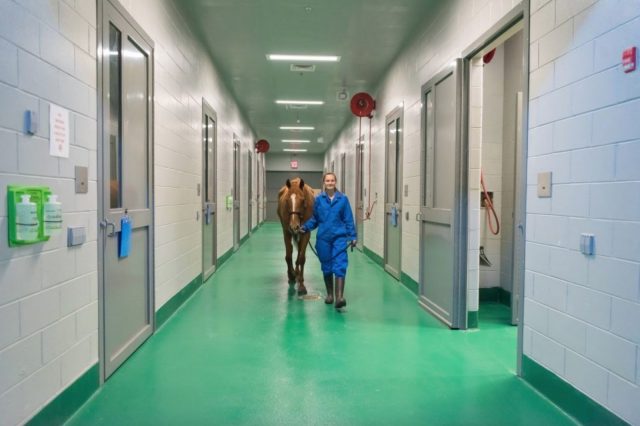 Kristen McGowan, Director of Equine Operations, walks a horse through the state-of-the-art facilities at The ARK. Photo courtesy of The ARK.

John J. Cuticelli Jr., who owns The ARK, filed a $426 million lawsuit last month against the Port Authority of New York and New Jersey, the agency that oversees the airport. The ARK’s lease with the Port Authority reportedly grants them “exclusive rights” to handle the quarantine for horses and other animals coming to the airport from overseas. The lease also specifies that the Port Authority “must use reasonable efforts to cause other providers to cease their provision of the exclusive services.”

The New York Times extensively examined the legal controversy in a piece last month, saying The ARK’s owner “does not know whether he has stumbled into some bureaucratic nightmare with the Port Authority, a turf war between government agencies, or is the object of a boycott by livestock shipping agents and transporters.”

Not all shipping agents are boycotting The ARK. Brook Ledge Horse Transportation, which flies horses through its wholly owned subsidiary Horse America, has been a staunch advocate of The ARK from the start. Horse America imported the first horse to the facility on Sept. 1, 2017, Parker Miller’s mare Superstorm Sandy, who evented to the one-star level in England and came to the Millers from Blyth Tait’s yard.

Scarlette Gotwals, Director of Flight Operations at Horse America and a licensed veterinarian, said Horse America’s experience while importing Superstorm Sandy for the Miller family made The ARK their go-to choice for import and quarantine. 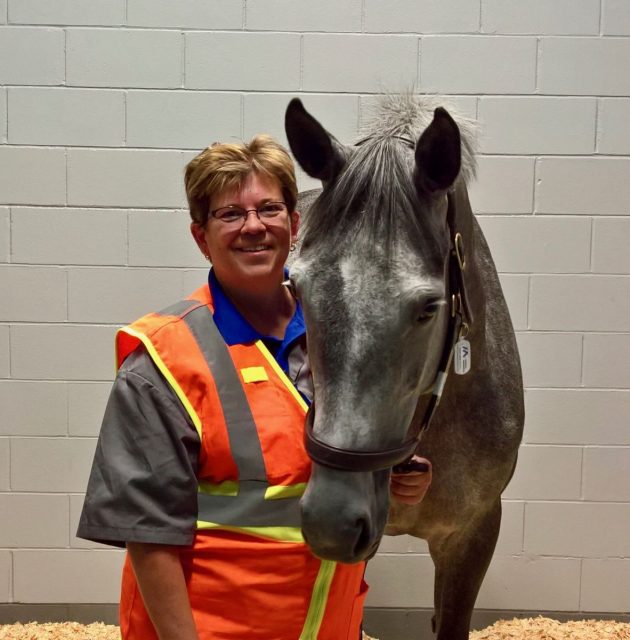 Dr. Scarlette Gotwals with Superstorm Sandy, the first horse to be imported at The ARK. Photo courtesy of Horse America.

“When the mare got to The ARK, her temperature was normal and gum color was good, but you could sense that she just wasn’t quite right. The equine team at The ARK confirmed that. I spoke to Marcie Miller, Parker’s mom, and she authorized us to take any measures necessary,” Dr. Gotwals said.

“We got her on GastroGard right away. We were able to start feeding her small, frequent meals because of The ARK’s 24-hour care. She was a different horse the next day. If she had come off the plane and gone on a trailer straight to another import facility, it could have been a different story.”

Multiple flight brokers have also called into question the experience and qualifications of The ARK’s staff of horse handlers. When asked for comment, The ARK told EN their equine handlers and staff are avid riders and horse owners with extensive experience in managing equine facilities.

“In the case of Superstorm Sandy, we were able to be proactive because her behavior was caught by the staff,” Dr. Gotwals said. “The equine staff at The ARK immediately informed us of their concern for Sandy.”

“If the owners were aware of the difference between The ARK and Newburgh, I think many would send their horses to The ARK,” Dr. Gotwals said, “but owners may not be made aware they have a choice. We prefer to place the owners in the driver’s seat to quarantine per their preference.”

Several prominent shippers have been vocal about why they continue to use Newburgh as opposed to The ARK. While traffic around JFK has been cited as a major concern, release times for horses at Newburgh are only offered at two times: 10:30 a.m. and 3:30 p.m. Monday through Friday, or 10:15 a.m. on weekends. Trucks line up on a first-come, first-served basis to pick up their horses at Newburgh. If trucks miss both release times, they must return the next day.

The ARK is flexible with release times, which can be scheduled during lighter periods of traffic. One of Horse America’s clients wanted to pick up his horse at 7 a.m. the day following the release due to a conflict in his schedule, and The ARK happily accommodated his request. 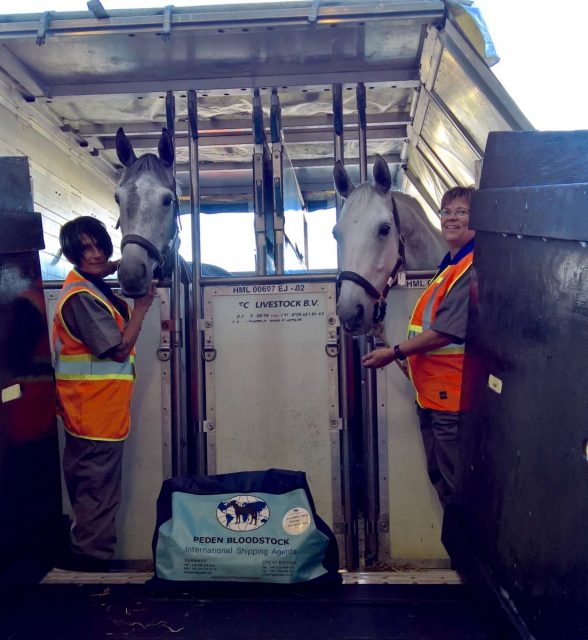 “When horses enter the country at JFK it means the horses deal with the traffic either way — immediately after they arrive from a 6 to 8 hour flight spent in a standing jet stall and sit in traffic to get to Newburgh, or directly from The ARK two days after their quarantine at the time you choose,” Dr. Gotwals said. “We need to start thinking of what is best for the horse, not what is convenient for the transport picking the horse up.”

“For me as a horse owner, I would never ship horses halfway across the world on a long flight and then put them on a trailer for two hours to quarantine,” she said. “The ARK is outstanding. I’d rather have a state-of-the-art facility providing the best care.”

While Horse America strongly recommends The ARK, their “putting the owner in the driver’s seat” philosophy means they still give their clients the choice of having their horses taken to The ARK or Newburgh.  Horse America charges $2,650 for import services and quarantine at Newburgh and $2,950 at The ARK — a $300 difference.

“Brad Gotwals, my husband and president of Brook Ledge, has always made it a point to find the most efficient routing, safest design for horse vans and the best drivers with the goal of seeking solutions to put the horses first,” Dr. Gotwals said. “We’ve carried that same spirit through to our flight company, Horse America, and I will apply the same values and principles in flying horses as we do with the ground transportation.”