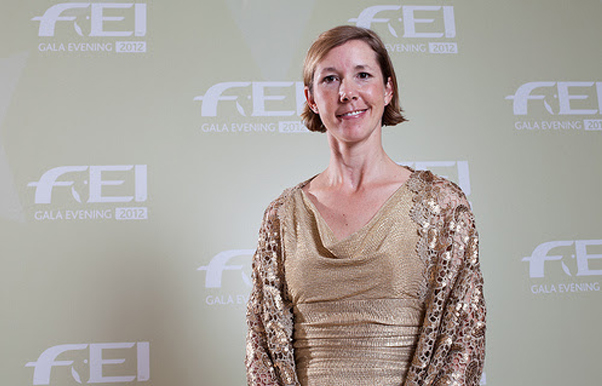 Courtney King Dye received the 2012 FEI Against All Odds Award in honor of her work to raise helmet awareness. Photo used with permission from the FEI.

Their accidents occurred much in the same way.

In March 2010, U.S. Olympic dressage rider Courtney King Dye was schooling a horse that tripped and fell. She fractured her skull and suffered a traumatic brain injury in the fall; she was not wearing a helmet.

Four years later in March of this year, Grand Prix dressage rider Silva Martin suffered a seizure and bleeding on the brain when the horse she was riding tripped, knocking her forward and causing her to hit her head on his neck before she fell to the ground.

Because of the helmet awareness sparked by Courtney’s accident, Silva was wearing her helmet that day, and this Sunday, she will present the inaugural Charles Owen Equestrian Role Model Award at the Millbrook Horse Trials Benefit Luncheon to Courtney, the person who arguably saved her life.

“I grew up in Germany where we rode without helmets because that’s just what we did in Germany, and when Courtney got hurt, I couldn’t believe it,” Silva said. “It was such a crazy accident, and I’ve never not worn a helmet since.”

Courtney was in a coma for four weeks after her accident, and she then spent three months in therapy learning how to walk and talk again. Four years later, the traumatic brain injury still affects her coordination and speech.

Her accident inspired the launch of Riders4Helmets, a helmet advocacy group that commemorated the first International Helmet Awareness Day on July 12, 2010, and has continued to honor the day on each July 12 since, partnering with helmet manufacturers to offer discounts.

The Charles Owen Equestrian Role Model Award carries with it a $5,000 cash prize to be donated to the charity of the winner’s choice, and Courtney will give her check to Riders4Helmets, which started a helmet revolution in the U.S. and beyond, ultimately spurring other awareness campaigns like Evention’s popular #mindyourmelon movement. 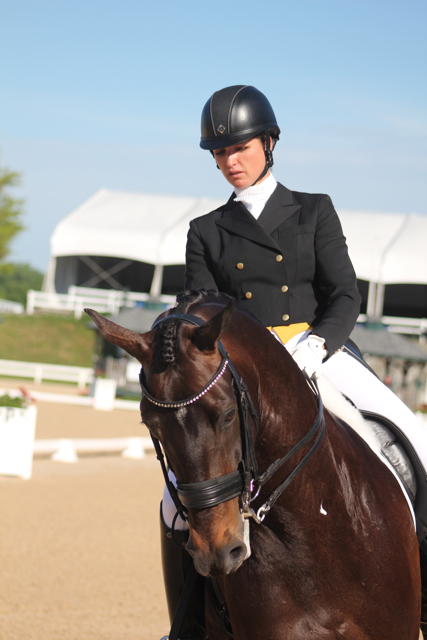 “The difference in awareness to helmet usage my accident has instigated makes me feel that it served a purpose instead of being a simple tragedy,” Courtney said. “I said at the beginning that if my accident saves one life, it makes it seem worthwhile, but the attention to safety it’s evoked has saved many and continues to save more.”

Courtney said she has heard from countless riders since the accident who, like Silva, said her injury encouraged them to regularly strap on a helmet, ultimately preventing a brain injury or even saving their lives in subsequent serious falls.

“Many people have reached out saying my accident saved their life, but no one else ever hears of them,” Courtney said. “The fact that Silva’s accident was so highly publicized shows the world that helmets can save lives, so it’s only right that she should be with me to present a check to Riders4Helmets, as she’s contributed a great amount to spread its message.”

And both Courtney and Silva continue to show that there is life — a rich, wonderful life — after a traumatic brain injury. Courtney gave birth to her first child, a daughter, River, on Feb. 20 of this year and said she is now very much focused on raising her, so much so that she has chosen to forego further therapy at this time.

“I spent nearly four years obsessively trying to heal, to become what I once was, and I realized I was sacrificing enjoying the things I still can do,” Courtney said. “Up until five months ago when I had my daughter, I was still in therapy to improve what I could, but now my daughter is way too important and time-consuming!”

Courtney continues to teach clinics and lessons and still holds onto her goal of one day representing the U.S. on the Paralympic Dressage Team. She qualified for the 2012 Paralympics in London but ultimately decided to forego the U.S. Selection Trials and now looks ahead to Rio.

And Silva is returning to competing this week for the first time since the accident — appropriate timing considering the meaning behind Sunday’s award presentation at Millbrook. She’ll be riding Benefactor RRS, a 6-year-old gelding owned by Melinda Walton and Larry Smith, in 2nd Level today and tomorrow at ESDCTA Summer Days in Gladstone, N.J.

“I’ve been riding Benny for a long time, and he’s very quiet,” Silva said. “My plan is to qualify for GAIG finals for regional championships and maybe qualify for the U.S. finals. It’s my first show back, so we’ll see how it goes.” 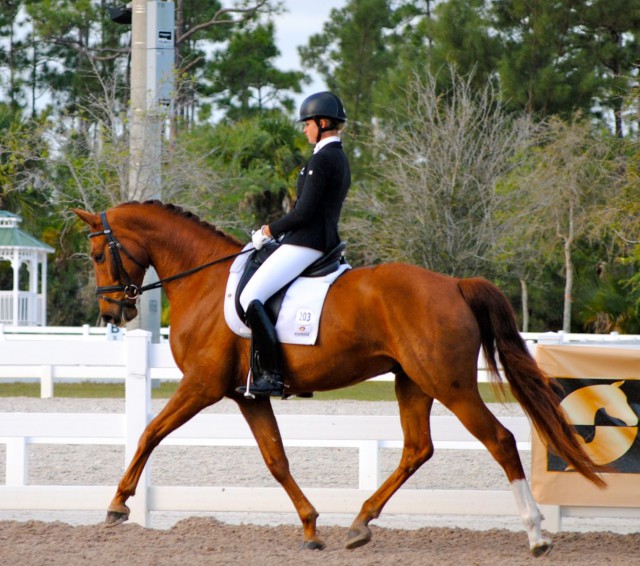 Silva said she’s been incredibly lucky to have such a supportive group of people around her to keep the horses going during her recovery, and she’s excited to finally be back in the saddle, though she’s still taking the return to riding one step at a time.

“My balance is getting better every day, but the challenges with my vision are still hard,” Silva said. “It’s coming back slowly, but I’ll still have surgery on my eyes in November, so I’m excited for that because I just want to be done with it. You don’t appreciate what you have until you don’t have it.”

Though her vision continues to be a daily struggle, Silva said her doctors expect her to ultimately make a full recovery, though no doctor is willing to give a guarantee.

“It’s hard because no brain injury is the same, and I had a very rare injury with bleeding on the mid-brain. Lots of people don’t survive that type of injury because you can’t do surgery on it. I was lucky enough that it stopped bleeding. Because it’s so rare, doctors don’t know exactly what will happen.”

In the meantime, Silva, like Courtney, plans to keep defying the odds, as evidenced by the fact that she’s already riding her U.S. Nations Cup gold medal partner Rose Cha W, owned by the Rose Cha W Syndicate, less than five months after the accident.

“She’s a hot horse, but because I’ve had her all her life, I know her inside and out,” Silva said. “It’s really awesome riding her again, and she takes care of me.”

We wish all the best to Silva as she returns to the show ring today, as well as safe travels Saturday night as she flies to Millbrook for the presentation of the Charles Owen Equestrian Role Model Award to Courtney on Sunday afternoon.

“I’m a huge fan of Courtney,” Silva said. “She was one of the most beautiful riders I’ve ever seen, and for her to go out of her way to make life better for everybody else despite what happened to her is truly amazing.”