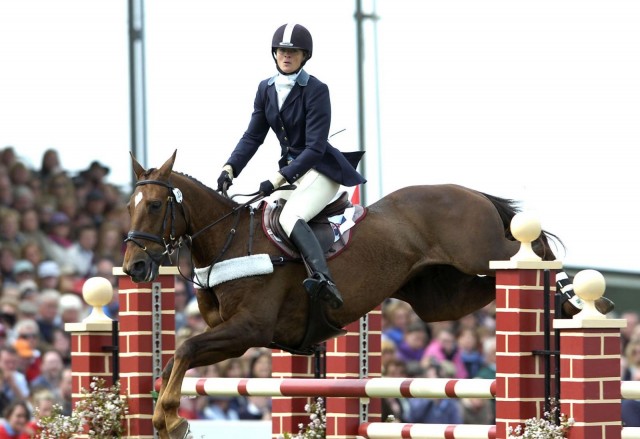 Lucinda Fredericks and Headley Britannia on their way to winning Badminton in 2007. Photo used with permission from Kit Houghton.

The worldwide eventing community continues to mourn today at the loss of Headley Britannia, the greatest mare in the history of the sport and winner of Badminton, Burghley and Rolex. Brit, 21 at the time of her death, was euthanized yesterday. Lucinda Fredericks released a statement on her Facebook page which seemed to imply the cause of death had been an injury incurred while cross-country schooling.

Paul Tapner confirmed the cause of death via his Facebook page, and Lucinda spoke to Horse & Hound to offer more details on this tragic incident. Alexandra Smith, Lucinda’s working student, was cross-country schooling the mare over small fences when she went down after a jump, she told Horse & Hound. The footing was good, and Brit had been jumping well — it was just one of those freak things.

Brit broke the radius bone in her left front leg, and a vet was immediately called out to put her down. Ever the professional, Brit was calm and stoic in her final moments, Lucinda told Horse & Hound. Lucinda had about 20 precious minutes to say goodbye and thank the little 15.3-hand mare for all she’d given her.

What a gutwrenching reminder that our time with our equine partners is so fleeting. For this mare to have jumped around the toughest cross-country courses in the world — and win three of the world’s six CCI4* events — only to fall victim to a small jump in a routine cross-country school seems such an unfair way to go.

But Brit, a fiery little chestnut mare, was never going to be a horse to stand around in a pasture all day in her retirement. She needed a job still, and Lucinda brought a delighted Brit out of retirement last year to compete in the Express Eventing at the CLA Game Fair — which she won, of course.

Ultimately, the most we can do for our horses is to give them the best life we know how each and every day, as we never know when it will be their last. The EN team sends all our condolences to Lucinda, her working student Alexandra, and the whole team who cared for and loved Brit. Rest in peace, brilliant girl.