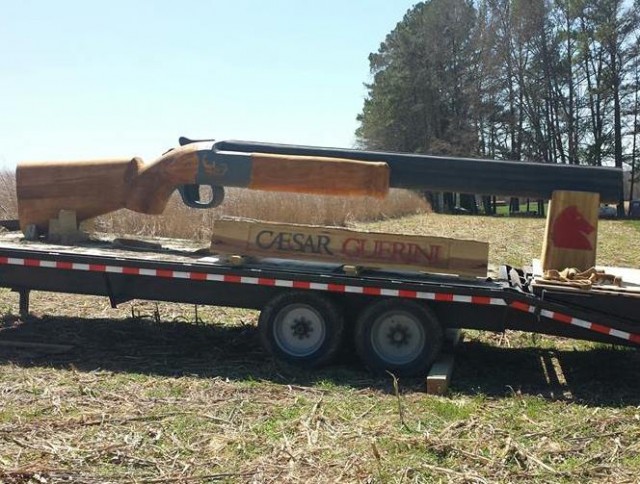 The new Caesar Guerini that will be on the Prelim course at the Fork this weekend. Photo via the Fork Stable's Facebook page.

Good morning EN! Today competitors are settling into stalls at the Fork Stables where festivities are set to begin tomorrow. Nearly 60 combinations are entered in the CIC3* and you will find many top pairs among the entries. While dressage begins tomorrow, unofficial competition kicks off today with the “Shoot for the Stars” contest: teams of four people will compete in a clay shooting contest, and their final scores will be added to the riding scores of two CIC3* riders preselected for each team. On Sunday a winning team will be announced, and the winners will receive awards after the CIC3* awards ceremony. Keep checking back for more updates from North Carolina, as it will definitely be a busy and exciting weekend. [The Fork Website] [Entry Status] [Ride Times] [Facebook Page]

A New Zealand paper reports on Jock Paget’s “limbo” as he waits to defend himself at an FEI hearing later this spring. According to the article, Jock has yet to receive a hearing date yet, and is incredibly frustrated by the entire situation as he sits on the sideline. Equestrian Sports New Zealand boss Jim Ellis said that the time off has been very damaging to Jock in terms of missed financial opportunities, and also that ” there is a strong case to explain why ”he’s done nothing wrong, or he’s morally innocent.'” [Southland Times]

This week on the Eventing Radio Show: Mother-daughter teams in honor of Mother’s Day in the UK. Hosts Jess and Samantha are joined by Mary and Emily King and Laine and Valerie Ashker to talk about their family partnerships. Simon Tucker then stops by to introduce everyone to his product, Mojo Wristbands, and Liz Halliday gives a training tip. [Eventing Radio Show]

A record 72 countries are entered to compete at this year’s WEG in Normandy, France. The competitions will the greatest number of entered countries are show jumping (57 total) and endurance (50 total). Nine countries have entered horses in all of the FEI divisions, and 12 countries will make their WEG debut. Click to see a full list of countries entered and the sports they have declared intent to send athletes for. [Horsetalk]

After Wellington’s withdrawal from consideration, Kentucky and Canada are the sole remaining candidates to host the 2018 WEG. If held in Kentucky, there would be a large positive economic impact on the surrounding area. According to the Lexington Herald-Leader, the state has submitted a signed  signed host agreement with an undisclosed financial guarantee in order to secure its position as a finalist. Official bids will be presented by both Canada and Kentucky, and the decision will be announced afterwards. [Lexington Herald-Leader]

Best of blogs: Meet Sophie Jenman, a British rider who will be contesting Badminton for the first time this May aboard her mount Animo.