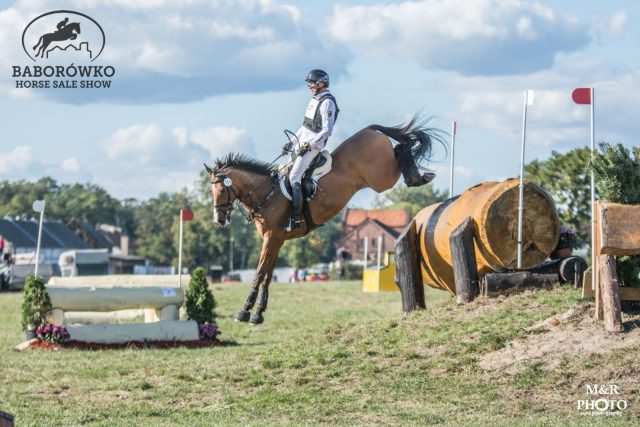 Germany’s Anna Siemer has overtaken the lead following CIC3* cross country at Poland’s Baborówko Horse Sale Show. She and FRH Butts Avondale, an 11-year-old Hanoverian mare (Nobre XX x Heraldik’s Amelie, by Heraldik XX) owned by Dr. Volker Steinkraus, collected 1.6 time penalties to move from second after dressage into first. This pair has plenty of experience at the three-star level but tends to pick up a show jumping rail or two, so Sunday’s finale is still anyone’s game.

Andreas Dibowski, also of Germany, was the only rider to finish clear and inside the time with his mount Wolfsmond, a 10-year-old Westphalian gelding (Alberto II x Ninora XX, by Vif-Argent XX) owned by Inge Langenhan, moving from 10th to second. While Baborówko is only Wolfsmond’s third three-star outing, the horse is an extremely careful show jumper: The pair has had only one rail at an FEI event over the course of the past three years, so we may well see them move into the lead today.

In third after cross country is Elmo January of Finland with Soraya 243, a 10-year-old Oldenburg mare (Seigneur D’Alleray XX x Caipirinhia, by Cordalme) owned by Roer Boekmann, who made a big jump up from 16th place. Clearly the leaderboard endured some major reshuffling thanks to an influential cross country day. Yesterday’s dressage leader, Poland’s Mateusz Kiempa with Lassban Radovix, picked up 16 time penalties to drop to 9th.

Germany’s Ben Leuwer and C’est La Vie 135 have retained their lead after CIC2* cross country, and Josephine Schnaufer with Ronaldo is still in second. Kari Ingrid Gunzenhauser moved up from fourth to third with Let’s Dance 73. Poland’s Pawel Spisak and Paco still lead the CIC1*.

Baborówko continues with show jumping today. All international classes are streamed live on Facebook, Youtube and at the official Baborówko Horse Sale Show website, as well as at ClipMyHorse — and for your convenience we’d embedded it right here as well.