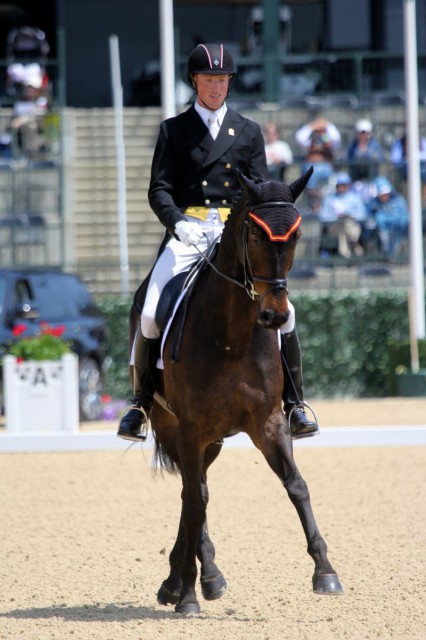 Crown Talisman came to Doug Payne’s barn in 2008 not knowing much about the sport of eventing. Doug has remarked in the past that Tali, a 2003 Holsteiner/Thoroughbred gelding owned by Doug and Larry and Amelia Ross, exhibits many traits of a brilliant horse, including but not limited to having quite a few quirks and eccentricities in his personality. Doug, and many others, have said that it is almost frightening how good this horse has become and how much his talent has yet to emerge.

This year, Crown Talisman has placed outside of the top five just once, most recently notching a win in the CIC3* at Jersey Fresh in his final prep for Saumur. This horse has the skill to put himself in a competitive position after dressage, and is quite keen in both jumping phases, which has turned him into a true force to be reckoned with at the Advanced level.

Now, Tali is currently on his first international trip, thanks to a Land Rover travel grant to compete in the CCI3* at Saumur this weekend. While Tali is a creature of habit, he has settled in well in France, and we are looking forward to seeing this powerhouse pair compete.

You can keep up with Doug and Tali’s Saumur adventures on Doug’s blog, which he has also graciously allowed us to repost here. In the meantime, check out Tali’s rise to the top in video form. His first dressage test, from 2009 at Beginner Novice, is solid proof that hard work and talent are truly a recipe for success.

And if you missed Doug and Tali’s dressage test at Rolex, check it out on the USEF Network here.